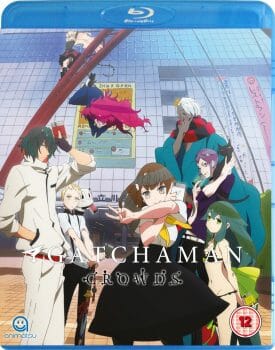 We had five young “space ninja” employed by an international organisation to battle against alien terrorists. The battles, Galactor, were led by an androgynous villain called Berg Kattse.

Since the days of G-Force and Gatchaman there have been numerous sequels. The latest is Gatchaman Crowds which is set in 2015. It’s a new take on the drama with a new Berg Kattse.

Geek Native have 3 copies of Gatchaman Crowds on blu-ray to giveaway! To enter just log into the widget below using Facebook or email (so we can contact winners), answer the poll and earn your entries into the prize draw. Really want to win? Super much? Check the widget again after you complete the poll for other ways to earn entry points.

Tabletop & RPGs A Beautiful Nightmare: A Review of Iron Kingdoms U…

Geek Stuff Oh my! It’s a latex tentacle Ursula gown
💰 Copper Coins 💰 Geek Native is an affiliate and may earn commission on purchases you make from third-party sites.
🍪 Privacy & Cookies 🍪 The site uses cookies to survive. By accessing the site, you agree to use your browser to control cookie use or take 1d4-3 privacy damage (tracking). If you defeat cookies via ad blocking, please consider the Patreon. An intro to cookies, and how to control them, can be found here. I Manage Cookies