You are here: Home / Games / Tabletop & RPGs / A Beautiful Nightmare: A Review of Iron Kingdoms Unleashed 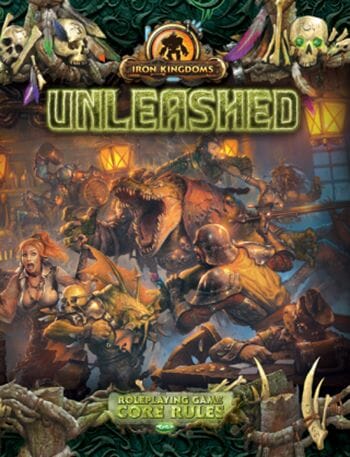 Though the current trends in tabletop roleplaying are for loose, flexible designs…games like Numenera, Fate Core, even (arguably) the latest edition of Dungeons & Dragons…there is still a very large part of the hobby devoted to the meticulously-detailed games of yore. With roots firmly tracing back to the hobby’s wargame origins, games like Pathfinder and Shadowrun continue to draw massive crowds and have large, passionate gamer communities. Iron Kingdoms is one of the latest games to enter this latter side of the spectrum, and Unleashed, its latest corebook, is everything one would expect it to be…for better or for worse.

Whereas 2013’s Iron Kingdoms Full Metal Fantasy Roleplaying was based on the industrial, urban environments of Immoren, Iron Kingdoms Unleashed focuses outside of civilization: the thick forests, deep swamps, and wild jungles of the world. Life in the world of Iron Kingdoms Unleashed is much darker, and the moral spectrum has many more shades of grey than the swinging steampunk adventures of its brother game. This is made clear throughout the 100+ pages of history, geography, and anthropology thrown at you immediately as you open the book. Like Full Metal Fantasy, Unleashed begins with a crash-course in the game’s world of Immoren, going into meticulous detail of the world’s thousands of years of conflicts, technological advancements, and the rising and falling of various fantasy empires. Appropriately, the history lessons keep the feral nature of Unleashed at the center of its arc, so that even a Full Metal Fantasy veteran can get some valuable context in its portrayal within the pages of Unleashed.

Rather than going the sourcebook route of its contemporaries like The One Ring, publisher Privateer Press has chosen to go the “standalone expansion” route with Iron Kingdoms Unleashed, akin to White Wolf/Onyx Path Publishing’s Monster: the Monstering games. Instead of a one- or two-hundred page sourcebook, Unleashed is a sub-500 page beast with its own full core rules, completely compatible with Full Metal Fantasy. Why Privateer Press chose to do this is unclear to me. With Onyx Path, the logic is fairly sound: some people want to play vampires, some people want to play werewolves, and the histories and cultures and powers and what-not are different enough to warrant separate games. Here, however, the difference is not quite as profound. There are different races, archetypes, magic, and equipment in Unleashed, and most all of it is fantastic (Alligator-men!) but is a reprint of the core rules here absolutely necessary? Will there be a large crowd of Unleashed fans who won’t already be in deep with Full Metal Fantasy?

Regardless, extra sets of rules are probably handy, since Unleashed is using the same heavy ruleset as its predecessor. Task resolution is 2D6 plus a Bunch of Numbers, coming from various attributes, skills, environmental factors, and other such things, versus a Target Number. Characters have Feat Points that are used to power various abilities. Certain characters can control Warbeasts, living equivalents of Jacks from Full Metal Fantasy, and they have their own stats and mechanical considerations, as well. Combat is presented with the assumption that your group will be using minis (unsurprising, given Iron Kingdoms roots as a wargame) and ranges are often given in inches as well as feet. Health is presented as a “life spiral,” this bizarre contraption that basically grants you hit points based on your three fundamental attributes, and damage is randomly assigned to one leg of the spiral and travels down one spine and then leaps to the other, granting wound penalties of various kinds along the way.

All of this adds up to a gaming experience that is fundamentally old-school…not original Dungeons & Dragons old school, but D20 System old-school. If you haven’t had enough of the ol’ “Math by a thousand papercuts” approach to combat and roleplaying, then Iron Kingdoms in either of its core configurations will be right up your alley. If you’re a fence sitter hoping that Unleashed will be a more mechanically-gentle entry into the rich world of Immoren, keep sitting.

Everything about Iron Kingdoms Unleashed is hardcore. Learning the rules has a steep curve. Learning the intricacies of the world requires time and patience. Even plunking down $30 for the pdf at DriveThru is a steep price. But you definitely get what you pay for: the rules are complex but comprehensive, the world is detailed but fascinating, and the book is expensive but absolutely gorgeous. Iron Kingdoms Unleashed, like Iron Kingdoms Full Metal Fantasy before it, is absolutely not for everybody, but if it’s for you, it’s going to really, really be for you.

Note: My copy of Privateer Press’ Iron Kingdoms Unleashed was provided for review.

A Beautiful Nightmare: A Review of Iron Kingdoms Unleashed