You are here: Home / Books / High fantasy steampunk: A review of Girl Genius – Agatha H and the Voice of the Castle 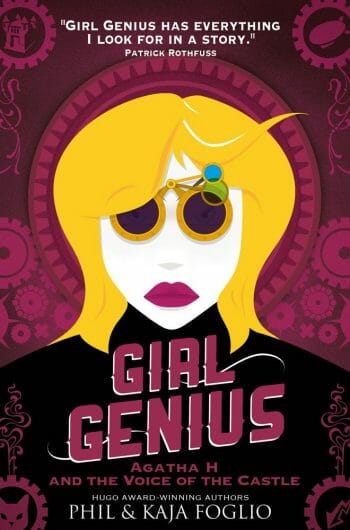 Girl Genius – Agatha H and the Voice of the Castle

Girl Genius – Agatha H and the Voice of the Castle is the third in the Girl Genius series by Phil and Kaja Foglio and at just about 600 pages long the fattest book yet.

I really enjoyed the first two books. We still joke about minmoths here. I’m aware of the original Girl Genius comic book series and the covers are now my mental image of Agatha but I’ve avoided reading any of them. I suspect it’s a challenge taking a serial comic strip, turning it into a book and working out when to say “Right, stop here; next book”.

The first two Girl Genius books had pretty good finishing points. You were left wanting more. Annoyingly, the largest of the three – Castle – finishes on an even more dramatic cliffhanger. “Noo! Just a few more pages”. I liked the book but I don’t think I got the resolution I needed. Drats.

I keep on thinking of RPGs when I read Agatha H. I think we started off with low level characters getting caught up in dramatic events. We’re three books in and the characters are now the dramatic events. In gamer terms it feels like Level 1 to Level 15 in just three adventures. It’s a whirlwind ride.

The rest of the review is a little spoilery for the first two books. Be warned.

I’m not entirely comfortable with the Mongfish switcheroo as the main threat to Agatha. I want to read about Agatha. I don’t mind if bad things happen to good characters – I read George R.R. Martin after all – but I do worry about this one. Perhaps this is exactly as I’m supposed to fell this way as the only real risk to someone who could be as powerful as Agatha is Agatha herself. This tome plays on that fear.

What we have is Agatha being dropped into a powerful and dangerous castle – a giant clank, if you want – and up against a horde of prisoner Sparks, traps and dangerous creations. It doesn’t feel that much of a challenge to Agatha. It’s the other headline Sparks, like the Baron, who are the real risk. It’s the interaction between the characters that is the real charm.

Who’s going to grumble when Agatha builds herself a death ray and goes charging around the castle with it? The Castle isn’t a fan but then he needed to be taken down a peg or two. Agatha’s disappointment when the device ran out of power was one we all shared.

If you liked the first two books then you’ll like Girl Genius: Agatha H and the Voice of the Castle. If the phrase “high fantasy steampunk” catches your interest or the idea of a high-power adventuring party with lots of inter-character dynamic is something you’re curious about then I’d recommend buying Agatha H and the Airship City. This is Fringe meets steampunk and I’ve never encountered anything else like it.

Disclosure: My copy of Girl Genius – Agatha H and the Voice of the Castle was provided for review. Phil and Kaja Foglio, Titan Books and on sale in the UK since November 2014.

High fantasy steampunk: A review of Girl Genius – Agatha H and the Voice of the Castle