You are here: Home / Books / A review of Girl Genius: Agatha H and the Airship City 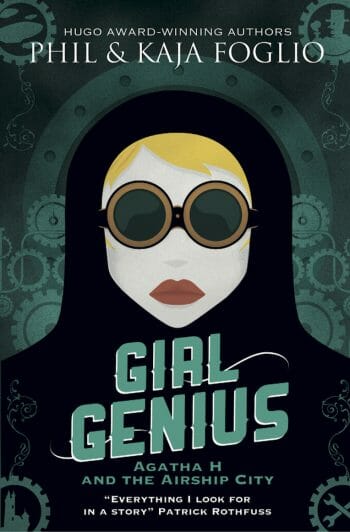 The mad science of Fringe meets steampunk. Fringe at its most zany meets a pre-Victorian Europe with steampunk inspired tendencies, at least. The promise of Agatha H and the Airship City was strong from the outset.

However, the geek heritage of Girl Genius is richer than just a clever idea. Girl Genius is already a huge series. I know the comic because there’s always a Girl Genius edition in the hot sellers chart at DriveThru Comics, often in number one. The comic was born (and continues) as a web series at girlgeniusonline.com. Now that I’ve read and thoroughly enjoyed Agatha H and the Airship City I must now wrestle with whether to read the comics too. Sticking to the books allows me to keep my mental images of the characters and avoid spoilers but Girl Genius is a series I want to dive into.

Fans of the comic series have no such dilemma. You should also read the novels. The Foglios can write.

Girl Genius: Agatha H and the Airship City is a book with a spoiler in the title. However, just like John Dies at the End once you start reading you stop thinking about what the title might mean.

Agatha has a place as a lab assistant in the University run by a mad genius. This is a Europe (or Europa as its called) which is ruled by mad geniuses – known as Sparks. This is a good job until an inspection goes horribly wrong and she’s fired.

Agatha’s mugged and on the same day too. When a pair of soldiers take Agatha’s locket it seems to unsettle her adoptive parents more than it does her. The fact that her adoptive parents are Constructs, Frankenstein’s monster style assembles, built from body parts who are hiding in plain sight in the city had an interesting twist to their reaction.

On top of it all, the Sparks of Europe, while warring amongst themselves, face a sinister and significant threat from an enemy known as The Other. Attacks from The Other can take down even the hardiest of Spark empire, smash castles to splinters and convert survivors to Revenants who obey their new master.

I thoroughly enjoyed this version of Girl Genius. This book was an easy read, the plot wove forward at exactly the right pace, satisfied and yet hinted a lot more to come.

For the authors there must surely be advantages in writing up an adventure you know so well, already, and know which scenes are helpful for the future. As a reader I benefited from that extra insight that Phil and Kaj Foglio had however, as a reader, I also think I benefited from the fact I knew this was a comic at first. As I read I could picture how the scenes would look when drawn and that added incredibly to my Girl Genius experience.

My copy of the book was provided for review. Girl Genius: Agatha H and the Airship City, £7.99, Phil and Kaja Foglio. Titan Books.

A review of Girl Genius: Agatha H and the Airship City

Tabletop & RPGs 50 Years of Doctor Who: Cubicle 7 offer a subscrip…
wpDiscuz
💰 Copper Coins 💰 Geek Native is an affiliate and may earn commission on purchases you make from third-party sites.
🍪 Privacy & Cookies 🍪 The site uses cookies to survive. By accessing the site, you agree to use your browser to control cookie use or take 1d4-3 privacy damage (tracking). If you defeat cookies via ad blocking, please consider the Patreon. An intro to cookies, and how to control them, can be found here. I Manage Cookies