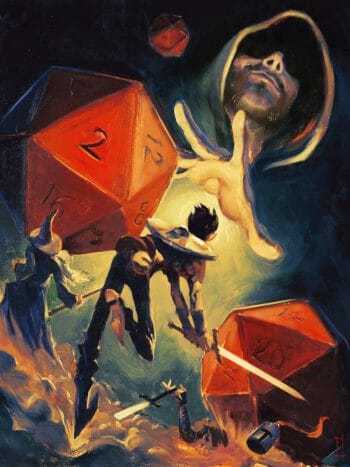 It’s not always easy being a GM. You’ve a game to prepare, a world to create and in addition to plot, combat and other in-world intrigue you also have the real world to deal with when it comes to players, scheduling and even finding a venue.

Wizards of the Coast’s latest book in the D&D range, the Dungeon Master’s Guide begins with some helpful advice to new DMs. It urges “Know Your Players”.

Inspired by that advice I took the question; “What are three common mistakes new GMs make?” to Reddit and the Roleplaying Games community on Google+. The post started off with three suggestions and the community was asked to add others.

What would you add?

Here’s what the community added;

Do you agree with everything here? A question to consider is – should the GM guide a plot and have a strong story? Or does the story come from the collaboration between the GM and players?

Art 6 illustrations to inspire the GM in you by Nicola…
💰 Copper Coins 💰 Geek Native is an affiliate and may earn commission on purchases you make from third-party sites.
🍪 Privacy & Cookies 🍪 The site uses cookies to survive. By accessing the site, you agree to use your browser to control cookie use or take 1d4-3 privacy damage (tracking). If you defeat cookies via ad blocking, please consider the Patreon. An intro to cookies, and how to control them, can be found here. I Manage Cookies