You are here: Home / Books / Out of this world: A review of the Art of Jim Burns – Hyperluminal 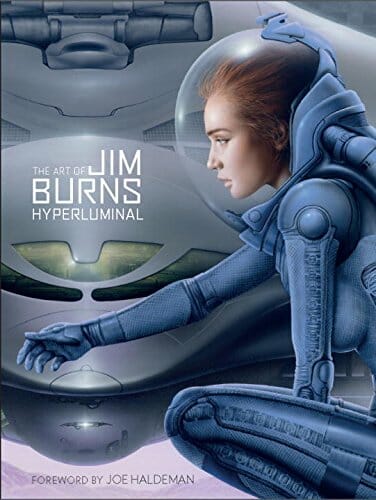 The Art of Jim Burns: Hyperluminal

Hyperluminal may be one of my favourite art books of the year. It contains an almost perfect blend of sci-fi and fantasy, the art is bold, graceful and stunning. Just as Jim Burns’ range of otherworldly illustrations is carefully balanced so is the mix of art and commentary.

I’m not sure I believe in the concept of a “coffee table book” – ie, something that you might not read but which is designed to entertain (or impress) any guests who might visit. You’ll want to read Hyperluminal and then revisit often. That said; this feels like a perfect book for having on the gaming table as you wait for the whole group to turn up or even for character generation and inspiration.

Burns draws with curves. I think there may be a secret whisper in every illustration and I suspect the way to hear it is to listen to the slopes, shades and curves that bring these high-reality pictures to life.

We’re lucky. Geek Native was able to host a small gallery of official art from Hyperluminal back in October. Visit the look inside: Hyperluminal to see the quality.

We also see some of the names that Burns has worked with. Freeway Fighter is a project for Ian Livingstone – that Ian Livingstone; Fighting Fantasy, Edios and Lara Croft. The Xianth illustration, a personal project, shows just how imaginative Burns can be. While the characters in Planet of Peril, a private commission, hint at the sensual undertones found in many of his illustrations.

Burns has worked with the likes of George R. R. Martin, Terry Pratchett, Anne McCaffrey and Neil Gaiman. The Art of Jim Burns: Hyperluminal is compiled from over 40 years of work. It’s a stunning collection and it’s no surprise that Burns has a Hugo to his name; actually – he has three. What is a surprise is that he’s the only non-American artist to have won it. This is an important collection for British sci-fi art.

This would make a fantastic Christmas gift. This is a strong portfolio and an impressive book. Recommended.

The video tour below was made via smartphone photography and with Google+’s Auto Awesome. It uses colour filters and doesn’t have enough quality to show the pictures fairly but does, at least, offer a peak between the covers.

My copy of The Art of Jim Burns: Hyperluminal was provided for review. The hardcover was published by Titan Books in September 2014.

Out of this world: A review of the Art of Jim Burns – Hyperluminal

Geek Stuff 19 harmed after gas attack on furries and cosplaye…

Geek Stuff Short film: The Escape
💰 Copper Coins 💰 Geek Native is an affiliate and may earn commission on purchases you make from third-party sites.
🍪 Privacy & Cookies 🍪 The site uses cookies to survive. By accessing the site, you agree to use your browser to control cookie use or take 1d4-3 privacy damage (tracking). If you defeat cookies via ad blocking, please consider the Patreon. An intro to cookies, and how to control them, can be found here. I Manage Cookies