You are here: Home / Movies / Tomorrowland’s trailer will intrigue but it’s not Star Wars

Disney have a themepark called Tomorrowland and they’re working on a movie too. Once rumoured to be a Star Wars film we can now see that’s not true but there is sci-fi here.

George Clooney and Britt Robertson star. They can access a place called Tomorrowland and while they visit their actions have a direct affect on the other world.

The film was written by Damon Lindelof (Lost) and directed by Brad Bird (The Incredibles, Mission Impossible: Ghost Protocol). Bird’s next film is likely to be The Incredibles 2.

Tomorrowland’s trailer will intrigue but it’s not Star Wars 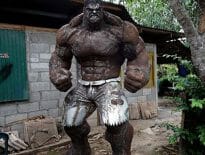