You are here: Home / Games / Tabletop & RPGs / The Last Parsec and Eris Beta-V

The Last Parsec is a Savage Worlds sci-fi from Shane Hensley’s Pinnacle Entertainment. As this post goes live there’s still about three weeks to run and the Kickstarter is about %600 funded. That’s about $48,000 raised on an $8,000 ask.

Since races, technology, ships, creatures and core elements like that are part of the required Science Fiction Companion Pinnacle are not going over old ground with a core book first. Instead they’re going to do three setting books. These are Leviathan, Scientorium and Eris Beta-V. After the Kickstarter video you’ll be able to read a short Q&A with Matt Cutter – author of Eris Beta-V for The Last Parsec.

Matthew Cutter was raised on a steady diet of 1980s comic books, role-playing games, scifi, horror, and Westerns—fare that left him eminently well-prepared for his role as Deadlands Brand Manager. Some folks call him “Big Bug.” Writing credits for Pinnacle include The Flood, The Last Sons, Return to Manitou Bluff, Stone and a Hard Place, and several Trail Guides for Deadlands, and Eris Beta-V for The Last Parsec setting.

What influenced you in writing Eris Beta-V?

Broadly, the countless science fiction and horror stories I’ve absorbed over the years. For example, in the opening chapter (a JumpCorp recruitment pitch), I was trying to emulate the ultra-patriotic yet satirical tone of Verhoeven’s Starship Troopers. But I was also trying to recreate the wonderment I felt the first few times I played TSR’s Star Frontiers. To prepare, I read most of the first edition material for that game, especially the Volturnus series. I wasn’t looking for specific items to lift, but rather to figure out what made it work so well. The themes of exploration, mystery, and first contact with alien cultures are all there. Although I did give some space pirates an assault helicopter … because that adventure rules!

Definitely not. I’m not a big fan of monocultures in science fiction, so in Eris Beta-V you’ll find all kinds of characters. Some are heroes and some are villains, but not simply by virtue of being JumpCorp-affiliated or of a certain species. Lots of different people are trying to get what they want, and they try to use the player characters in various ways. For the heroes, digging through all those layers of mystery hopefully leads to a satisfying conclusion and a solved mystery. But even solving that overarching mystery opens up the setting to further adventures. There are a lot of possibilities orbiting Eris Beta-V.

Eris Beta-V is a “warm” gas giant, with two relatively young asteroid rings and a host of moons. Each moon is a world to explore, plus there are a pair of huge JumpCorp space stations, pirates, asteroid mining, and the scattered remnants of an extinct alien race. Nearly any variety of hero might be found there, and the possibilities for exploration and adventure are virtually endless.

The art above is from Igor Vitkovskiy whom Pinnacle are working with on The Last Parsec. You can see much more of the Ukraine’s work up on his Deviant Art page. He’s a flare for sci-fi style.

The pledge levels in the Kickstarter reflect the size of the project. The first tier at which gamers access any of the game content is $35. That amount of backing unlocks all three system books in PDF plus all the digital stretch goals. There’s no other missing around. If you just want the miniatures coming for the game (including bonus figures in the stretch goals) then that’s a $60 pledge. A popular tier currently is the $70 one which unlocks both the PDF and softback books.

More information is available over at the Kickstarter page.

The Last Parsec and Eris Beta-V 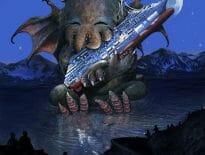 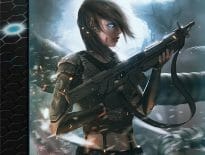