You are here: Home / Games / Tabletop & RPGs / A New Way for an Old System: A Review of Nova Praxis, Savage Worlds Edition 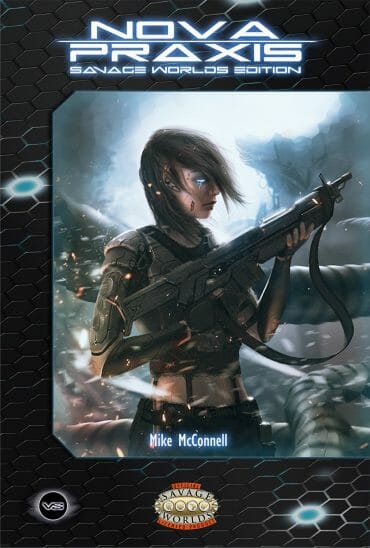 For those of you who just want to hear the bottom line, here it is: Nova Praxis: Savage Worlds Edition is more or less exactly what you would expect. If you like the freaky transhuman setting but don’t like the Fate system, then the Savage Worlds take on it may be more your cup of whatever-beverage-people-in-transhuman-sci-fi-prefer. If you like the Fate system and are wondering if picking up the Savage Worlds conversion is worth it for the extra setting material, I would say wait for the upcoming Nova Praxis GM Companion, Machinations. For those of you who are on the fence, or don’t know enough about the setting and/or game system to decide, read on.

Nova Praxis is “the other transhuman sci-fi setting.” The first one, Eclipse Phase, made a huge splash in 2010. Eclipse Phase did not invent the sub-genre, but it was one of the biggest (if not the biggest) standalone RPG on the subject to date. It’s wildly creative, no-holds-barred ideas, combined with slick production values, made the game an instant classic. But the system can be complex and unwieldy, and the ideas are so crazy that they can be hard to fully assimilate into one’s head. Nova Praxis, wittingly or not, is a more conservative take on the material. The fundamental ideas of a transhuman setting (uploading minds into different bodies, living in virtual realities, a post-scarcity economy where replicating stuff out of thin air is possible) all still exist, but the more complicated ideas (the majority of humanity being software, being a swarm of nano-robots, artificially-evolved animals) are minimized. Those concepts still exist in Nova Praxis, but an interstellar law known as the Humanity Preservation Act keep those instances rare.

(There’s also “the new kid on the block,” Mindjammer, which as of now I haven’t read. It is on my reviewing queue, though. Stay tuned!)

Nova Praxis also brings some more conventional sci-fi tropes into the mix. Most of the known world(s) are ruled by the Coalition, a…well, coalition…of several mega-super-duper corporations known as Houses. Though these Houses present a unified front for the masses in the form of the Coalition, behind the scenes, they of course hate each other, and constantly plot and scheme against one another in a never-ending dance-off for power. Your PCs, in the default campaign, are agents in this “Shadow War,” using their connections with various elements of transhuman-society to help…or hinder…others.

Whereas Eclipse Phase has a traditionally number-heavy, percentile-based, simulationist system running it, Nova Praxis is intended to play in a more story-focused fashion. The original version of the setting ran on a modified version of the wildly popular Fate system. Mike McConnell, the creator of Nova Praxis, said he’d considered Savage Worlds for his setting for quite some time, and now that the Fate version has proven successful, he’s gone back to see what he can do with it. Savage Worlds, for those of you not familiar, is a fast, furious, and fun (those three adjectives are literally its design philosophy) game system. It uses variable dice to measure its technical bits, not unlike Cortex Plus, but unlike that game has a more procedural-feel to it. The end result is a game that plays quick on its feet like a story game, but with the crunch and dice-rumble a more traditional RPG gamer may crave.

Adding this setting with this system equals, as said before, exactly the sum of its parts. Weighing in at over 300 pages, Nova Praxis: Savage Worlds Edition is exceedingly well-written, absolutely stuffed with world details, and has all the new Edges, Hindrances, skill adjustments, and special rules one could possibly need to run an entire campaign. Savage Worlds gamers now have a deep transhuman sandbox to play in, and Fate fans yearning for something more D&D-like now have a fine alternative. If any of this sounds interesting to you, then go ahead and pick it up. You will not be disappointed.

My copy of Nova Praxis: Savage Worlds Edition was provided for review.

I got the original book. The setting is interesting but the leveling mechanics is pointless.

Thank you for the review.  It has helped me decide to go ahead and buy the Savage World’s version.

A New Way for an Old System: A Review of Nova Praxis, Savage Worlds Edition 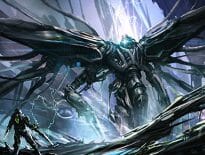 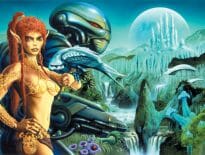