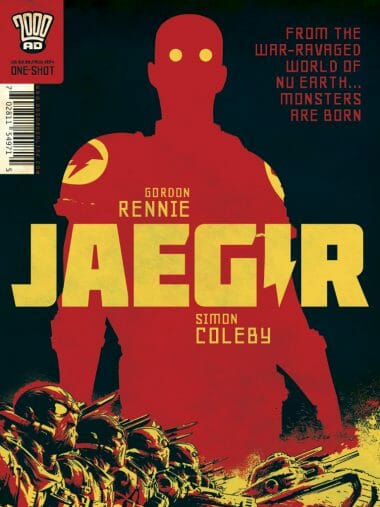 Jaegir is a one-shot in the US-format from 2000 AD. The comic book is written by Gordon Rennie (Department of Monsterology), drawn by Simon Coleby (The Royals), coloured by Len O’Grady and lettered by Simon Bowland.

Importantly, although Jaegir is a one-shot it is set in the same universe as the classic 2000 AD Rogue Trooper. This is a future fascist fate in which there’s an ongoing war between the Southers and the Norts. Our hero, or anti-hero, is the battle-scarred female war-crimes investigator; Kapitan-Inspector Atalia Jaegir.

Kapitan-Inspector Atalia Jaegir is part of the Nordland State Security Police and therefore charged with the responsibility of hunting down war criminals and rooting out corruption.

The one-shot kicks immediately into action as Jaegir seems to be racing through dangerous territory and in hot pursuit of a dangerous humanoid. This is a great way to grab your attention but it leads just as quickly to a plot twist. As it turns out Jaegir’s adventures won’t be hunting down war criminals and the corrupt in the army but up against the mutants known as the Strigoi.

It’s been years since I’ve dabbled in Rogue Trooper and I’m certain I’d fail any knowledge test on the world. Fortunately, the writing in Jaegir looks after me. Characters explain that the Norts dabbled with biochemistry and attempted to create super soldiers. It’s also explained that some of the family lines in Nordland have fault and that sometimes their people evolve into the powerful strigoi mutants. The strigoi are usually especially keen to slay their own kind.

There’s some 35+ pages in Jaegir and that’s not much room for flashbacks or side plots. What we do get is a change of pace as the Kapitan-Inspector finds herself going up against a strigoi she used to know.

The one-shot manages to hint at the depth of world-lore available to the Rouge Trooper universe, build Kapitan-Inspector Atalia Jaegir as a character worth following and indicates hardship and adventure in equal measure ahead for Jaegir.

I’m not surprised that 2000 AD are finding plenty of success and appetite for these one-off adventures. Great storytellers and illustrators abound for 2000 AD and these one-shots appeal both to loyal readers and geeks like me who struggle for time and therefore appreciate these spotlight events as a way to stay in touch with the universe.

I enjoyed the adventures of Jaegir. This is a great comic book for staying in the 2000 AD loop, enjoying the world of Rogue Trooper and getting up close and dangerous with the grim future.

My copy of Jaegir was provided for review. The one-shot is out on Wednesday the 27th of August.

2000AD is currently running the follow-up to this story. It’s rather enjoyable so far.

Grim, dark and compelling: A review of 2000 AD’s Jaegir