Are you running a future or alternative world RPG? Looking for building designs that will help your world feel very different from the world of today? Good news. The design and architecture site Evolvo has ran a competition to design futuristic skycrapers every year since 2006. There are very many impressive entries.

This blog post looks only at the entries from 2014 back to 2011 or so and pulls out those designs and concepts which might interest a Games Master of a modern day or sci-fi RPG the most. Each picture has a quote from the designer and a link back to where you can read more information. You’re bound to pick up some building inspiration from this list. 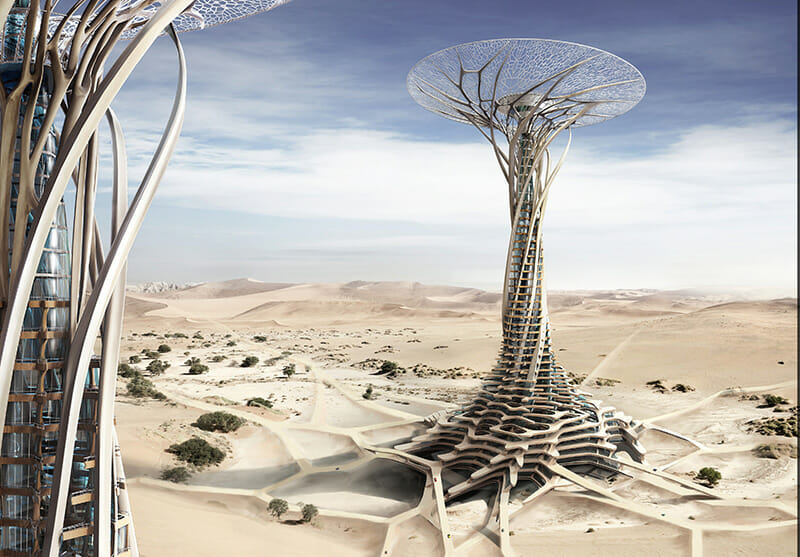 Sand Babel is a group of ecological structures designed as scientific research facilities and tourist attractions for the desert. The structures are divided into two parts. The first part, above ground, consists of several independent structures for a desert community while the second part is partially underground and partially above ground connecting several buildings and creating a multi-functional tube network system. 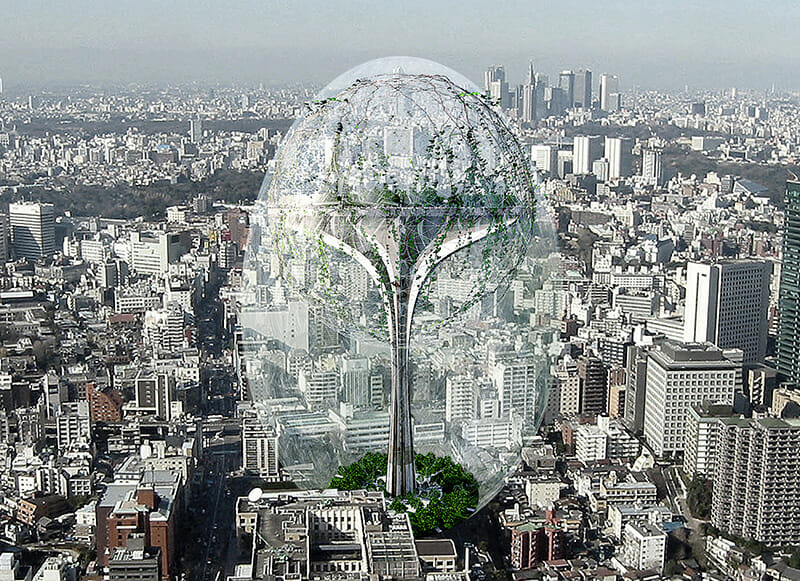 The Climatology Tower is a proposed skyscraper designed as a research center that evaluates urban meteorology and corrects the environment through mechanical engineering. The skyscraper analyses microclimates within cities as a result of the use of industrial materials, the accumulation of buildings, and the scarceness of open spaces. 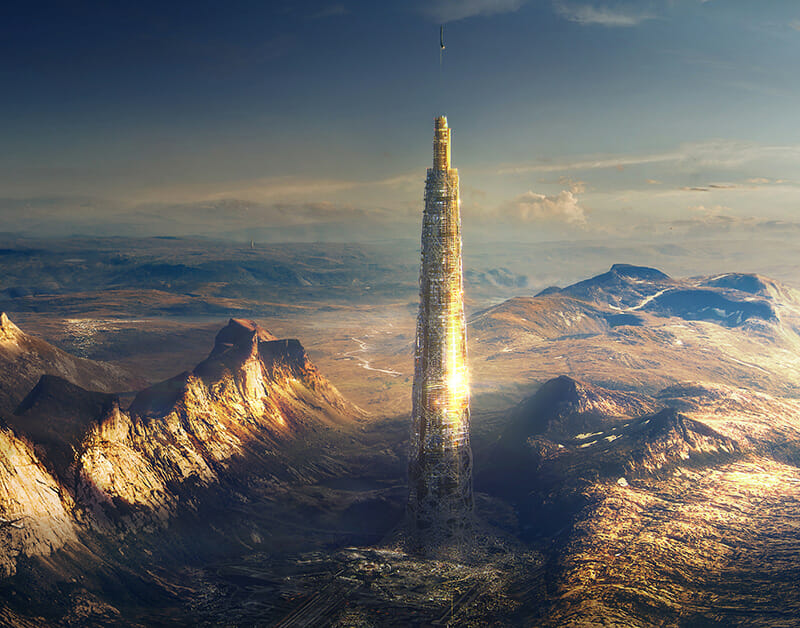 A cylindrical matrix of super tall structure centered on an electromagnetic vertical accelerator to eliminate the hydrocarbon dependency of aircraft during takeoff. The radical re-interpretation of the skyscraper format provides hyper density in an organic and adaptive habitat. 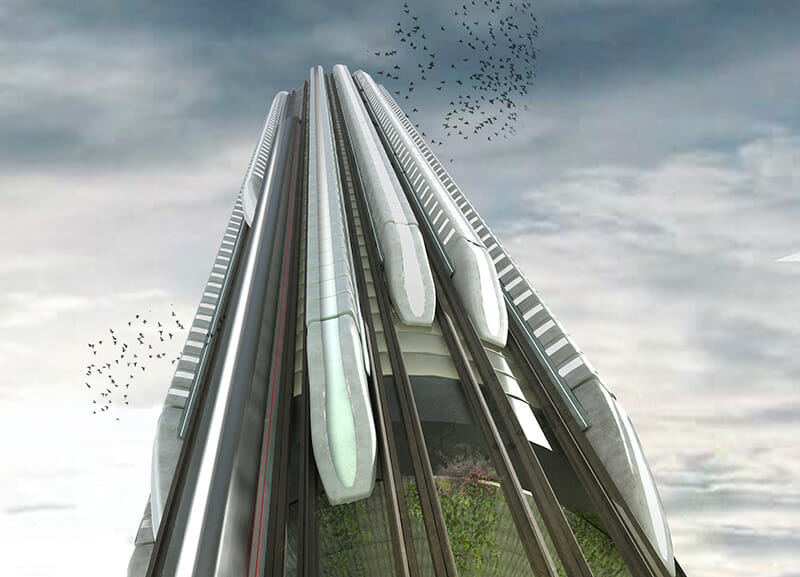 The cinematic vision of hyper speed rail was once a phenomenon. However, nations from around the world from the USA to UK are again consolidating futuristic proposals for an advanced public transport network, to maximize the economic growth of their cities. 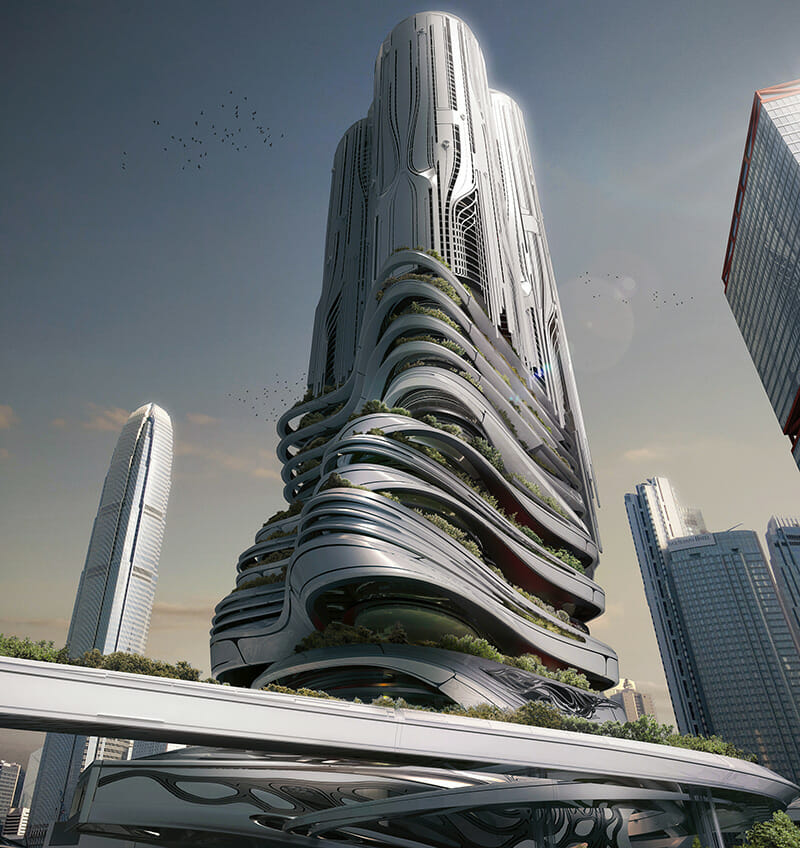 Located at the water’s edge next to the Macau Ferry Terminal, the tower’s design varies in both its circulation and organization to control the speed at which it receives and negotiates the flow of traffic to optimize movement around and inside the structure. 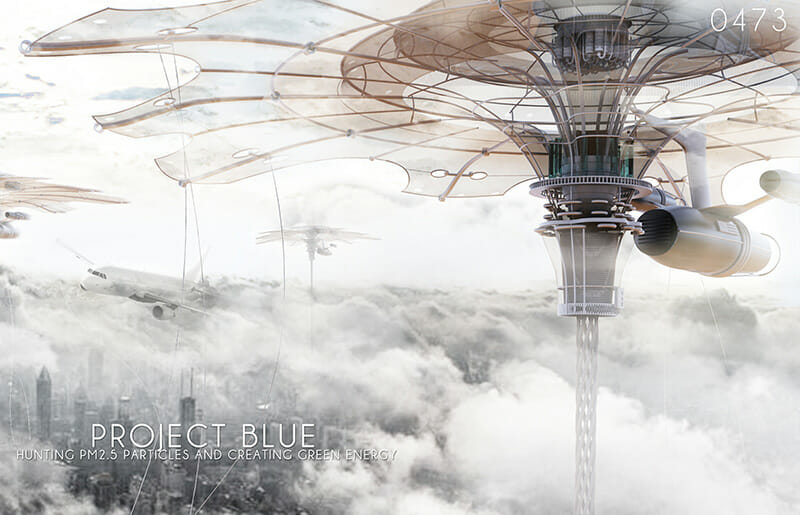 Chinese cities are now characterized by an unhealthy hazy weather as the result of large amounts of suspended particles in the air. The purpose of Project Blue is to transform suspended particles into green energy by creating an enormous upside down cooling tower with a multi-tubular cyclic desulfurization system that produces nitrogen and sulfur. 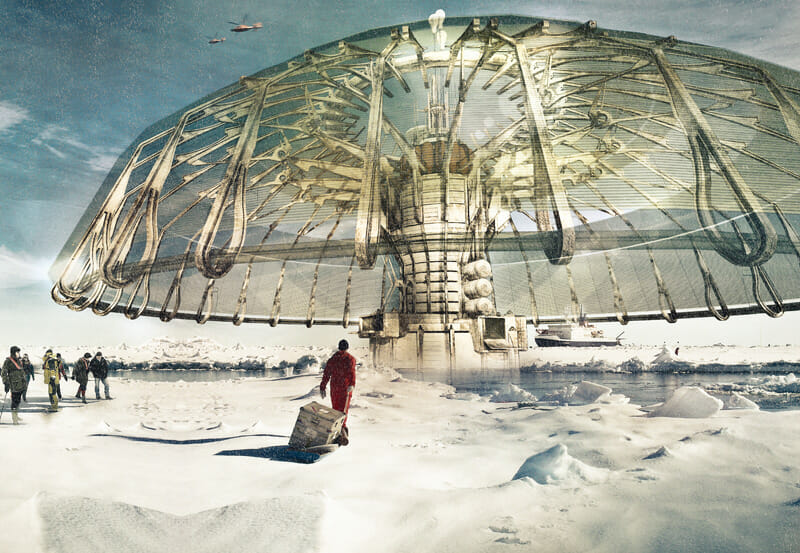 During the last decades of global warming, the polar ice caps have experienced a severe rise in temperature causing the northern and southern ice shelves to become thin, fractured, and melt into the ocean. Rebuilding the arctic layers is the primary objective of this proposal which cools down the Earth’s surface by reducing heat gain in vulnerable arctic regions. 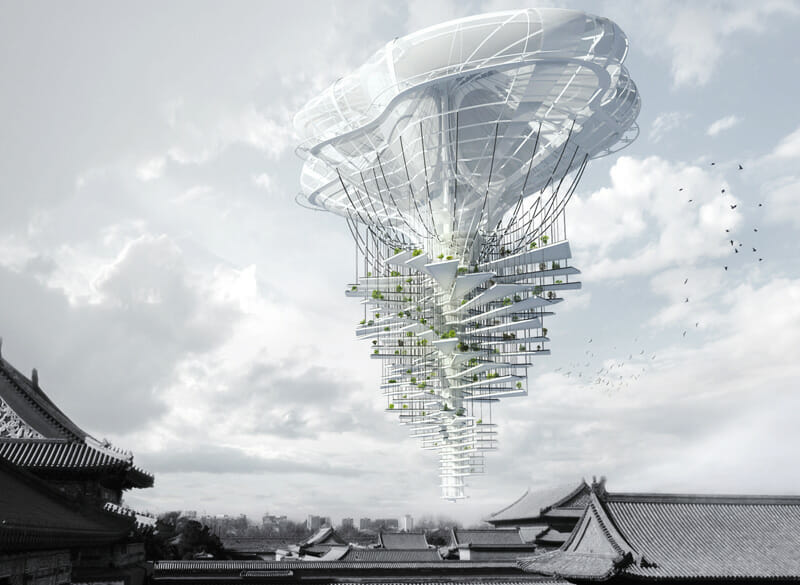 The rapid increase of population within the major cities around the world has led to poor development and serious urban design problems, including the lack of infrastructure, housing, and recreational areas. In Beijing, a large portion of the historic center has been demolished. 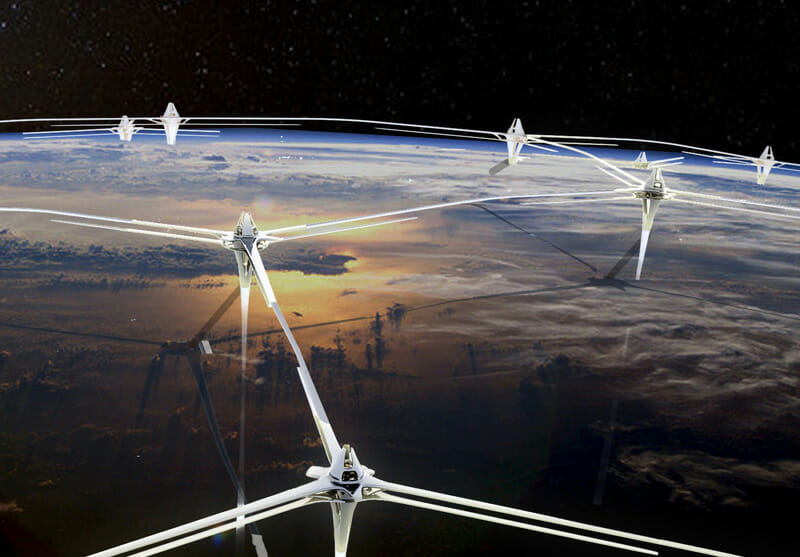 The project proposes a mega hex grid that evolves around the earth circumference at a stratosphere heigh, the principle that support this hypothesis is that it seem to be that in a building the larger the span is, the scale and the unstableness will proportionally increase. But if the span is large enough within the scale of the earth, the unstableness brought by the size decreases inversely. 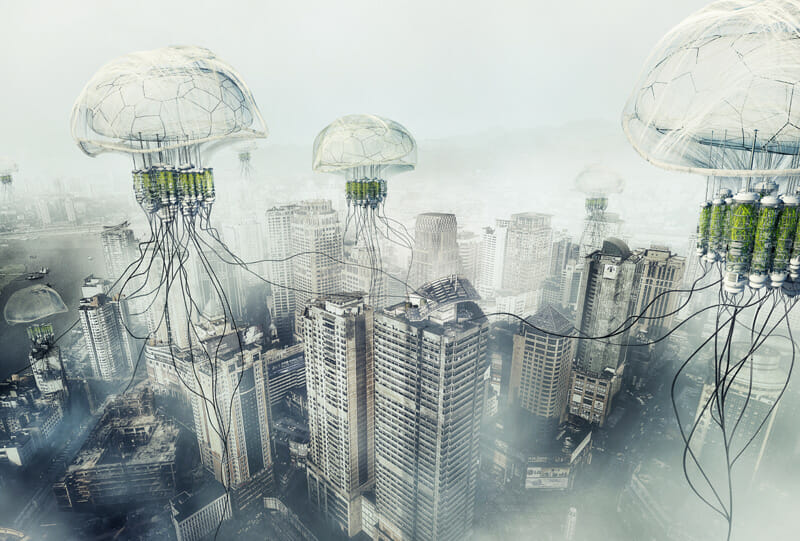 The project aim to use a gentle way to manage Acid Deposition and eventually turn pollutants into available resources (reclaimed water & chemical fertilizer) for the region of Chongqing. 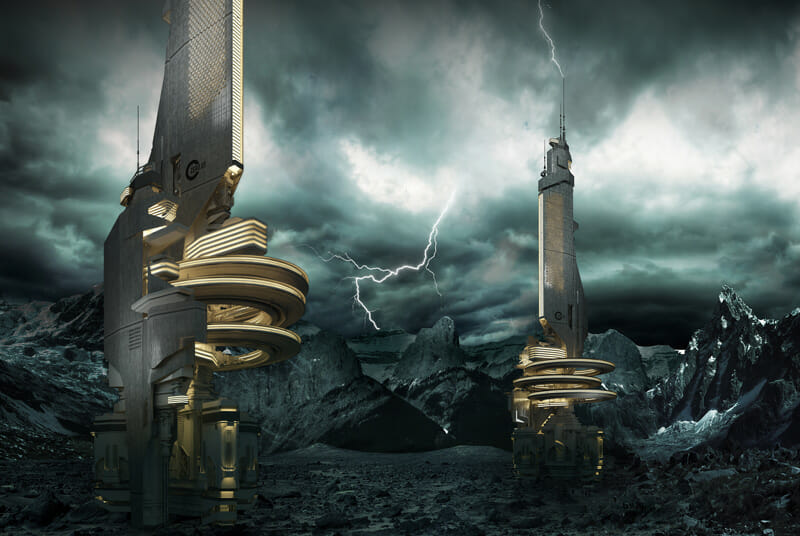 “Zero” is a radical skyscraper, designed to ensure mankind’s survival after global devastation. Like an emergency toolbox, it will be the starting point to the reestablish social order through digital communication and information exchange. 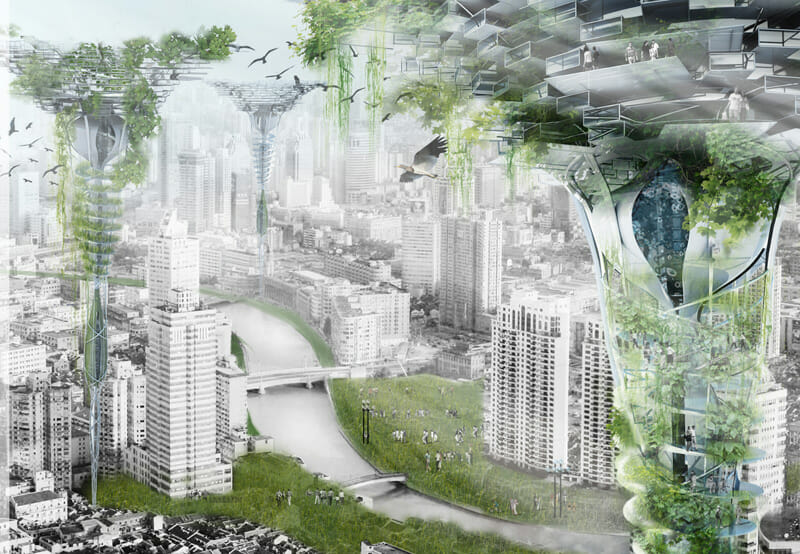 By building towers that can collect and purify rainwater and also purify the water from the river, several advantageous things occur: clean, drinkable water is readily available for the city; rising river levels are mitigated before flooding occurs; and clean water can also be pumped back under ground to fix the sinking subsidence problem the city is experiencing. 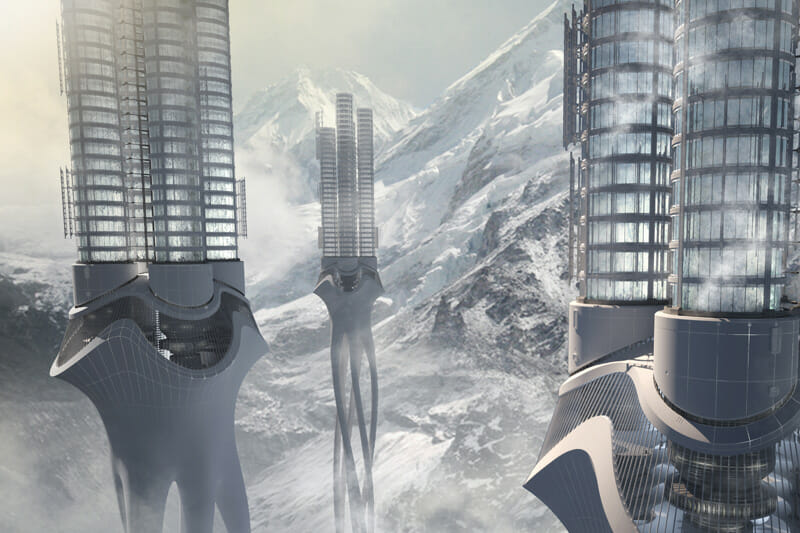 Housed within 55,000 glaciers in the Himalaya Mountains sits 40 percent of the world’s fresh water. The massive ice sheets are melting at a faster-than-ever pace due to climate change, posing possible dire consequences for the continent of Asia and the entire world stand, and especially for the villages and cities that sit on the seven rivers that come are fed from the Himalayas’ runoff as they respond with erratic flooding or drought. 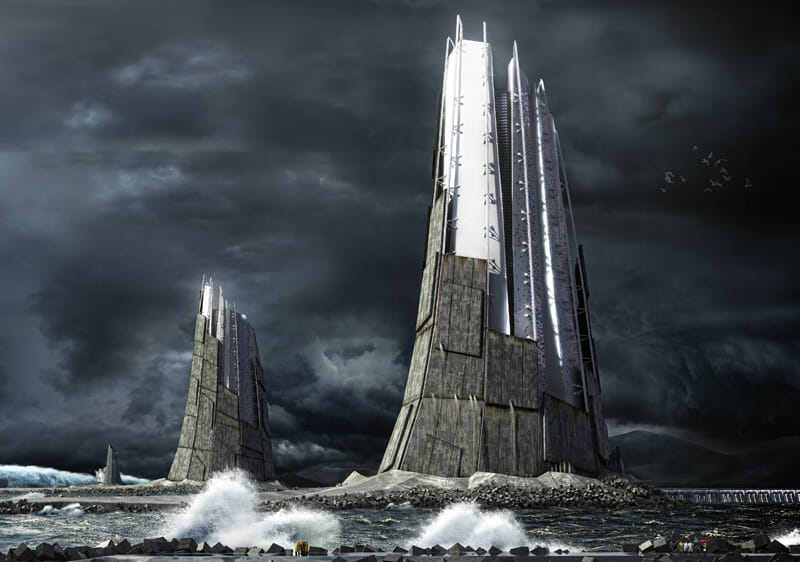 Natural disasters, the threat of technological meltdown and even the possibility of visitors from space all present a need for cities and even countries to reorganize to implement infrastructure that can protect people from possible catastrophes. 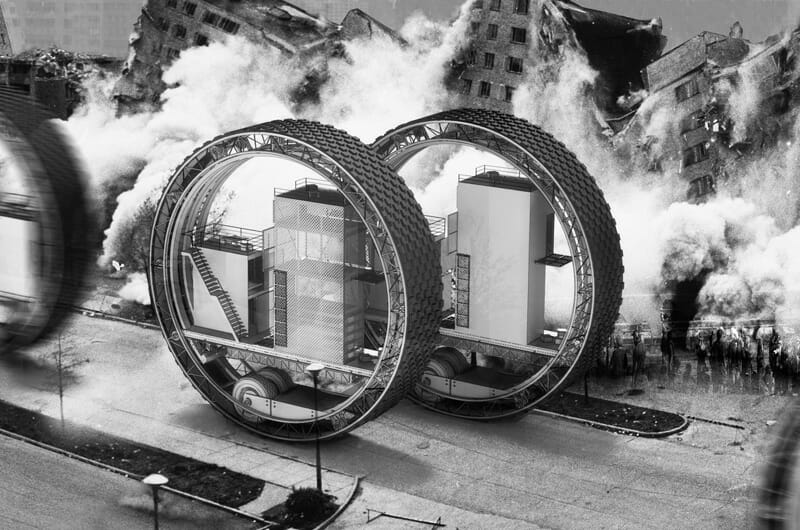 The “Migrant Skyscraper” is literally mobile: A giant, thin tire with a building and green space in the center, this skyscraper is ready to roll. 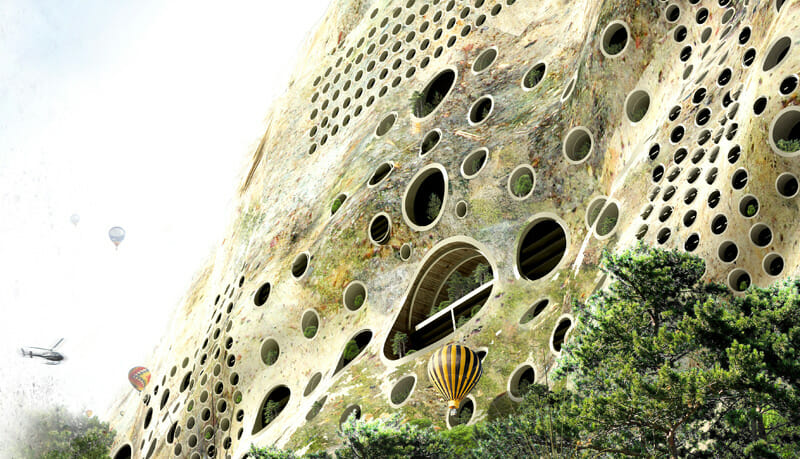 The cities are getting bigger, larger, and higher as the population increases and our connection to natural landscape is disappearing. Urban planners and architects have been trying to recreate nature in cities by drawing parks and planting trees on streets. The implementation of these “green parts” in cities has nothing to do with nature in its original state. 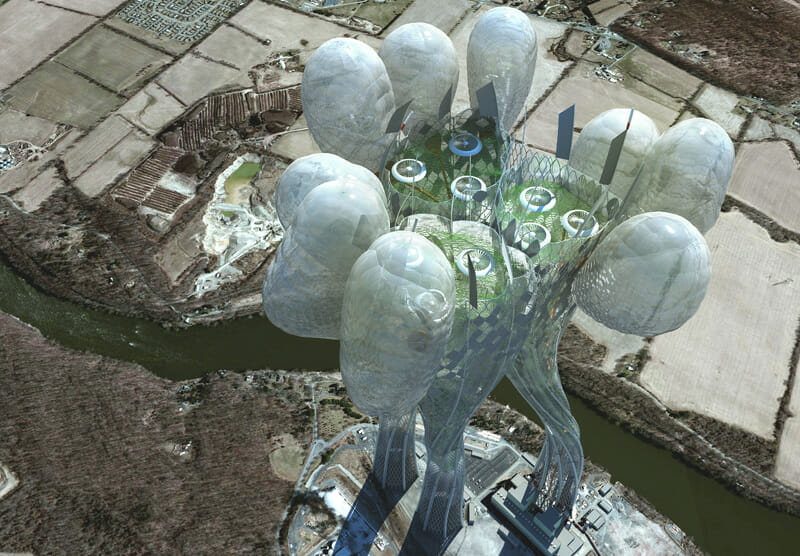 The skyscraper coal cleansers are comprised of three long, tubular legs that join are built around the existing factory’s chimneys and meet high in the air to share a bio-filtering area that also has balloons to capture and hold waste particles. 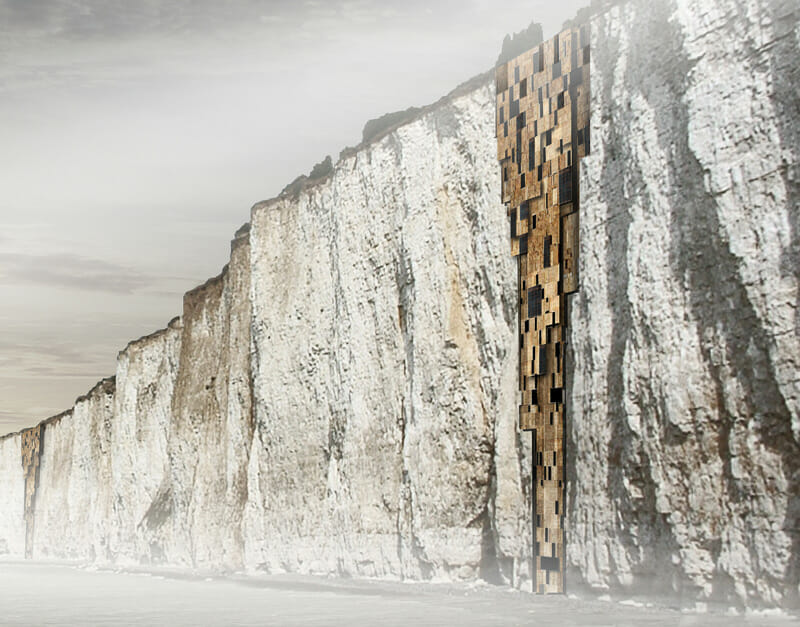 The vertical plane with zero occupancy offers the possibility, with the help of technology, to conquest the apparently inhospitable wall areas in order to preserve the green horizontal plane exclusively for wild life. The cliffs are the new virgin territories to explore.

The “Heaven and Earth” project is a utopia wonderland residing in the air. There are mountains, rivers, lakes, forests, and animals. It solves the problems that exist on Earth, including food, water, and housing. 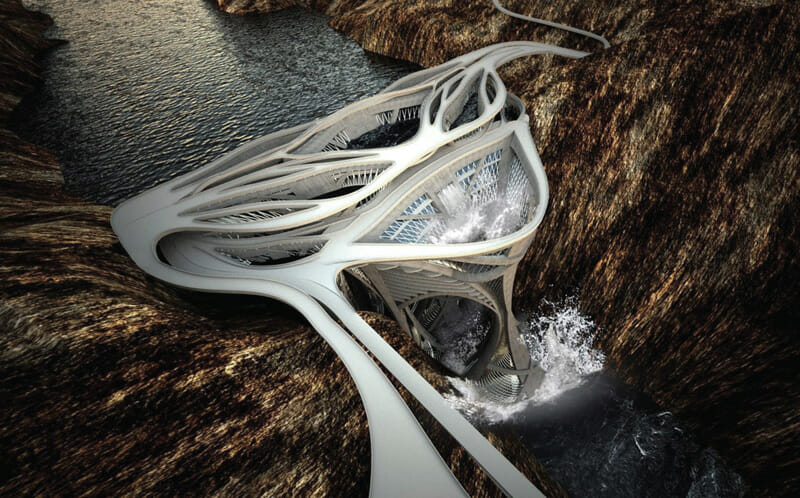 The current public amenities of the world-famous Hoover Dam in the United States consist of a viewing platform, a bridge, and a gallery scattered around the entire site. This project aims to reconfigure these programs by merging them into a single vertical super structure.

Want to see even more entries? No problem at all. Just pop over to Evolo’s competition page and browse. 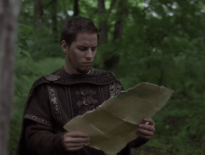 Music The Game of Thrones theme transformed into ska 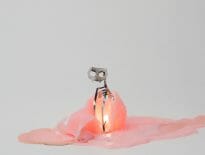 Geek Stuff Firebox brings PyroPets to the UK
wpDiscuzComment Author Info
Manage Cookie Consent
This site uses cookies 🍪, and links are ads that may earn bloggers some money 💰, and with this alert, I very much hope that these dark truths 🧌 are acknowledged.
Manage options Manage services Manage vendors Read more about these purposes
Preferences
{title} {title} {title}
Loading Comments...