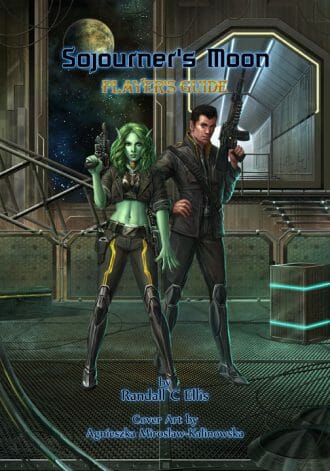 Last year, during Superhero Week, Randall C Ellis wrote about What’s in a super hero character?. We’re pleased to have Randall back this year.

The 2014 challenge – can you adapt a sci-fi game to suit super powers? Guardians of the Galaxy, for example, is that a sci-fi title or a superhero one? Both?

Sojourner’s Moon is a science fiction role playing game. It uses standard polyhedral dice set, and is a tabletop game of missions and explorations placed in the Solipsis Universe. A lot of the Player’s Guide is devoted to the method of creating your Character. In fact, inventing your Character is a labor of fun!

To make a robust Character, a persona able to meet many diverse threats and challenges, it is best to read the book completely before doing the basics. That way you are informed of your myriad choices inherent in creating your unique persona. Choosing a Species is first, and each Species and their Character type is shaped by the Grand Table of Species Harmonics. Choosing a Species will determine the type of Character you may become. The information on the Species also adds background depth, history, and a certain flavor to the game. It can be used to think of ways to personalize your Character.

Yet, the actual potential for power is next, when you roll the Skill Statistic Scores. There are 8 of these scores, and each has a different purpose in the game. For example, if you roll a high score for Personality, one facet of this Skill Statistic is the Diplomacy roll. High scores have high bonuses, and thus give your Character a better chance of having some form of influence in the game, With the Diplomacy roll, one can attempt to lie one’s way out of hostile encounters, convince a port authority guard to let you enter the city, or some other form of co-operative action. The uses are truly up to your imagination. That is a powerful tool to begin with. I suggest, depending on what you want to become, or do, place the highest Skill Statistic scores where your assets are to be focused. The Skill Statistic for Strength will give you a good bonus, if it is a high roll, to Strike and damage in hand held weapons. Even should you choose to become a Mystic, you might use a high Strength for the Knight Profession.

After the Skill Statistic Scores are rolled are the Character Abilities. These are a chosen skill set. You are given so many credits to buy these beginning Abilities, and as you advance in Levels you may buy higher Ability Levels and expertise. This expertise is represented by a percentage chance to complete various actions. For example, if you choose to be a Pilot, able to fly a certain type of space craft, then you have a percentage chance to lift-off, land, and even maneuver in an asteroid field. Some of the other Abilities can be paired to make their impact more effective. For instance, if you pair Martial Arts with the Parry Ability, not only can you attack as a Martial Artist, yet you may also block hand held weapons and other martial arts attacks.

Finally, think of the options of becoming an Assassin or Knight. You may become both, as limited by the Grand Table of Species Harmonics of course, but these options make a much more intense adversary for your Character. Your enemies may think twice before making a negative impression upon a Character that has the power to assassinate with an arc-sword, or even use Poison.

These choices are definitely placed before you in the Sojourner’s Moon RPG. Merely take some forethought before creating your Character, and I am sure you shall greatly enjoy your persona for many planets and moons of exploration.

This superhero-themed post is from 2014’s Superhero Week. Made any good superhero discoveries online recently? Share them in the comments below or teleport to a new superhero article and keep reading. 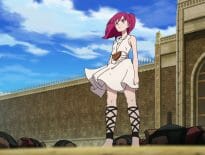 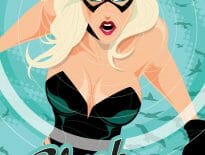