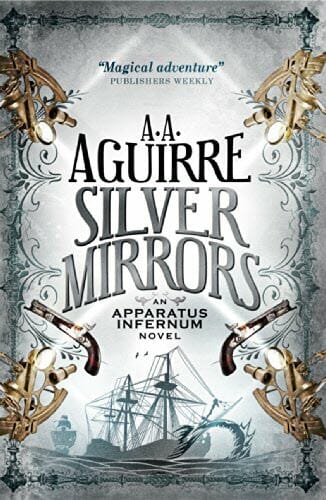 Silver Mirrors is the sequel to A.A. Aguirre’s Bronze Gods. The Apparatus Infernum series blends some steampunk concepts and imagery with fairy concepts and imagery. As a result you have trains powered by elementals that criss-cross a busy city on an island now sealed off by magic.

In the first book our two detectives (a fighter type who acts on instinct and who has fae blood in his veins and a researcher type who is methodical and diplomatic) manage to more-or-less foil the plans of an evil sorcerer building infernal machines and powering them with sacrifice. In Silver Mirrors we pick up with the “or less” part of that summary and deal with it.

If you enjoyed Bronze Gods I think you’ll enjoy Silver Mirrors more. It is a risk; the two Aguirre authors take us out of the city and have the two detectives head off to the Winter lands. This means pirates; steampunk and fairy pirates.

To be honest – I was put off at first. The roleplayer in me wanted the mythos to build. I wanted to learn more about the city, the politics and powers in it. When I discovered Janus Mikani and Celeste Ritsuko were being sent off on a special mission I thought I was going to be miss out. In hindsight this was a silly concern. Of course the new mission would loop back to the earlier book.

Silver Mirror addresses some of the fundamentals of this steampunk-fae magic world. If elemental powers are used to harness some of the steampunk-style technology what happens if they start to object, go wild or otherwise fail to comply with the needs of the science? The Silver Mirrors in question are some of the long range communication methods the island uses and with them taken down by disruptive magics we have our reason why Ritsuko and Mikani need to travel.

It’s a clever set-up by the Aguirres (a husband and wife team) although the ultimate “who’s behind it” is perhaps easy to solve simply because the person you want to blame is responsible. There are some plot twists which could have justified a whole new book and the sort of sub-mission that any scheming GM would be proud of. Most importantly, Silver Mirrors is an easy read. Despite being launched in to the wider world the reader isn’t drowned in detail and despite the carefully controlled depth we still come away with a much greater understanding of the politics, powers and landscapes.

Perhaps the most important success in the book is that the character development continues without spoiling. Book one strongly hinted at the possibility of the two detectives being drawn to one another and all the complications that would bring. Book two manages to keep that tension live without spoiling it. Book two also introduces characters with strong connections to the detectives, past loves, contacts and allies.

I’m left hoping there’s a third book in the works. Sure, we could end here with book two but that wouldn’t be as satisfying as a final wrap-up. After all; after bronze and silver comes gold. Any third book in the series has, I feel, a challenge on its hands. If Silver Mirrors risked exploring out of the city to gain greater depth then the set up for the third book hints at even more serious changes.

My copy of Silver Mirrors was provided for review. Titan Books, £7.99, A.A. Aguirre.

Anime Hunter X Hunter: Phantom Rouge’s English-sub…
💰 Copper Coins 💰 Geek Native is an affiliate and may earn commission on purchases you make from third-party sites.
🍪 Privacy & Cookies 🍪 The site uses cookies to survive. By accessing the site, you agree to use your browser to control cookie use or take 1d4-3 privacy damage (tracking). If you defeat cookies via ad blocking, please consider the Patreon. An intro to cookies, and how to control them, can be found here. I Manage Cookies