You are here: Home / Books / Steampunk Changelings: A review of Bronze Gods 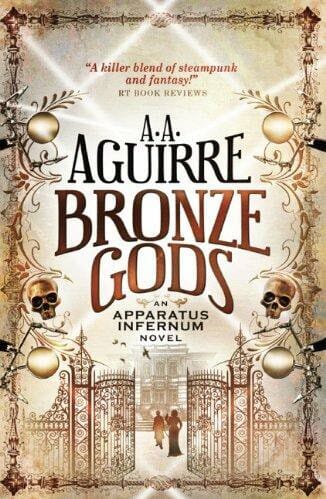 Bronze Gods is an Apparatus Infernum novel, the first I think, from the partnership of Ann Aguirre and husband Andres Aguirre (writing as A.A. Aguirre). It’s an interesting set up that mixes a fairy/fantasy setting with steampunk. The exact mythology and lore isn’t spelt out in painstaking detail, it is hinted at through dreams and research. That’s a nice way to do it, the background builds as the plot unfolds and readers like myself who get hungry for mythos are rewarded with each new development.

There was an island in which pure blooded fae dwelled; Summer and Winter courts. Then, from over the seas, bearded men with their iron weapons came. After the war a peace was formed through the mingling of bloodlines.

The setting of Bronze Gods is a steampunky metropolis ringed by infrequently visited countryside. The fact that some people have low levels of power or even magic seems to be accepted but rarely spoken about. As science continues at a pace it almost feels as if some elements of the past are becoming taboo even though there are no questions on the power or prestige of certain powerful families.

The action picks up with a missing girl and the efforts of Criminal Investigation Division to find her. Inspector Janus Mikani is one of those with fairy in his blood and is perfectly at home in starting a bar brawl in order to win some information for his case. His partner is the first ever female inspector; Celeste Ritsuko and quite a contrast with her attention to detail and logical crime solving.

The investigation takes several turns for the worse. The missing girl is from a powerful family and soon the Criminal Investigation Division has every reason to believe a twisted killer is stalking the streets. This is a killer with access to strange blood magic and intent on completing a powerful ritual.

It’s the escalation of the drama and danger that fuels Bronze Gods. Events unfold in a way that Mikani and Ritsuko are powerless to stop. As murder mysteries go Bronze Gods is complex – not because the plot is complex or trying to guess the killer is complex but because anything is possible in a world with real magic.

I enjoyed the Victoriana in Bronze Gods most of all. Ritsuko has to battle against the prejudices in the force. People are put at risk because of society’s rules and expectations.

The steampunk elements are actually quite low key. There’s rarely any description of the style of technology that would define the genre but we do have tube stations for travel and never-described “mirror stations” for communication. At times I wondered why Mikani and Ritsuko simply didn’t use a mobile phone to call for backup – only to remind myself that there’s no such thing.

Ultimately, if the increasing drama powered the page flicking in Bronze Gods then it was the character development that made it all worthwhile. Mikani and Ritsuko are a great team. Mikani’s a lovable mess of a character. Ritsuko is perhaps less approachable but remarkable given all that she’s chosen to do and achieved. This is a partnership that could easily carry a series of novels and it’s my readiness to read through their next adventure that has earned me as a fan of the Apparatus Infernum novel series at book one rather than anything particularly clever in the plot.

That said; I get the feeling that Bronze Gods is the set up book. This feels like the pilot episode of a new TV show that has plenty of emphasis on the characters and shows what they can do while under tons of pressure. We’re introduced to powerful families, clans, magics and technologies in this book and whereas we don’t dive too deep in to any one of those in Bronze Gods there is the chance (I hope) of that happening in future books.

Overall; recommended. You don’t need to be a fantasy or a steampunk fan to enjoy Bronze Gods. To enjoy this book you just have to be open to a bit of detective mystery.

My copy of the book was provided for review. Bronze Gods, A.A. Aguirre, Titan Books. 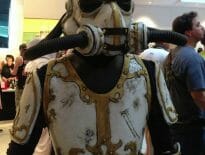 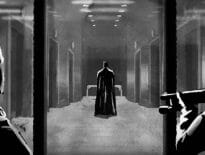