Silver Gryphon games are taking their Ingenium system to Kickstarter and adding a setting. The pitch video describes the setting as Howardian, invoking  Conan the Barbarian and the power of the father of sword and sorcery.

Right now, a draft of Quick Start for Ingenium 2nd is on DriveThru RPG for free and marked down from $25.

The game uses a “Three Word” mechanic to create items, or characters and spells. A freeform “Talent” progression system combines to allow you to play characters without getting lost in stats.

The second edition of the game adds the Eirdia setting which channels Howard as well as Tolkien and Mercedes Lackey’s Valdemar.

The second edition is expected to come in at 200 pages. As noted in the introduction, a draft of the Quick Start rules is available to download for free.

A pledge of $15 gets you access to the PDF of the Kickstarter-only version of the book. The $30 level offers an autographed softcover print of the same book. There’s no mention of extra shipping costs and I hope that doesn’t sting the Silver Gryphon team.

If all goes well, Alyssa Faden will the cartographer for the project and some pledge levels include a 3 foot by 2 foot poster map of the world. Here’s an example of Alyssa’s work.

At the time this post goes live there’s 16 days on the clock and over $2,500 in the kitty. That’s come from just 88 backers. There’s a target of $9,000 to go. It feels to me that gamers should check out the draft rules, for free, and then rather than a “pay what you want” donation at DriveThru that they should pop over to the Kickstarter and make a donation there instead. 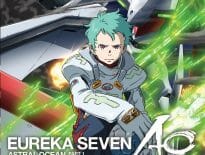 Anime Robots vs aliens: A review of Eureka Seven AO 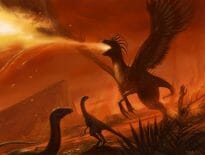