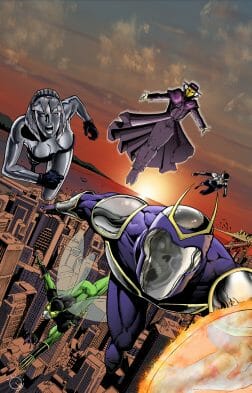 The Kickstarter for Daring Comics RPG has been cancelled. It was only a few pledges short of success.

Anna Lunsford, financial officer for Daring Entertainment, posted a notice on the site to explain the decision. In short; not enough demand.

That’s interest. The kickstarter wasn’t flying; that’s true… but it did get close to passing the finish line. However, what Daring seems to have done is used the Kickstarter as a sample of interest and looked at the forecasts. They’ve decided that even if the project went ahead with $10,000 in funding that there wouldn’t be enough interest in the RPG after that. That means not enough sales of the main RPG or future supplements. I suppose that’s a clever use of Kickstarter but it might make some fans out.

Daring has plenty of product lines already. They didn’t need to take the risk with an RPG line with FATE. It shows just how hard it is for publishers, even those as successful as Daring, to enter the highly competitive marketplace. Anna wrote;

Through careful consideration and continued marketing research Daring Entertainment, LLC. has deemed that our attempts into the FATE market an extremely risky investment. The company’s decision to cancel the investment in the FATE market was strictly based on our standards and commitment to the consumer; instead of creating a sub-par quality product or losing revenue into a market that appears to have few supporters behind Daring Entertainment, LLC., the internal funds initially allocated to the FATE project will be invested in areas in which the existing fan base is strongly requesting.

In no way does the company’s decision make a statement on the interest in the overall FATE system, the decision has been solely based on Daring Entertainment, LLC.’s consumer base.