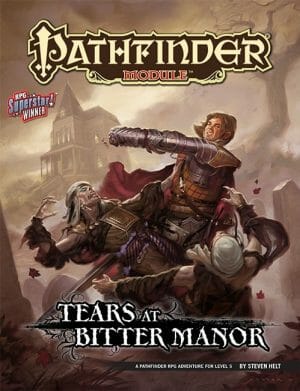 Tears at Bitter Manor at Amazon

Tears at Bitter Manor is a brand new adventure from Paizo for Pathfinder. The 64-paged book includes a two-sided, full-colour poster map and suits a group of 5th-level characters.

The adventure module is written by Paizo’s in-house team and Steven Helt. Helt won Paizo’s RPG Superstar winner of 2013 and this means that this adventure was selected ahead of fierce competition from many expert GMs. Geek Native is lucky enough to be able to offer up an interview with Steven Helt. I asked him about winning, how the official adventure might differ from the award entry and for tips running the game.

How does it feel to see Tears at Bitter Manor in print? What are your expectations for what happens next?

When I saw the finished product for the first time, it was the .pdf on my laptop. I went immediately to the illustrations because I’d hear there was some creepy, ferocious art. I am so impressed with the cover and the interior art, and it feels so amazing to just see my name on the cover. I have always liked tinkering with design, and getting a head start on my freelance and design career is so exciting!

I go to Gen Con every year to compete in Iron GM and try to meet more publishers and designers. I have so much to learn from so many people, but I love design and want to break into world building. To that end, I gathered some talented friends to tackle fun design projects. We’re called the Four Horsemen (I’m Famine), and working with them has been incredible. Good design should be fun, but also serious work. We force ourselves to design stuff we haven’t seen before, or a take on gamer favorites that we think will really bring players into a game. I could not be working with those guys if not for the Superstar competition and the grace of Paizo and Pathfinder fans.

How much effort and time did you put into winning Paizo’s RPG Superstar in 2013?

The interesting thing about this question is that the truth is oxymoronic. I spent less time than I wanted on each entry, because every round I advanced in the contest, the rules twists or other factors forced me to abandon my first ideas. Now I’ll get to hammer those ideas into place and make them better. I also fell miserably ill when writing the fourth round, and wrote the final round pitch on a plane for India. I did work very hard on that round. Every day we’d visit churches, drop by an orphanage, and then back at the hotel I’d write until the wee hours, correcting clunky sentences and trying to make the story and proposed encounters mesh well together.

So I definitely worked hard every single round, but the actual entries were always an idea I had that was more suitable than the first monsters or archetypes or encounters.

How does that compare to the time and effort you’ve put into the official Tears at Bitter Manor Pathfinder Module?

Oh, goodness. I remember the day the results were announced, I was such an eager fanboy. I sent an email straight to James Jacobs reporting for duty and he said “we’ll give you plenty of time, enjoy your win and get some rest.” And I couldn’t stop thinking about the adventure and how I wanted to change things up and how with my job (commission sales) I have to get an early start so I don’t get stressed out. When I got my initial instructions, I went straight to work every day.

It was my first full adventure for any game company, so it was definitely a learning experience and I definitely worked as hard as I could to deliver the adventure. I have learned so much from Paizo and other publishers since then…that has been nonstop since I turned the file over.

Your winning adventure proposal The Golden Watch is still online for GMs to use and be inspired by. How much extra does the official Tears at Bitter Manor add?

The final version of the adventure keeps very faithfully to the tone and the story. But you want players who follow the contest to be surprised, so there are definitely different takes on some of the highlights of the contest pitch. I would say to players, don’t count on anything you read in the pitch to save you!

What are the top three tips you would offer to any GM looking to get the most from the module while running it smoothly?

First, prepare voices and gestures for the main NPCs. This module tells an emotional story and you want to immerse your players with great portrayals of the NPCs. At the same time, you have to remember the NPCs are there to motivate the players. It’s a fine line, developing NPCs that add texture to the game without overshadowing the players’ ability to dominate the roleplay.

Second learn the movements of the creatures and NPCs. The denizens of Bitter Manor know about one another, and have no interest in taking on six heroes by themselves if they don’t have to. This is a dangerous adventure, but even more so if the PCs don’t tread carefully. You have to know whether some bad guys come downstairs to investigate that shout spell, or whether too many responders too quickly just creates an impossible encounter.

Third, Bitter Manor is a very dark, emotional adventure. Try to make sure you set the tone of horror, betrayal, and hopelessness. The encounters are tough, and players who don’t want to spend much time roleplaying will still enjoy it. But the text is rich in drama and maintaining that atmosphere will really allow the plot to shine.

For a bonus round of advice, there are some tricky moments where PCs might be in a chase scene or in a combat where they have to react quickly and cohesively. Keep the tension high in those moments and let everyone feel the danger.

Are there any extra ideas for Tears at Bitter Manor that were unfortunately cut due to space concerns that you can share here?

Actually, not really. The encounters I planned largely share a theme of hopelessness or loss or horror, so they mesh well as interwoven stories. If an encounter had really no tie to the plot, the principle bad guys, or the contest, I didn’t entertain it very long.

I’d say if there were ideas I considered that didn’t make it in the final version, it was because this year Paizo expanded the adventure to 64 pages of content, including monsters and magic items from previous round of the 2013 contest. I know one item in particular I loved and was jonesing to use, and just couldn’t do it without bending the plot in an uncomfortable way. So I am going to pitch Paizo a new adventure where that awesome wondrous item becomes prominent very early.

To conclude, I am so grateful for the opportunity that is RPG Superstar. I am learning with every project I am fortunate enough to be asked to write. I hope every reader buys a copy of the adventure and I hope people flood my Facebook page with stories of combat and tragic character deaths! Thanks to Paizo and to the wonderful fans at paizo.com! 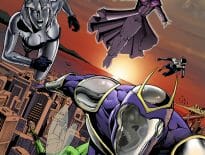 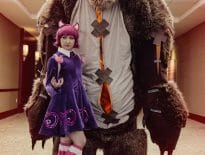