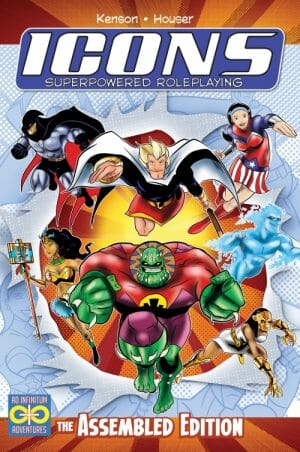 A new edition of the superheroes RPG Icons is on the way and via a partnership between Green Ronin and Ad Infinitum Adventures. Steve Kenson, who created Icons, will write and Dan Houser and Daniel Solis will provide the art.

The Assembled Edition of Icons will be brought up to date with everything that’s happened since the original publication. This means updates from the Great Power Kickstarter, supplemental rules from Villainomicon and Team-Up and all in a hardcover.

There is a little wriggle. Steve Kenson is a staff writer for Green Ronin. At least; he writes for some of their in-house superhero RPG Mutants & Masterminds. Icons began life as a personal project and first saw print via a deal with Adamant Entertainment.

With this deal, Green Ronin boss Chris Pramas has essentially greenlit a superhero RPG project from his own superhero RPG designer. The ins-and-outs of Icons’ path are detailed by Kenson in a blog post on Green Ronin.

Icons is one of the most popular, highly rated, superhero RPGs from Geek Native’s 2013 Superhero Week RPG head-to-head.

Music The Dragon’s Daughter: Game of Thrones tribu…
💰 Copper Coins 💰 Geek Native is an affiliate and may earn commission on purchases you make from third-party sites.
🍪 Privacy & Cookies 🍪 The site uses cookies to survive. By accessing the site, you agree to use your browser to control cookie use or take 1d4-3 privacy damage (tracking). If you defeat cookies via ad blocking, please consider the Patreon. An intro to cookies, and how to control them, can be found here. I Manage Cookies