You are here: Home / Games / Tabletop & RPGs / All Things to All People: A Review of The Tomb of Caragthax 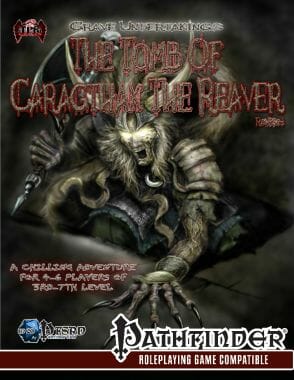 Grave Undertakings: The Tomb of Caragthax on RPGNow

I must confess before I start this review – I’m not big on dungeon crawls or relentless monster-bashing. I’m not adverse to conflict-based encounters, but I don’t dwell on them.

On the other hand, I have another confession – I really like to read material that has the flexibility and potential to reuse and mine for other games. If I can scavenge something intended for one genre and seamlessly apply it to another, brilliant. I have had that experience in the past with Astrozombies Must Die!, which while written as a sci-fi pulp adventure for Bulldogs!, it worked brilliantly as a relatively light-hearted fantasy quest.

In reading Grave Undertakings: The Tomb of Caragthax [Revised], I found myself struggling to appreciate the set piece dungeon-grinding, while enthralled by the setup’s potential for use in other games. It felt odd, to say the very least, to find myself so torn…

You can pick up the 43-page adventure as either a PDF or a black-and-white soft cover. The book contains a scattering of illustrations of encounter creatures and a couple of very nice maps. The award for best bit of art in the book invariably goes to the cover, which depicts the titular Caragthax the Reaver, in all his undead glory.

The adventure follows a clear and very readable two-column format with a grey background. It might pose a few problems if printed.

Features
Grave Undertakings: The Tomb of Caragthax the Reaver presents an unapologetic old school dungeon that rates bloodshed, pain and a sound beating over commonsense and logic. The adventure unequivocally sets out a challenge, certain to have any party of characters scrambling for their healing kits and contingency plans.

For reference, the following sections contain certain references to the adventure plot that players should avoid – though nothing so revelatory that they’ll survive without a world of pain!

The adventure starts out with a brief introduction to the history behind the supplement – a revisit to an old favourite originally published when TPK didn’t have the publishing chops to necessarily put out something refined and polished. I like that – because it shows that a small concern can grow and acknowledge early shortcomings in capability.

Following this introduction, the Background explains the general situation around Caragthax. A master of evil men and a savage warrior, he fell foul of his underlings, who in turn fell foul of their canny master and his nefarious priests. Indeed, in this revised version of the plot, the priests themselves got the last laugh, adding in their own layer of deception, by entering into a diabolical pact with nether powers.

Hooks offer up three options – a missing girl, a curious sinkhole, and the lure of legend – but none really shout hard enough for a sensible band of adventurers to get involved. The cairn over the tomb of the ghastly warlord bears stones engraved with Abyssal runes that do not bode well… so, why would anyone consider the risk worthwhile? Even those of lawful or good alignments must have some commonsense…

Overall, the adventure splits out into two areas. The original adventure encompasses the tomb of Caragthax and really provides a focussed, extended encounter – suited to a convention demo or one shot. The revised adventure dumps the adventurers able to defeat the initial threat into a fresh crisis and a lengthy dungeon crawl to put an end to the spirit of Caragthax and the machinations of his high priests.

Presentation-wise, each area provides a read out loud section, any notes worthy of immediate attention by the GM, details discoverable through lore by player characters, actual area descriptions, and then the threats – with full stats presented, along with special abilities, tactics, and adjustments for a greater Threat level. I’d call the content solid and robust on a level intended to support a GM, especially one running the adventure with little preparation or as a convention game. You don’t want to feel unprepared in situations when you have half a dozen eager convention attendees panting in barely contained anticipation, d20s clutched in their white-knuckled fists.

From the perspective of a dungeon-lover, the tomb provides a considerable challenge, filled with robust potential. The tomb contains many angry, tortured or Geas-bound adversaries, often in very defensible and well-secured conditions. Each room will demand a great deal of all party members, requiring them to manage their powers and resources carefully, and seek any moments of respite whenever practical. If you have a group who enjoy a bloodbath encounter with the forces of evil, this adventure serves up a solid portion of the very same with lots of interesting variations on standard creatures and – as I mentioned – carefully defined options for increasing threat levels if required.

However, from a logical point of view, the tomb has some questionable components – none more troubling than the decision by the High Priests to take the one weapon capable of killing Caragthax once and for all and putting it into one of the rooms near his final resting place. Yes, they shattered the blade and stored the fragments in a destructive energy cloud… but, they also put the pommel in a room with the magical forge capable of instantaneously restoring the blade to full function. I understand the desire to offer a means to reduce the challenge to those willing to go the extra mile to retrieve it – but it defeats the point of a fiendish deathtrap-strewn dungeon to place a powerful and valuable artefact in plain sight just before the climax.

The tomb has a strong Indiana Jones-style tomb raid feel, except with the violence level turned up to eleven. The complexity combat situations and traps serve challenge – but, outside of adventure and excitement, they don’t necessarily make a lot of sense.

Now, I mentioned that I like to reuse material from supplements and adventure – and here The Tomb of Caragthax did give me pause. I like many of the ideas. The henge-crowned cairn with a sinkhole entrance to the tomb below appealed to me. I can envisage using this to involve the characters to save a colleague – an immediate need to get involved. If a curious member of the party falls in and happens to carry something important – what choice to everyone else have but to go to her rescue… especially as when they call down, no response returns from their beleaguered colleague.

Final Thoughts
So, what can I say? I’m torn.

I love the fact that TPK have returned to a firm favourite of their existing customers and given it an overhaul. Like I say, the cover looks great, the content appears solid, and I noticed only a couple of slips in spelling.

For anyone who plays hardcore dungeon adventures all the time, The Tomb of Caragthax provides solid prospect. If you play Pathfinder, you have the additional advantage that The Tomb has all the stats to hand with CR variations all covered. If you play some other game, each adversary has explanations of their abilities and an overview of their attitude and tactics.

If you prefer your gaming more cerebral or want to explore dungeons that make more sense, The Tomb of Caragthax still may have something to offer if you’re open to mining it for ideas. As I say, I can see a bunch of material and hooks I’d readily use in other games and settings. I have a folder in the Cloud specifically set aside for this sort of ready material, for those game sessions where I need something quick to riff off. The Tomb will be amongst those files.

All Things to All People: A Review of The Tomb of Caragthax 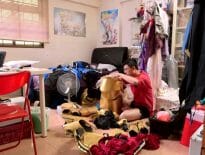 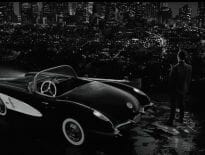