You are here: Home / Games / Tabletop & RPGs / In the Best Possible Taste: Numenera’s Love and Sex in the Ninth World 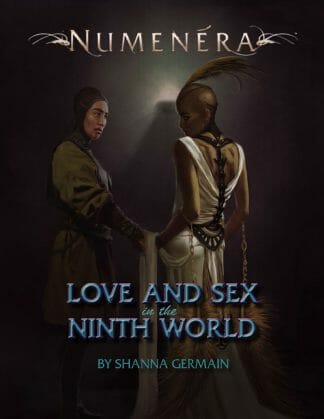 Love and Sex in the Ninth World on RPGNow

There’s something you can definitely say about Numenera – and that’s if you’re not thinking outside the box, you’re probably not playing to it’s full potential. When you’re taking the world to the brink of destruction, a billion years into the future, you can’t just think some post-apocalyptic Mad Max knock-off.

The Ninth World isn’t somewhere on the wrong side of tomorrow… it’s been around the block a few times and come back with a bunch of friends you can’t describe as organic, never mind human. The setting embraces the alien and something beyond the unknown, but at the same time holds a mystery or two in full view like who rejuvenated the Sun and how come after all this time some form of recognisable humanity has emerged once more to prominence.

After supplements on technology and the beautifully illustrated Ninth World Bestiary (which I’ll cover in a forthcoming review), Shanna Germain has plumbed another mysterious world not often seen at the tabletop – the business of love and sex.

Form
Love and Sex in the Ninth World is a 13 page PDF supplement for Numenera, written by Shanna Germain, and published by Monte Cook Games. The supplement has the same essential format as all the other official releases in the Numenera range and a scattering of interesting artwork. The supplement breaks the content down into several short chapters covering key subjects with various asides, marginalia notes and page references to the core book, generally where mentioning locations or creatures of the Ninth World.

Features
I suspect it’s a positive sign when you’re reading something and you already have ideas popping in your head about introducing new things into a game right from the get go. I didn’t even make it off the first page before my mind started rushing ahead of me. Shanna writes, ‘Every region, kingdom, island, or aldeia might have its own customs, rituals, and numenera‘, in respect of sex, love, lust and courtship… and off my mind went into the implications of numenera in the whole business of tradition and intimacy.

As mentioned, the supplement breaks down into several short chapters. The Introduction firstly considers gender, sexual orientation, sex, and relationships in the Ninth World. As the core book suggests casting off your expectations and modern associations in an attempt to communicate the alien nature of the setting, the same applies in respect of sex and love. This is not a world bound by the same mores and taboos as our own modern society. The Ninth World does not present the same stark divisions between specific genders, whether amongst humans or visitants, or any of those species that lie somewhere in between. The discussion in the chapter offers various seeds and suggestions, suitable for peppering your own adventures, as well as various specifics about the attitudes and customs of people and places in the Steadfast.

Putting Sex in Your Game: A Guide for GMs and The Hard Stuff: Sex Tips for GMs rightly considers the considerations and boundaries you should ponder and talk through with your group before venturing forth with matters of love and intimacy in your game. The supplement deals with the whole spectrum of sexuality, from the consensual to the forced, with respect and thoughtfulness – and you need to do the same. Sex and love in a roleplaying game may not suit every group or, more specifically, every individual, and these pages consider this with a range of guidelines and suggestions. Once you venture down this road, you need to be open to feedback and mindful of player reactions, engaging in discussion before and after sessions,. where appropriate, to keep things entertaining and never cross the line into causing offence.

The short chapters Love and Sex gives more focussed thought to the customs associated with each in various parts and strata of the Ninth World, including courtship, ceremonies, prostitution, health, and pregnancy. Shanna offers various interesting ideas, particular the concept of Daupsums – individuals prepared to trade sex in return for numenera artifacts. Your characters next visit to a clave may present something a little more colourful and surprising than a fusty gathered of cloistered monks…

Finally, the supplement rounds out with two pages of Numenera, including three artifacts, five cyphers, and eight oddities. The final section notes that the very nature of oddities and their often inexplicable purpose might lend them to use in sensual scenarios quite often. The ‘Firm bit of rubber that adheres perfectly to someone’s finger, making it twice as long‘ means I’ll never look at Futurama‘s Professor Farnsworth’s Fing-longer in the same light ever again!

Final Thoughts
I’m impressed by the care and consideration Shanna has given the subject matter. It is, as she herself notes, a very normal part of our real lives that gets short shrift, if any attention at all, in the course of most games. However, despite that little attention, there’s no reason to ignore it, as in a world teetering on the edge of the abyss, every hope, love, or grain of sexually inspired happiness might make all the difference.

Indeed, the text offers the suggestion that just as other positive emotions might offer a boon in certain actions, sex or love might do the same, driving a character to greater acts of aggression or defence in respect of an intimate or beloved partner.

When I first heard about this supplement on the author’s Google+ stream, I didn’t quite know what to make of it or what to expect. I’m very pleased to say, I’m greatly impressed and, in light of the recent release of the also excellent Ninth World Bestiary, have very high hopes for the future of Numenera.

My copy was provided for review. Love and Sex in the Ninth World, Shanna Germain, Monte Cook Games, $2.99 in PDF.

Meanwhile in Germany…
The German Roleplaying game “The Dark Eye” (Das schwarze Auge) has also a Sourcebook for Love, Sex and all around it.
But its not a measly 13 pages, instead it has 240.

In the Best Possible Taste: Numenera’s Love and Sex in the Ninth World 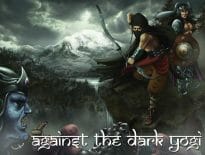 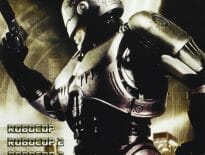