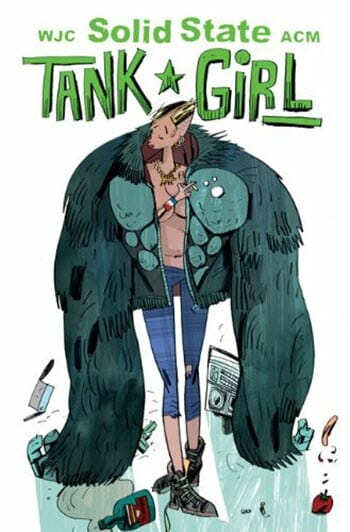 This is not my favourite Tank Girl of all time. I didn’t come to grips with the art and I found the story too fantastical. Sure, Tank Girl stories are often on the fantastic side of zany but I can always pick up on that touch of survivalism in the post-apocalyptic world. Tank Girl is the wacky contrast in the face of death; that’s what makes her TG.

That said; I sat down and read the hardback graphic novel in one sitting. At no time did I think; “This is rubbish. I’ll read something else”. I read it but never got fully into my Tank Girl appreciation zone.

Alan C Martin and Warwick Johnson-Cadwell’s Solid State picks up when Tank Girl and Booga go to get their ham radio fixed. It had ham in it. One thing leads to another and we’re on an Innerspace adventure inside Booga.

If you’re not familiar with the Dennis Quid and Meg Ryan movie from the 80s, Innerspace is an adventure in which a hypochondriac finds himself injected with a miniaturised fighter pilot in a miniaturised spaceship/body ship.

In Solid State, Tank Girl and friends end up on a similar adventure. Unlike the family friendly Innerspace, Solid State has a gang of villains summoned; including Anti-Tank Girl. There’s lots of swearing too and that’s just as well.

The art style ensures that the adventures are surreal. Perhaps I’m too set in my ways but I didn’t take to squished turnip head Tank Girl. At times the whole thing felt like a dream sequence and maybe it was. It was certainly a tour of TG’s psyche.

There are twists and turns aplenty in Solid State. It channels core Tank Girl in that respect. In fact, that’ll be why I happily kept on reading despite the graphic novel not quite reaching me in the way I had hoped. I did want to see what happened next. I was looking forward to a typical Tank Girl style move that saved the day and exhibited punky defiance.

There’s a short story tucked in the end which I enjoyed. Called “Make Them all Die” it’s another with turnip head Tank Girl and while we’re dealing with zany zombies it feels more familiar.

I think Tank Girl fans should give Solid State a go. I suspect it’ll be Marmite. Some will love. Some will hate. I’ve already had one debate with a TG fan friend who recommends the book. My honest review is that while this follows on in the Tank Girl line it doesn’t reach the heights the best of the series has to offer.

Art Disney Princesses transformed into World of Warcra…
💰 Copper Coins 💰 Geek Native is an affiliate and may earn commission on purchases you make from third-party sites.
🍪 Privacy & Cookies 🍪 The site uses cookies to survive. By accessing the site, you agree to use your browser to control cookie use or take 1d4-3 privacy damage (tracking). If you defeat cookies via ad blocking, please consider the Patreon. An intro to cookies, and how to control them, can be found here. I Manage Cookies