The Fall of Man is a Kickstarter from Samurai Sheepdog. It promises an RPG of post apocalyptic horror and survival.

There are some social media stretch goals too. In other words if the Fall of Man Facebook page gets 250 likes then $5+ cash backers get a free sourcebook. There’s another unlock at 400 Facebook likes.

There’s some names gamers might recognise attached to the project. Richard Lee Byers is one, he’s a horror and fantasy author who’s written for Forgotten Realms and other RPG settings. Ed Greenwood, who created Forgotten Realms, is another. Greenwood has more than 200 books to his name nd millions of sales. Then there’s the Doug Herring and Hal Greenberg combination; two creators who once worked together as Mystic Eye Games and were interviewed by GameWyrd. There’s also Ken Shannon who, along with Greenwood and Herring, get first mention in the author credits in the Kickstarter video.

Stepping up to the project now is Jim Butler. Butler’s an ex-TSR editor and designer and founded Bastion Press. An old interview with Butler also lives in Geek Native’s GameWyrd archives. Since then he’s gone on to work at Turbine in marketing and is now at Trion Worlds in a global marketing role. Fall of Man may be Butler’s “return” to tabletop RPGs but he’s built up some serious marketing clout in the meantime. RIFT, Trion’s first title, had a multi-million dollar campaign.

It’s interesting to note that Fall of Man isn’t the first time we’ve seen Gothos. Deep in Geek Native’s archives there’s a copy of a 2002 review of The Hunt: Rise of Evil from Mystic Eye Games. This isn’t hidden. The Kickstarter makes frequent mentions of the old game. 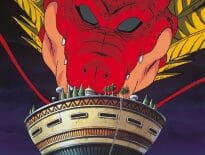