You are here: Home / Games / Tabletop & RPGs / Things That Go Fhtägn in the Night: A Review of Cultists Under The Bed, for The Laundry RPG 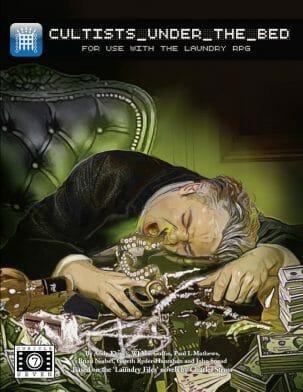 The Special Operations Executive (SOE) was formed during World War II as a secret unit engaged in combating certain enemies and forces intent on activities esoteric and occult. With Hitler’s Abwehr-SS hell-bent on the use of malevolent and otherworldly weapons to change the course of the war, Britain needed a counter-force. It was vital the SOE could handle itself in all matters mystical – though these arcane forces had more to do with unfathomable extradimensional and alien concepts and technologies than anything hocus-pocus. In the here and now, with the SOE long relegated to protected archives, the organisation remains a part of the bureaucratic engine of modern British government, as The Laundry.

But what occult forces or threats exist to justify such a drain on the taxpayer, that might be better spent on staggeringly long term commuter train projects or investigation into how efforts to boost Britain’s coastal fish stocks might affect minority groups in south Wales? You might well ask…

Form
The Laundry: Cultists Under The Bed is a 129-page PDF (and I daresay a slightly longer physical book) written by Andy Klosky, WJ MacGuffin, Paul L Mathews, Brian Nisbet, Gareth Ryder-Hanrahan and John Snead, and published by Cubicle 7.

This dense and informative volume follows the same format as the rest of the series, primarily formatted as two columns of text with sidebars and photos inserted as if taped in an official file. The whole book follows that same theme, and page background, as of a folder extracted from The Laundry’s secured Stacks.

The book contains a liberal scattering of greyscale artwork and a colour cover, picturing some misguided individual overcome by tentacly horror, unlikely to be good for the sinuses.

Features
Cultists Under The Bed’s first section handles the basic business of cults and similar esoteric organisations. It considers size, structure and motivations, from the accretion of benign, but mad, individuals for a common, if obtuse, purpose, to heaving multinational incorporated churches of some new faith promising eternal life and forgiveness for 36 affordable monthly payments of $199.99. It considers recruitment methodology, ranging from coffee mornings to hijacking, funding the apocalyptic end of all creation, and acquisition of influence through fair means and foul.

The following section focuses on the way The Laundry monitor and manage cult activity using the handy (but currently under review) acronym SIDE – Surveillance, Infiltration, Defamation and Elimination. Each headed sub-section considers these four levels in detail in respect of the approaches, methods, personnel, and hardware that The Laundry employ, deploy and counter-ploy. After discussing the purposes and measures associated with each phase, the chapter rounds out with a couple of sample investigations and a table for generated Cult Plots.

The passing reference to past investigations, as with a lot of material here, makes for interesting window dressing. CASE MOUTHY INTERLOPER refers to The Laundry’s intervention into a cult of Y’Golonac that espoused mutilation as a path to perfection – and it might be quite interesting to see one of the deprogrammed cult members working in some menial role around Capital Laundry Services. The ex-cultists obvious deformity might draw interest from newcomers and the seconded, leading to discoveries in the Archives about the raid of 1968. Maybe other raids, the same year, around the UK also raided the (relatively) benign front operations of the cult – what happened there? Were they as successful? Does the cult survive?

A little over twenty pages into the book, we then home in on the meat of the subject matter – the cults themselves. The supplement describes eight different cults in detail:

Each section considers the history, structure, membership and key individual – whether significant, unusual, extreme or simply representative. The information on individuals includes a picture, brief personal history, statistics, skills and weapons – mundane or otherwise. Some individuals include one or more humorous skills to brighten your read – like Medicine (unnecessary) or Perform (PowerPoint presentation) – but this varies wildly by section, symptomatic of having a different writer preparing the content for each section. As a fan of humorous and tics from working on Paranoia, I appreciate a light touch in a game that should have a sense of humour – and more serious Call of Cthulhu adventures have set a precedent by often dabbling in esoterically named.

Rather than going through each of the cults covered in details, I’ll take the Esoteric Order of Dagon as an example of the spit and spin you receive in purchasing this august tome, then cover the remainder in brief.

(If I listed them all, you might think you don’t have to indulge in your own purchase! The knowledge of the ages does not come from anything less than the dry-elbowed dredging of dusty and esoteric tomes, or at least a triplicate submission of an A6771/C Temporary Archival Restricted Stacks Requisition docket)

The Benthic Treaty set clear lines in the sand about the relationship between the Deep One and humanity, so how does The Esoteric Order of Dagon get by when they’re cut off from their one-time masters? When the loves gone and the Deep Ones stop answering your calls, what else is there?

Nothing, basically. The flabby jowled and po-faced worshippers of the hideous and submerged find themselves bereft of support, stripped of resource, and beached like bewildered kraken. The Order spend as much time engaged in petty crime and piratical shenanigans in pursuit of wealth to fund the dispersed and dislocated cult as in the worship of the deeps. Unfortunately for agents of the Laundry, the Esoteric Order is no longer just one cult – “it’s a mixed seafood platter of evil” (a fine line quoted directly from the book itself!).

The sections include (as appropriate) key assets, spells, grimoire, artefacts, notable non-magical gear, and operations likely to engage the interest of The Laundry (very much in the vein of plot hooks and adventure seeds, either forming whole missions, passing responsibilities, or memorable post-implementation review addenda in internal minutes and memos).

The Lodge of Dagon have taken the principles of the Esoteric Order and turned it into a elitist and ofttimes fashionable gentleman’s club, offering unreserved reverence of the divine perfection of the Deep Ones, coveting the treasures certain to lie in the depths, and basically looking down their nose on everyone, for one or more shortcomings.

The Starry Wisdom Cult seeks singularity through the creation and adaptation of ultra-bleeding-edge alien technologies. The cult, headed by a coterie of multi-billionaires, doggedly hoards the Shining Trapezohedron, an ancient artefact akin to the One Ring in it’s ability to slip out of possession, only to resurface in the hands of others more likely to fall for it’s seductive charms and promise of power.

The Handmaids of Ulthar present a not-quite-benign, yet not-seriously-a-threat clowder of well-to-do cat ladies who serve the cause of Bast and her feline familiars. The Handmaids have plans and their ire can be unpleasant and disquieting to witness, but they’re unlikely to tip the balance in the advance toward CASE NIGHTMARE GREEN (that’s the end of the world, for anyone not familiar with The Laundry game or books).

(Odd proofreading anomaly – entire section headed The Handmaids OR Ulthar, not OF)

The Red Skull, on the other hand, present a significant, widespread and aggressively led threat against humanity. The Skulls glorify and glory in pain, both the infliction and the suffering, with far greater respect for the latter. The cult has the know-how to harness pain to power their rituals and sorcery, and it’s only a matter of time before their efforts bring something unpleasant to Earth.

The New Model Army believes in the resurrection of the Lord Protector, Oliver Cromwell, and the ascendency of England into a bright new age. The solid facts behind this grand plan, however, don’t necessarily stand up to close scrutiny, but you might not have time to consider this on the field of re-enacted battle with a ‘foam’ longsword embedded in your chest cavity…

The Fraternity of Nagalu, founded at the close of the 18th century, is a small, well-funded and worrisome group of swingers and snake-worshippers, intent on finding and reviving the snake god Nagula. However, reality and information in The Laundry Stacks on the subject differ sufficiently that the Fraternity might prove a very real problem if not more closely monitored. They possess a trove of artefacts sufficient to make The Laundry and the Black Chamber alike green with envy…

Founded by the 15th century inquisitor and witchfinder Heinrich Kramer, The Sodality of St Benedict masquerades as a clean-up crew for sites laden with paraphernalia of the satanic and occult variety. The esoteric acquisitions in the hands of the Sodality, in turn, find use in the ongoing fight to deprive other ne’er-do-wells of their mystical and transmundane artefacts. All very benevolent and commendable, right? Nothing to worry about here… move along.

The cult information is particularly interesting because you get a file cover sheet synopsis, following by an overview, then some actual history, backed up with beliefs, organisation, and assets. Each layer of information doesn’t necessarily overlay neatly, if at all, with the truth, or rumour, directly beneath. In some cases, like the Handmaids of Ulthar, the absolute truth falls to the Keeper to decide.

While the Esoteric Order and the Lodge have similar roots, each cult described has sufficiently different purpose, methods, backers, ploys, and plans to provide a diverse potential for use. Like the world of spies and espionage, with nations and their security forces running rings around each other with plots and interference, there’s no reason why a Laundry Keeper shouldn’t do the same. Why hit your player group with one threat when you can have hints, rumours, activities and events overlapping for all of them? Yes, it’ll be complicated to plan and organise, but wouldn’t it be delicious and deeply (evilly) satisfying in a way likely to lead to suppressed cackling and hand-rubbing?

Following the eight major cult sections, the book rounds out with brief overviews – Stacks file cover sheets only – for another seven cults. Rather like plot seeds or adventure hooks, each overview gives you just enough information to get moving and start creative juices flowing. I especially liked Alt Text – who seek to sow seeds of paranoia and mass panic in the alt-tags of online images.

Final Thoughts
The Laundry: Cultists Under The Bed provides an interesting and diverse selection of cults, sects and dubious organisations sure to tax, confound, irritate and sidetrack operatives of The Laundry through a multitude of adventures and campaigns.

As previously mentioned, the eight key organisations have sufficient diversity of purpose that one or more will surely suit your campaign approach. Some have intersecting goals that mean even as your player characters angle for the infiltration and decimation of one, another might have plans to acquire fleeing members or acquire dispersed resources to tax The Laundry another day.

While the smaller cult descriptions at the end might have niche interest as the focus for adventures, they do have interesting scope as templates for your own cult development or as concepts to scavenge from.

A fine resource for any Keeper keen to garnish a Laundry campaign with varied esoteric machinations and heinous cults intent on summoning unmentionable antediluvian forces for their own personal (if incredibly short term) benefit.

Things That Go Fhtägn in the Night: A Review of Cultists Under The Bed, for The Laundry RPG