You are here: Home / Books / Comics / Cosmopolitan: A review of the A1 Annual 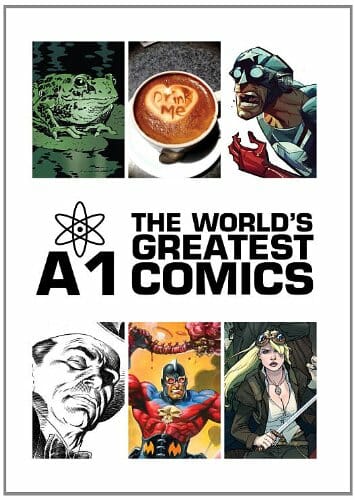 My cover of the A1 Annual simply says; “The World’s Greatet Comics”. Pop open the covers and you’ll soon encounter a huge list of credits that’s chock full of big names.

There’s history here. A1 dates back to the 1980s as a showcase for comics. Even then it attracted all sorts of talent and these comic creators experimented.

The series back, led again by Dave Elliott, as Atomeka teams up with Titan Comics. This is a lovely book to flick through and, in a word, cosmopolitan. There’s all sorts of styles and stories in here. In the annual we’ve stories from the past, in fact we begin with a golden oldie from Joe Simon and the Jack Kirby to begin with, as well as contemporary tales.

If you’re a comic book fan then there’s a lot of love in A1. How can it fail? It’s a collection of fantastic stories from a huge range of writers. Just be aware that this diversity also almost certainly means there will be comic books in the annual that you don’t like.

I liked the detailed but not too large biographies of the creators involved. Insight, for me, always adds to the comic book experience. A1 takes the bios a set further with a bit of artistic exploration – with coffee barista art. That’s right; there’s pictures of hipster juice in this annual of comic book stories. Whereas these images didn’t make my eyes bleed, attacking them as some out of place anti-geek imagery might, I didn’t have the will to pay them any attention. Rather than chapter dividers to be skipped over; The A1 Annual has pictures of coffee.

It’s a sign that A1 is jam packed with goodness that I feel it’s impossible even to whisk through with brief comments on the collection. There’s loads. Instead, I’m going to skip to “The Weirding Willows: Origins of Evil” which is by Elliot, Jessica Kholinne and Barnaby Bagenda. This is a retelling of some of favourite childhood characters. We don’t just get Ratty, Toad and Mole there’s characters like Alice too. It’s superbly drawn, interesting and like most of A1 – well worth the read.

The video above is a montage of photographs taken of the book. It’s put together by Google’s new “Auto Awesome Movie” service in the Google+ app for Android 4.3 devices. Whereas this may be the first ever Auto Awesome comic book tour it is used here to let you have a peak inside the book, for review purposes, without wrecking the surprise or the copyright of the creators for that matter.

My copy of the A1 Annual was provided for review. It’s due out on November 26th with a RRP of £15.99 from Titan Comics.

Cosmopolitan: A review of the A1 Annual

Art Can you identify all these superheroes from their …

Tabletop & RPGs Call of Cthulhu designer lines up for C7’s C…
💰 Copper Coins 💰 Geek Native is an affiliate and may earn commission on purchases you make from third-party sites.
🍪 Privacy & Cookies 🍪 The site uses cookies to survive. By accessing the site, you agree to use your browser to control cookie use or take 1d4-3 privacy damage (tracking). If you defeat cookies via ad blocking, please consider the Patreon. An intro to cookies, and how to control them, can be found here. I Manage Cookies