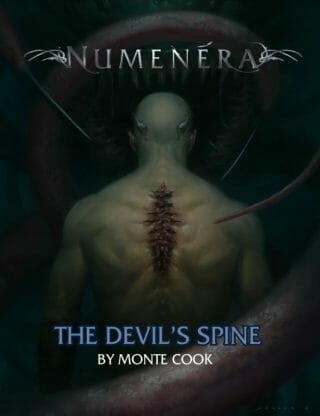 When Monte Cook and his team ran the Kickstarter for Numenera, three of the many stretch goals achieved offered 32-page adventures. Somewhere down the line, Monte Cook Games reached the decision that they would instead combine the three adventures into a single 96-page volume.

With Numenera so fresh and new, a massive world of potential flung out a billion years into our future, The Devil’s Spine would serve as an impressive first stride into this evocative world. According to the publisher’s website, after the guiding hand of the adventures in the corebook, GMs could expect something stranger and more challenging within the pages of this supplement.

With the greatest of respect, I beg to differ…

The Devil’s Spine is a 96-page mini-campaign supplement for Numenera, featuring four adventures that you can either run in a loosely coupled sequence or standalone. The book follows the same format as the core rules, with two columns of text per page, with marginalia of GM notes, advice, page references and intrusions.

The marginalia include many useful cross-references for the GM, both to pages within the supplement and to the core book, the latter identified with an icon.

The book includes maps and full-colour imagery throughout. Many of the images serve as hand-outs, which appear in an 8-page section at the end of the volume. The cover image might also serve as a useful reference image at some point in the game, should the characters encounter the titular Devil’s Spine.

The Devil’s Spine consists of four adventures that a GM can run as a mini-campaign, but which provide hooks suited to getting characters involved with each on a standalone basis.

Each adventure includes behind the scenes information in Background, an overview of the plot in Synopsis, a range of hooks in Getting the PCs Involved, and then the core content divided into convenient chunks, generally focussed on a specific area, location, or chambers within a specific location.

The campaign kicks off with Noble Pursuits, the ‘tavern encounter’ that provides the PCs with their patron and their ‘in’ to the mini-campaign. Baron Tichronus, a nobleman of the city of Uxphon, receives his call to war in a crusade against the Gaians declared by the Amber Pope. While the Baron spends time away, he requires caretakers to keep watch over his property, including his slaves. What can possibly go wrong?

Well, the kick-off for the campaign relies on the principle that curiosity really does tend to kill the cat. However, the cat doesn’t necessarily need to expire immediately. Someone, player character or otherwise, becomes unwilling host of the Devil’s Spine – a parasitic defence mechanism – and the rest of the campaign revolves around getting rid of it.

The PCs can choose the route to their salvation, picking through the three main adventures in whatever order. They seek the Impossible Blade, the drug gharolan, and the good will of the only surgeon capable of completing the operation required. I would have loved a more open world approach to this ‘quest’ – perhaps spoiled by many great sandbox supplements of late – but, The Devil’s Spine adheres to a more traditional and linear format, bordering on a railroad at times.

In Viral Transmissions, the PCs seek out a major threat to all life, hiding in the wilderness to the southeast of Uxphon. The journey could take weeks, unless the PCs can harness some ancient technology to transport them at speed through the underground – specifically, a maglev train fallen into disrepair. The process required to release the train made me grimace. The PCs must find and activate a number of control levers, but no reasonable engineer or architect would locate them in such an obtuse fashion.

The second half of the adventure takes the PCs through the wilderness, seeking out their terrible foe. The journey demands exploration, diplomacy and increasing danger in battle against the swarming enemy. Oddly, the enemy stronghold sits in the shadow of Mt. Zanlis – as outlined in the corebook’s chapters on the Ninth World – and yet this ‘living mountain’ doesn’t figure in the adventure at all, not even in passing.

The same can be said of The Mechanized Tomb, which takes place west of Uxphon, south of the Cloudcrystal Skyfields. One of the key locations, Barrow-Town, appears to lie within plain sight of the Scorpion Sanctum, one of the key citadels of the Convergence. The adventure concerns recovery of the Impossible Blade from the depths of the tomb of Queen Starloscet. To all intents, this is a dungeon, filled to the brim with traps and the hint of great numenera. Why would the Convergence, an organisation with designs on recovering all relics of the past to selfish ends, not try to enter the tomb to claim the Impossible Blade for themselves?

The final adventure takes the PCs to the coast and beyond the Sea of Secrets. After an overland trip, they must seek out assistance from an expert in matters oceanic, then journey out across the waves. As the title of the adventure suggests, what they seek lies Beyond the Maelstrom – but, that ‘beyond’ takes them beneath the surface, rather than out to the far side. Despite encounters with salty sea folk and great whales, the adventure boils down to an assault on the stronghold of an enemy far beyond the PCs power to defeat. The characters must snatch and run, or suffer the consequence.

The supplement rounds off with The War Effort, a secondary plot provided for even greater complexity and depth, should the GM feel the campaign warrants it and the PCs can handle it. Baron Tichronus aspires to assure the safety of his realm at all costs and that means trusting no one. While events engage him in the Cloudcrystal Skyfields, his minions seek out viable weapons of mass destruction.

Despite grand intentions, The Devil’s Spine doesn’t quite push the boundaries I had expected. Indeed, in many ways I felt like I had a trilogy of middling Old School dungeon crawls in hand, with more than a hint of Gamma World and perhaps even Paranoia about them.

In the parlance of the Ninth World, The Devil’s Spine feels a little like unearthing an oddity while in pursuit of an artefact, and I’m not quite sure what I plan to do with it. Had the campaign material provided richer and more consistent backdrops to each adventure, seeded with considered opposition, complex motivations, and the occasional meta-plot, I might not feel so uncertain.

Numenera lies unexplored and unknown before us, a sprawling world of potential – and yet The Devil’s Spine doesn’t quite offer the insight one might have hoped for. That the game’s first adventure supplement seems at odds geographically and politically with the details outlined in the corebook only serves to bewilder rather than excite and impress. The core concept of the mini-campaign has potential, but it invites the intervention of an creative and/or experienced GM to make something great of it.

Underground, Overground, Wombling Free: A Review of The Devil’s Spine 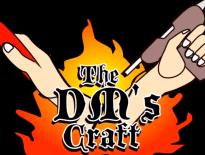 Sites A YouTube channel to watch: The DM’s Craft 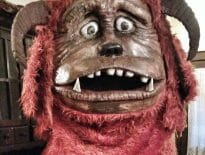