Intended for children, despite being directed by Takayuki Hirao responsible for Tokyo Fish Attack, Little Witches will entertain anime loving adults. I enjoyed it even if there was a tendency to throw in rainbows and hearts.

Nene and Yoyo are are pair of curse breaking sisters. They’re Witches for Hire in a fantasy world. Yoyo, the elder of the two (despite looking much younger – like a child) is particularly powerful and the “Cursery Sisters” have a %100 record.

There’s action from the very first second in Little Witches. Yoyo and Neme battle a huge monster, destroying the forest, shooting blasts of power from its mouth while the curse water that the creature is made from gives it a great deal of resistance against magic.

The real trouble begins when a huge chunk of the forest is torn up as a tower of buildings, all held together by vines and greenery, rise from the ground. These are buildings that look awfully like modern tower blocks from our land.

And so Little Witches Yoyo & Nene becomes a magical girl anime (in fact an alternative English title for the anime is Magical Sisters Yoyo & Nene) with the twist that our hero is simultaneously confident of her powers and yet becomes stranded in our reality.

Other common trappings of the magical girl genre remain in place. Yoyo transforms. In this case she’s simply an older version of herself. Why the transformation happens isn’t made clear, doesn’t matter, does serve to emphasise the dramatic change in circumstances and may hint at how magic works in this world.

There is also a magical side kick in the form of a very strange cat. “Is that really a cat?” someone asks in the film. I’m not sure.

Despite an odd premise that quickly escalates into world threatening epic levels of certain doom Little Witches is a strangely personal and effective anime.

Family plays a huge part in Little Witches. The film is two thirds through before adults play any part at all. For the most part we have teenagers looking out for their family, acting mature and yet childish at the same time. I suspect that’s the juxtaposition of worlds that the Magical Girl typically wants to show; reality in contrast to fantasy, childhood to adulthood and freedom to responsibility.

There are some strong visual scenes in Little Witches (Majocco Shimai no Yoyo to Nene in Japanese), moments that leave you in no doubt that you’re watching a magical fantasy but this isn’t an anime that attempts to blow you away with stunning visuals. This is an anime that invokes the far more sly tactic of getting to you through your emotions.

Girly? I don’t think so. This is a multi faceted story that will please folk. 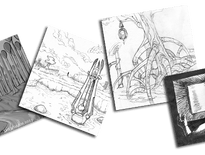 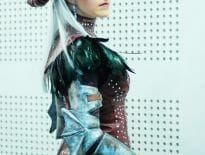