You are here: Home / Books / Comics / A review of The First Kingdom: Birth of Tundran 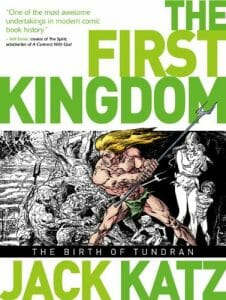 This is a classic. The First Kingdom was first published back in 1974, ran for over a thousand pages and finished three years later. The series is written and illustrated by Jack Katz and it’s a compelling style. Katz draws in tightly knit back and white, it’s a dense style that must have taken ages to produce.

Titan Comics are responsible for finally giving this historic series a reprint. There’s an interview at the start of the book along with some introduction and I found it hugely useful. In it we discover a young Katz’s theory of the cycle of life; well, of everything.

And so The First Kingdom begins after the apocalypse and it’s hard to tell when it happens but that setting swiftly becomes pre-historic. Right from the start then we have clues to the cycle. We have our hero too – well, actually, we have his dad Darkenmoor who very quickly gets out of his depth.

Darkenmoor attracts the attention and the affection of a goddess. We know that’ll only ramp up the danger levels. It’s his son, Tundran, who lends his name to the full name of this volume: “The First Kingdom: Tundran”. Tundran gets about half the book.

In many ways The First Kingdom is a saga of epic proportions. We go from the pre-history of the start and see even futuristic scenes. There are themes that run through the books; characters face tests and challenges, clothes remain unpopular, there are all sorts of meddling and mismatches.

It’s a nod to Katz’ skill that he can tell such a complex story, so clearly and so carefully while keeping it exciting and interesting. The only downside I encountered was the layout of the book. On complex pages there are many panels and it is not always clear which dialog to read next.

I enjoyed The First Kingdom: Birth of Tundran but I’m even more pleased that I read it. This feels like a series that anyone aspiring to call themselves a comic book buff should read.

Disclaimer: My copy of the book was provided for review. The First Kingdom Vol 1: The Birth of Tundran, £19.99, Jack Katz, Titan Comics.

A review of The First Kingdom: Birth of Tundran 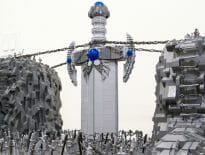 Geek Stuff The Tomb of Swords in LEGO 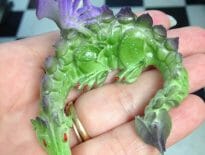