This is an exclusive sample of Doom Striders from Bastion Press More details can be found at the end of the page.

Whether battling lone giants or fighting off hordes of hobgoblins, defense of land (or other territory) in a fantasy world can be a daunting task. The doom strider is the natural evolution in defensive, magical technology, proceeding from magical armor to simple animated weapons, to more complex and powerful golems, and finally to the doom strider.

Doom striders are large animated suits of armor controlled by the wearer. They incorporate enormous strength, speed, and raw off ensive power into a package that any warrior can be trained to operate. More importantly, they provide a platform through which wizards can safely channel magic while remaining protected behind enemy lines. A doom strider is the heavy assault vehicle of the fantasy world, an enormous creation capable of laying waste to vast hordes of enemies or going toe-to-toe with more powerful individual creatures.

Above all, these are weapons of war. They are most effective when deployed to battlefields, where wide open spaces and fields of fire allow them to control the environment with superior weaponry and greater range. While a doom strider—especially the smaller models—could be used to venture into dungeons, they can be more difficult to control in such small spaces and are often unable to use all of the weapons at their disposal when so confi ned. Of course, this does not prevent adventurers from acquiring these weapons and using them to further their own goals. Ever an ingenious and inventive lot, adventurers have done much to expand the role of the doom strider in the worlds in which they exist.

In this book, you will find all the information you need to add doom striders to your campaign. From how these powerful weapons might be introduced into your world, to the ways in which they can transform the battlefi eld, this book provides you with the tools needed to bring doom striders to life. 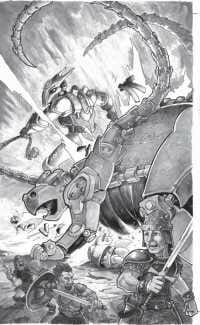 Animated statues and magically-enhanced suits of armor are not that far removed from one another, so it is not much of a leap to assume that the two would eventually be combined. A doom strider is essentially a powerful suit of armor that increases the size and power of its wearer. While within a doom strider, a captain becomes much more powerful, capable of wielding weapons that simply cannot be used without the power of a doom strider to back them up. Doom striders represent a natural evolution of the fantasy arms race. Because they are operated by mimicking the motions of the captain’s body, they can be piloted with relative ease and allow skilled combatants to use their natural abilities while within the construct. Because they are so large, they can be crammed with weapons and layered with enormous plates of armor. As a further benefit, they allow several individuals to work together as a team to deliver even more pain to their enemies than they could accomplish on their own.

In addition to their martial capabilities, doom striders are also powerful deterrents. A horde of orcs might not think twice about taking a run at a defended fortress, but the presence of a 50-foot tall giant within that same fortress may very well give them pause.

Doom striders also serve as a sign of prosperity and advanced magical knowledge within a territory. Any kingdom that fields a doom strider is showing its neighbors that it has enough wealth to construct such a monstrosity and that it has the magical expertise to get it up and running. The doom strider is a formidable figurehead, one that can give even aggressive, well-armed bands of attackers serious pause.

For religions, doom striders serve as iconic symbols of faith. A church that constructs a doom strider in the image of its gods or divine servants now has a powerful, physical representation of its faith. Not only does this draw in followers (who are probably too frightened to not join a church after seeing its priests piloting such enormous weapons), but it also dissuades enemy religions from doing anything rash. Doom striders also present a threat that large and traditionally arrogant creatures often take more seriously than a unit of armored knights. A dragon, for example, is unlikely to be overly concerned with your average man-at-arms, but when that is encased in tons of powered armor and bristling with weapons, it becomes a more obvious threat. In a world of monsters and magical mayhem, the doom strider can give a ruler or military leader the space he needs to negotiate with hostile forces.

The need to transport valuable cargo can also give rise to the doom strider. When the sixth merchant caravan in a month goes missing, it might be a worthwhile investment to create some doom striders with cargo capacity to lug the goods from place to place. Fast as a horse and able to traverse difficult terrain, doom striders may even become the primary means of long-distance transportation in some cultures. A land filled with shallow swamps, for example, could definitely benefit by having large, bipedal constructs capable of transporting groups through terrain they would otherwise be forced to traverse on foot. And, of course, the most likely reason for doom striders to arise in a campaign is through the meddling of a group of adventurers. Wealthy and bored wizards along with their companions are quite likely to come up with these massive engines of war simply to pass the time, or to test out a pet theory. With ridiculous wealth and power at their disposal, there’s just no telling what adventurers might devise.

The Doom Strider as Creature

When using doom striders in your game, it’s easiest to think of them as hybrid creatures that modify the captain’s abilities, saves, and other mechanical features. They work—except as outlined below —exactly as other creatures and follow all of the same rules for them. The diff erences are minor, but important to take into account. In order of importance, they are: