You are here: Home / GameWyrd / Echoes from the Wyrd / RPG Previews: Dice and Dramatics | Echoes #17

This is preview of Dice and Dramatics from UltraMyth More information can be found at the bottom of this preview.

Ask yourself why your character has chosen their class – what in their life has led them to pursue this particular career. A sorcerer might dabble in magic out of a natural born talent, while a wizard might pursue it purely out of interest, or because their peers or relatives expect it of them.
Class can affect a player character’s outlook on life.

Barbarians hold freedom in high esteem, and despise constraining laws. They love the wilderness, and often fail to see the value of civilised pursuits. Barbarians are often of simpler mind, not necessarily because they are stupid, but rather due to their upbringing. They are usually less patient than other classes and often mistrust things they don’t understand, especially magic. They are often quite superstitious. The Viking Berserker warriors and Conan the Cimmerian are good examples of stereotypical barbarians.

Bards love to travel and to entertain. They love to be the centre of attention. Bards live for the passions of life, and often can afford eccentricities or quirks that serve to define them as unique performers rather than madmen. Liken bards to modern rock stars and actors, who wish fame and fortune from their talents, or for a more archaic viewpoint, potential jesters and travelling minstrels.

Clerics are usually more withdrawn than other characters, as they often are used to spending large amounts of time cloistered in churches and temples devoting their time to their patron god. Faith is everything to them, and they are most likely to try and convert those they meet, as spreading the word is a part of their job description. This attitude can conflict with other characters, especially those of chaotic alignments.

Druids have a great respect and zest for nature and life, which they often choose to champion. They feel constrained and disgusted by civilisation, especially big cities where the streets are covered in filth. Druids have a habit of getting high and mighty about their ideals, just as clerics can, however their focus on nature likens them to modern environmental extremists.

The civilised races represent the most sophisticated societies in a fantasy setting. They are learned, have structured societies and kingdoms, and laws that govern the people, be they restrictive or very lax. They also have a much higher technology than savage races or monsters, with craftsmen producing many different kinds of good that make the various aspects of life more endurable than they otherwise would have been.

The dwarf family is made up of four different subspecies; hill, deep, duergar and mountain dwarves. Each race has their own unique distinguishing features that separate them from one another. The stereotypical details of a dwarf are presented below.

Appearances: All dwarves are short, standing a foot or more shorter than humans on average, but their bone structure is broad and powerful.

With the exception of the duergar, who are bald and have no body hair, dwarves’ bodies are covered in thick hair and they sport facial growth from a young age. Dwarves pride themselves on the condition of their beards, and some dwarven women too can grow them. Due to this fact, it can be difficult to tell dwarven men from women, at least from a distance.

Deep dwarves are slighter of frame to than their cousins, with reddish-tinged skin pallor and dull blue eyes. Their hair tends to be from a bright red to straw blonde.

Mountain dwarves are identified with their lightness of skin and lighter hair than Hill dwarves.

Personalities: Dwarves tend to be stubborn and greedy, but strait forward and truthful. Cheerful dwarves are usually only be found drunk – often they appear grumpy, moody and temperamental. Seldom will they be anything but serious, laughing and enjoying life only in the company of their most trusted companions.

Many dwarves are judging and very comparative to a point where they might seem annoying or haughty to other races. Wronged dwarves are vengeful.

Their long lifespan leaves them slower to trust and make friends than most, and most suspicious of non-dwarven races, however in time they can make the most dedicated of companions.

Dwarven respect is often given grudgingly, especially to members of races that are traditionally disliked or hated by them. However, there sense of honour overrides their stubbornness when appropriate admiration is due.

Deep dwarves are antisocial, especially when dealing with non-dwarven races. They prefer to deal with their own kind, or not at all. Duergar are as monotonous and drab as their appearance, and tend to be of a more malignant alignment.

Morals: Of great importance to the dwarves is the concept of family. Dwarven society is made up of clans, each one being nothing but a large family of extended relatives. Honesty and honour are high-held morals. They believe strongly in justice, but vengeance is not beyond them.

‘Slow and steady’ would perhaps be a dwarven motto, for they are careful and tenacious by nature.

Dwarves have a less refined approach to etiquette to than humans and elves, and they tend to be messy eaters.

Likes: Even the dowdy duergar dwarves to some extent appreciate jewellery and craftsmanship, though their lacklustre crafts could only be seen in their private dwellings. However, the other dwarves are defined by their expert craftsmanship and lust for the glitter of gold. They are also avid drinkers of ale and any other liquor able to get them goodly drunk.

Most dwarves get along fine with gnomes, and are quite tolerant of Halflings and humans.

Dislikes: Orcs, goblinoids and giants are hated enemies of dwarves. They also have a dislike of elven temperaments, finding them too unpredictable as well as indecisive and undependable. Similarly, dwarves don’t get along with humanoid personalities that have elven qualities.

Upbringing: Dwarves are usually brought up in large underground cities and mines. Dwarves are as famous for their mining as they are for their crafts and ache for gold. From childhood to adulthood lasts between 40 to 50 years, a time when their close-knit family carefully teaches them, the dwarven ways.

Family: Dwarven families are large and are considered very important. One great family composed of many smaller families, related through marriage and distant relations, makes up a dwarven clan. A patriarch usually rules the clan, often a king, and rarely a queen.

A dwarven character is likely to have a lot of relatives still surviving, unless for some reason she is the last surviving member of her clan. Be this the case, then her main reason for existence would be to seek vengeance.

Role-Playing Tips: When role-playing as a dwarf, consider acting in the following ways:

"Abandon the search for Truth; settle for a good fantasy"
Echoes from the Wyrd 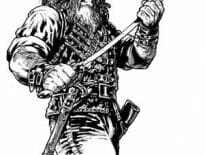 Echoes from the Wyrd RPG Previews: The Smuggling Ring | Echoes #17