You are here: Home / Books / A review of Beyond Rue Morgue: Further Tales of Edgar Allan Poe’s 1st Detective 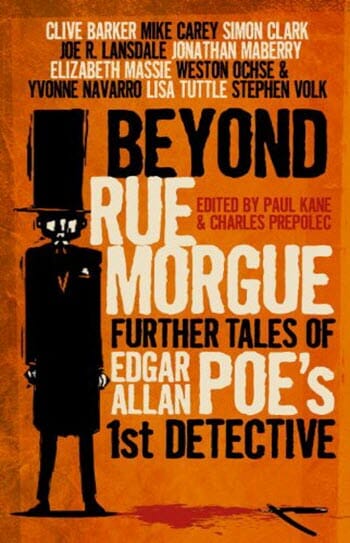 I enjoyed Poe’s work and Rue Morgue is one of my favourites. Despite having read Poe, despite having read the adventure of Chevalier C. Auguste Dupin and his nameless narrator I somehow missed the history of the short story.

The stories continue the adventures of “ratiocination” of Dupin. We also follow his grandson, who becomes a Pinkerton detective and even his great-granddaughter. Yes, there’s a Sherlock Holmes connection too.

This may upset some readers but Beyond Rue Morgue brings in the supernatural. In fact, we go a bit Cthulhu. I don’t mind at all. I feel it’s in keeping with the spirit of the character and of Poe. Besides, I enjoyed the story.

Beyond Rue Morgue: Further Tales of Edgar Allan Poe’s 1st Detective was put together by the editors Paul Kane and Charles Prepolec. Kane is a sci-fi, fantasy and horror author who co-edited the horror anthology Hellbound Hearts. Prepolec is a freelance writer (and reviewer!) who’s worked on the Sherlock Holmes anthologies Gaslight Grimoire and Gaslight Arcanum. If you combine all those genres then it’s little surprise you come up with an anthology like Beyond Rue Morgue. Beyond Rue Morgue manages to be tightly focused on Dupin and his line and yet broad in scope.

I’ve got to recommend this book.

My copy of the book was provided by the publisher. Beyond Rue Morgue, Titan Books, £7.99, Paul Kane, Charles Prepolec, et al.

Geek Stuff Renly Baratheon cosplay
💰 Copper Coins 💰 Geek Native is an affiliate and may earn commission on purchases you make from third-party sites.
🍪 Privacy & Cookies 🍪 The site uses cookies to survive. By accessing the site, you agree to use your browser to control cookie use or take 1d4-3 privacy damage (tracking). If you defeat cookies via ad blocking, please consider the Patreon. An intro to cookies, and how to control them, can be found here. I Manage Cookies