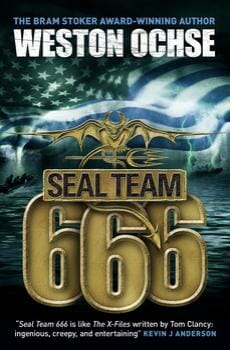 Weston Ochse is a former intelligence officer and a Bram Stoker Award winning author. At the start of this month Geek Native took a look at his SEAL Team 666, enjoyed it and started to ask Weston about roleplaying games, film rights to the book and even about magic rituals on social media. Amazingly, he provided answers.

I’ve described SEAL Team 666 as “SEALs versus Demons”. Is that a fair summary? How would you describe the book?

That’s a fair description, although our SEALs don’t always fight against demons. I thought about saying that this is plain G vs E (good versus evil), but that’s too simplistic too, because a government is neither good nor evil. It just exists. I do think though that as we follow our SEALs through adventures, it is best intentions against ultimate evil, and in the end, like any military unit, the men of SEAL Team 666 fight for themselves first, and their country second.

Where did the inspiration for the plot and the characters come from?

So me, Peter Straub, Jack Ketchum, and a dozen other folks are sitting around at the World Horror Convention in Austin, Texas, at the dead dog party drinking the hell out of Jack’s bottle of Glenlevit, when President Obama appears on the TV and announces the death of Geronimo. We all cheered and it was crazy. Then a week later I get an email from an editor at St. Martin’s Press and the book takes form. I don’t think this book would have happened if we hadn’t taken down Bin Laden.

Are military/supernatural crossovers common or rare? Why do you think that is?

I think they are. I love them. My first real example I can think of are the Casca books, remember those? A series of books following the life of the Roman foot soldier who was condemned to live for an eternity and never die. To me, that was my first introduction to the form and I loved them. As far as why are they rare? I know that for what seemed like an eon, major publishers didn’t want to mix genres. It seemed that they wanted their plots easily encapsulated and organized. This has changed in recent years, which has led to a bounty of cross-genre fiction of all types.

Oh, look, now you’re getting all serious and philosophical. Let me strap on my letters to answer this. Yes. I think you’ve hit it on the head with your idea of memes. Readership focuses on specific genres when readers are in fear of something they cannot control.

The eighties were huge for horror. Many people think it was the cheesy titles and the glossy covers that almost killed the genre. I believe in no such thing. It was the fall of the Soviet Union. Generations today don’t understand the actual physical fear we lived under. They don’t know about the nuclear fallout drills we had to do as children under our desks week after week, inculcating within us the idea that at any time, at any moment, some irrational Soviet or American could press a damned button and end us all. When that fear went away, so did readers’ needs to invest themselves in something even scarier to take their minds off what really kept them awake at nights.

Now we have transnational terrorism. I watched in utter fear and outrage when the London metro was hit. From the events of 9/11 in America, to Bali, to Barcelona, even to the crazy religious cult in Japan, the world is once agent beset with a danger that could occur at any moment, at any time, in any place, with no warning. The more we think about that, the more it scares the shit out of us.

Regarding Godzilla, not only was the monster a fear of nuclear technology, but it was also synecdoche for Japan’s idea of being a nationalistic power once again. It was both their fear of success and their want of success, and everything that might bring with it

“You take away that control and we’re terrified. I get into this even more deeply in SEAL Team 666: Age of Blood”

Do I think demons and possessions are a reflection of a universal fear of unregulated immigration? Now that’s an even deeper idea. It just might be. But just as the Japanese created Godzilla to show their lack of control of their prospective future, demons and possession are the epitome of loss of control. If there’s one thing as human beings that we fear more than death, it’s our lack of control of our present, our future, and of ourselves. You take away that control and we’re terrified. I get into this even more deeply in SEAL Team 666: Age of Blood.

Does modern dark fiction owe as much to the likes of Poe and Lovecraft that, say, modern fantasy owes to Tolkien and Lewis?

Damn. Once again with the letters. Am I ever going to be able to take this damn itchy robe off? Yes and yes. But they all owe their ideas of the changing human condition and how that can be represented through the filter of meta-fiction to Mary and Pierce Shelly, not only for her The Modern Prometheus (Frankenstein), but also his introduction to the same. Not only did this work bridge the Romantic and Gothic Literary Periods, but they also solidified the idea that horrific, fantastic and science fiction could be a medium to tell greater tales. From Shelly, to the post-Victorian Gothic Period, we see an ever increasing number of authors embracing these genres and molding them to become their own, much like the authors you described. We are their descendants.

The news is that a movie studio has bought the rights for a possible film. Does that influence Age of Blood and other possible sequels?

Perhaps your choice of verbs is a little optimistic. Instead of bought the rights let’s use has been optioned. MGM optioned the rights to make SEAL Team 666 into a movie and that is very cool. They are a magnificent old Hollywood production company and have the deep pockets to do this movie right. Will it be made? God I hope so. Does it influence Age of Blood and other sequels, yes, it does. I tend to write visually. Having written screenplays, I understand the structure and form and tend to write novels like one would expect to see a movie. This helps when looking at works to translate from the page to the screen. 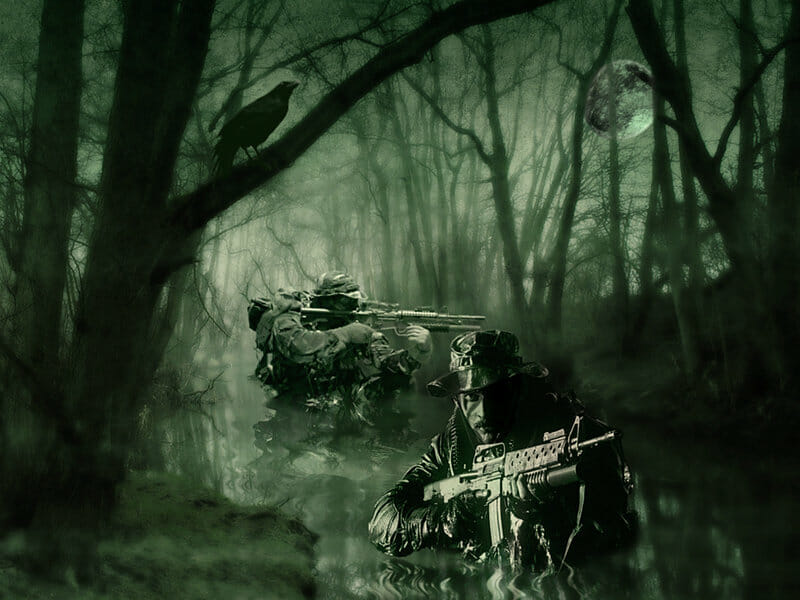 SEALs by Works In Progress.

Publishers are keen for books and films to get as much social media coverage as possible. In SEAL Team 666 we see the opposite – government agencies being able to delete or cover up unwelcome Tweets and Facebook shares. Do you think that happens? Should governments be able to regulate these conversations?

Should governments be able to intervene in my freedom of speech–absolutely not! We’re seeing the battle play out in China right now as they try and limit access, and shut down Google. I’m not paranoid, but I’m also not naive enough to believe that any government has the best if intentions for its people. It’s very easy to overstep someone’s liberty. It only takes one person in the right place.

In a world where the right knowledge could summon deadly shadows and demons is technology more of a friend or a foe? Just how dangerous could a Facebook meme involving the wrong magical glyph be?

HA! Now you’re getting somewhere. In the world I’ve created for SEAL Team 666, magic is rare. Knowing the correct incantations and the correct glyphs aren’t merely the path to power. It’s a path littered with much more than that. In someone else’s universe, a simple FB Meme could have the potential to destroy sight, mind, even the planet. I try and keep a little more perspective than that, though.

Would you allow a specialist publisher to make a roleplaying game out of the SEAL Team 666 world? Could you envision people sitting around the table playing SEALs battling against evil demons instead of warriors battling against dragons in dungeons?

“Would you allow a specialist publisher to make a roleplaying game? Weston Ocshe; “Hell yes””

I’m using my Vorpal K-bar of Wounding against the Merman, while my apprentice is using his +4 HK 416 machine gun of Destruction. Let me roll the dice! Double Ought!
Hells yes! I’d love to see that. As an old gamer, that would make me smile the most.

Lastly, turning from hobbyists playing in a SEAL Team 666 RPG world to professionals playing your characters in a movie, which actor do you think has the right sort of style and look to play Jack Walker?

Every time I try and answer this question, I have a different answer. There are tons of actors out there who can play him. The key is for a person to be able to convey the everyman. Because regardless of out outlandish Walker’s past might be, he represents us. He’s a regular guy, put in supernatural situations. Whichever actor is chosen needs to be able to pull that off. If they can manage that, box office sales will be through the roof.

TV New Doctor Who series 7 posters
💰 Copper Coins 💰 Geek Native is an affiliate and may earn commission on purchases you make from third-party sites.
🍪 Privacy & Cookies 🍪 The site uses cookies to survive. By accessing the site, you agree to use your browser to control cookie use or take 1d4-3 privacy damage (tracking). If you defeat cookies via ad blocking, please consider the Patreon. An intro to cookies, and how to control them, can be found here.
I Manage Cookies