You are here: Home / Books / Sherlock Holmes: The Breath of God review 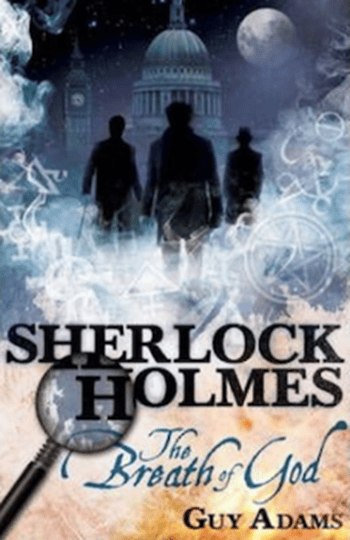 What’s this? A book featuring Sherlock Holmes, arguably the world’s greatest detective (unless you count Danger Mouse1) and the supernatural? How could this work, and should it even be attempted? Luckily for me, instead of discounting the novel as some form of sacrilege, recently I had my views broadened from reading an interesting article from Geek Native. Here, author George Mann gave his views and opinions on this matter.

Of course being convinced that involving Sherlock Holmes in new adventures is one thing, convincing me that you can blend his scientific mind and logical deduction with the supernatural is another. Indeed as Guy Adams, author of Sherlock Holmes: The Breath of God eloquently puts it:

“But you see Doctor, I do not believe in demons.”

I am happy to say, and I don’t feel this gives away too much, that Holmes remains himself throughout the novel, and that Guy Adams agrees with me. Sherlock Holmes is a man of logic and facts, and will forever be so. I was actually pleasantly surprised how Sherlock dealt with, and interacted with the supernatural elements in the book. In my opinion the juxtaposition of these two extremes worked very well, and indeed the approach to the supernatural is central to the success of this novel. That being said, this is primarily a detective story, with the occult featuring within the storyline. This is not a reinterpretation of the world at large, and not some action packed story where Holmes knows kung-fu (unlike the recent movie adaptations, at least I think it was kung-fu).

I should also add that Sherlock Holmes is not perhaps as ubiquitous in the story as you might expect. Instead that honour goes to Dr. Watson. It is through is thoughts and experiences that we largely follow this interesting yarn. And that is of course an important point. The story is both interesting and indeed well written. The fact that it features both Sherlock Holmes and Dr. Watson is secondary to both those points. Guest appearances can’t change a poor story into a good one. We are also introduced to, Guy Adam’s versions of, Dr John Silence and Thomas Carnacki. These two believers, a “Psychic Doctor” and supernatural investigator, respectively, make interesting characters and allies to Holmes and Watson, and play the Mulder angle to Holmes’s Scully.

Again, for one of my reviews I have neglected to go into the plot. This is of course intentional. The plot progression with its twists and turns is central to this story, and arguably any detective story and I am loath to give away anything that might take enjoyment away from discovering this for yourself. There are a few twists in this novel…

So how do you reconcile a story involving Sherlock Holmes and the supernatural? Well once you “eliminate the impossible, whatever remains, however improbable, must be the truth.” (Too obvious? sorry couldn’t resist it). And the facts dictate that this is a well-written interesting story that effectively utilises the rational Sherlock Holmes to explore the supernatural events of “The Breath of God”.

1 — “And so the world is saved. Penfold is rescued and Greenback is banished forever. Well, maybe not quite forever… But another triumph for the world’s greatest detective… Danger Mouse!” — The Four Tasks of Danger Mouse