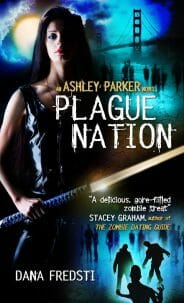 Plague Nation is the sequel to Dana Fredsti’s Plague Town. We keep pace with Ashley Parker as she copes with the unfolding zombie plague. Parker isn’t just immune to zombie bites; she’s a wildcard and picked up enhanced speed, strength and senses after fighting off the Walkers infection.

Most folk aren’t as lucky as Ashley.

Bart shuffled out onto the front porch to collect the morning paper, cursing when he saw that their idiot paperboy had once again managed to pitch it nowhere near the house. Instead it lay in a pile of slush in the middle of the front yard, meaning he would have to get his slippers soaking wet to get the damn thing.

Grumbling, he made his way carefully down the slippery steps, moderately grateful that Belleville was experiencing a relatively mild winter, and it wasn’t actually snowing any more. Early November in Wisconsin wasn’t always so gentle. Even so, the sky was a solid gray layer of clouds.

Bart managed to retrieve the paper without mishap, and turned to go back into his house, but paused as he noticed a pile of newspapers on Lucy Swenson’s front stoop. His first thought was how come the little shit of a paperboy had managed to get his neighbor’s papers right up against the front door.

Then he frowned. Why hadn’t Swenson picked up her paper? Bart counted at least three in their plastic bags lying, in the half-melted snow on the cement porch.

No, this wasn’t like Swenson at all. Hell, Bart could set a timer around her daily routine. Porch light off at 6:30am, step outside at 7, always wearing a scowl that frightened small children…. Pick up her paper. Grumble something under her breath—usually about the neighborhood dogs ruining her yard. Go back inside and slam the door. She only reappeared when Belleville’s lone postal carrier delivered her mail, and harangued him about all sorts of crap that had nothing to do with the postal service.

Porch light on at 6pm, sharp—even in the summer.

With this last thought, Bart realized the porch light at his neighbor’s house was still on. No, that wasn’t right. Could she have fallen and hurt herself? As much as he disliked Lucy Swenson, the cantankerous old bitch was still his neighbor. And in a place as small as Belleville, people looked after one another.

Bart sighed and pulled his terrycloth robe tightly around him, retying the belt in a secure knot before carefully making his way onto his neighbor’s property, avoiding piles of muddy slush. Even so, the cold wind gusting across the yard penetrated both robe and flannel pajamas, sending an unwelcome chill straight through his bones.

As he approached the porch, Bart’s eyebrows shot up as he peered at the mailbox mounted to one of the porch supports. It was stuffed to overflowing. A chill tickled his spine that had nothing to do with the wind.

Careful to avoid patches of ice on the cement steps, Bart navigated his way to Lucy’s porch and rapped on the front door.

“Miss Swenson?” He’d known his neighbor for years, long enough to call her by her first name, but she’d have a conniption fit if he did it. He knocked again, more vigorously. “Miss Swenson?”

He held his breath, and thought he heard something. Bart pressed his ear to the door. It was a thumping sound, followed by a noise as if something was being dragged across the floor.

He went around the porch until he’d reached the living room window. His view inside was obscured by snowy white eyelet curtains, with hardly any space between the panels. The interior of the house was dark. He thought he saw something moving inside, but it was hard to tell.

“Miss Swenson—you okay in there?”

He heard a low moan. It didn’t sound good.

That decided him. Putting his shoulder to the door and a hand on the doorknob, he pushed and twisted at the same time. The door opened easily, and Bart stumbled, practically falling inside the front hallway. He caught himself, his right knee screaming at the unexpected twist. The pain, however, was quickly overwhelmed by the stench that wafted through the house, like an overflowing port-a-potty in the heat of summer. Slipping, Bart fell to his knees into a puddle of viscous black fluid. He began choking on the thick smell, his gorge rising even though he hadn’t even had his first cup of coffee yet.

Something was dead in here.

Trying not to panic, he pulled himself to his feet, ignoring the ache in his joints and trying to ignore the foul black goo that now coated the knees of his pajama bottoms and the hem of his robe. Slow, stumbling footsteps sounded in the living room to the right of the front hall.

“That you, Miss Swenson,” he said hopefully, covering his nose and mouth with one hand.

The hair on the back of Bart’s neck rose. Something was really wrong here, and he realized the best thing he could do was leave. Right now. But his conscience wouldn’t let him do so without one last try.

“Miss Swens…?” Bart’s voice broke in the middle as another low, guttural moan sounded. The footsteps drew closer, lurching across the living room.

Bart stumbled backward. His gut screamed at him to get the hell out, go home, call the cops and lock his house up. Just do it now.

He turned toward the front door, feet slipping again in the stinking black goo that covered the hallway floor. His outstretched hand hit the edge of the door, inadvertently sending it slamming shut on his fingers. He stifled a gasp of pain and fell again to his knees.

The footsteps rounded the corner of the living room as Bart clutched at the doorknob, slimy hands giving little grip. Finally it turned in his hand, and he might have made it out if he hadn’t paused to look back.

It was Lucy Swenson, several days dead, but somehow walking even as black fluid and blood oozed out of her mouth, nose, and eyes—dead milky corneas framed by bloody yellowed whites. Her housecoat was filthy, and stuck to her body grotesquely. And she stunk, plain and simple.

This exclusive extract was posted as part of the Plague Nation blog tour, celebrating the release of Dana Fredsti’s new novel. For the opportunity to win a copy of the book, simply tweet:

Find out more about the book and the tour at: www.titanbooks.com/plaguenation. 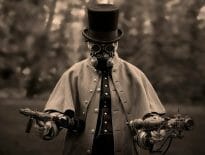 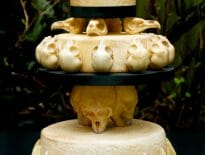