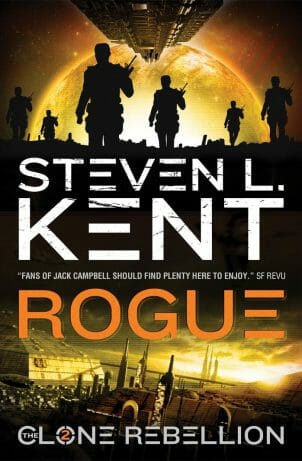 Rogue follows on from Clone Rebellion: Republic. The set up involves a controlling republic that bullies the spiralling arms of the intergalactic human colonies through the twin hammers of politics and a large and mainly clone army.

Our hero is Wayson Harris who has risen up through the ranks from being a just graduated marine to an officer. His promotion has been down to circumstance, due to his ability to think and act differently (unlike the clones who tend to act and then think) and through guardian angels elsewhere in the Navy.

If there was a lingering suspicion that Harris would be far less of a hero had events turned unlucky rather than lucky and without the watchful eye of superior officers then these concerns are addressed in Clone Rebellion: Rogue. This is the book where luck and events turn against our hero and some of the supporting pillars and characters are removed.

Clone Rebellion: Rogue is the book that moves the plot towards the promise held in the title of the series – the clone rebellion. This would have seemed impossible previously because all clones are programmed with a genetic switch which kills them should they ever discover they’re clones.

The book’s greatest feat is taking the impossible and making it possible – while keeping the transformation plausible. In the first book Steven Kent does such a good job at portraying the strength of the republic and justifying the lack of concern around the few, fringe, poorly equipped separatists that any significant change seems impossible. By the end of Clone Rebellion: Rogue you’ll be nodding your head and telling yourself; “I saw that coming”.

Equally impossible and yet entirely plausibly woven is how some enemies transform into “needs must” allies and partners.

The challenge now rests on the third book. Where can we go next? In particular; what can Harris get involved with that keeps the readers interested and the character relevant.