You are here: Home / Books / Comics / The Identity Thief and Bryant Dillon of Fanboy Comics 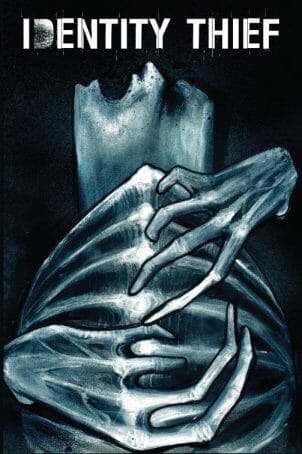 I took the chance to follow on from Paul’s review to bombard Bryant with some questions.

My co-founders and I created the company originally to publish several graphic novels that we were producing together, but, as many creations do, it took a life of its own and soon the site had expanded to offer our readers reviews, podcasts, newsletters, convention coverage, interviews, and much more. These days, Fanboy Comics seeks to provide an outlet for up-and-coming creators and deliver exciting, informative, and original web content to our readers.

Okay, you’re busy with life and with growing Fanboy Comics so why decide to go for a graphic novel too? What was the inspiration? What was the rationale?

Well, my co-founders and I started out as creators ourselves, so while we need to maintain the inner workings of FBC in order to have a platform for presenting our content, the last thing we would want to do is stop our own creative pursuits. We love the medium of sequential art and the creative talent that is drawn to the comic book industry, so we were extremely excited to produce our own graphic novels and step onto the field. I had some experience in self-publishing, so it seemed like a natural choice for us.

Without spoilers how would you sum up Identity Thief?

‘Identity Thief’ is a story with a similar tone to an episode of ‘The Twilight Zone’ or ‘The Outer Limits’ and deals with a young couple moving into a new apartment and discovering that their new home already has a current resident that can’t wait to get to know them, inside and out.

With respect to the summary you’ve just written – was that the book you set out to write? Or did the project evolve, shape and grow as it progressed?

The final version is very similar to the initial concept we started with, although it was originally conceived as part of a horror anthology film that would have also included ‘Something Animal,’ FBC’s first graphic novel. When we decided to shift to the graphic novel medium, there were only minor changes made to the plot and story. 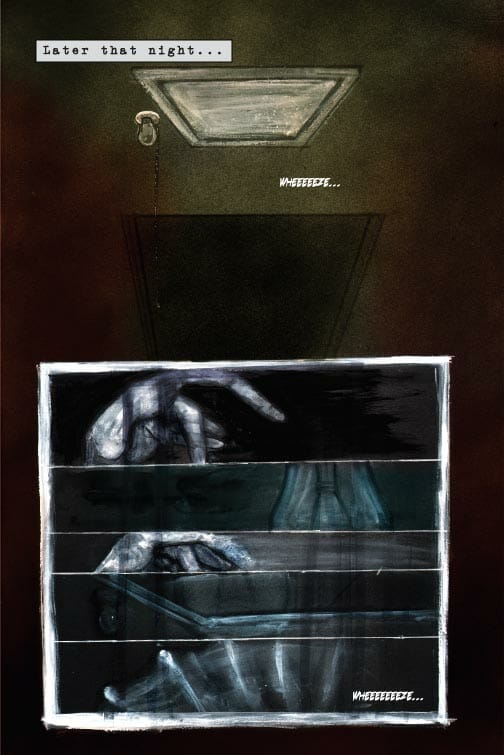 Are there some stories that suit the graphic novel and comic book formats especially well? Is Identity Thief one of them?

Well, graphic novels and comic books are visual mediums, similar to the medium of film, so stories that are told visually tend to work best. ‘Identity Thief’ is definitely a visually focused story in the fact that there is little dialogue and much of the story relies on the visual interpretation of the reader. I always consider it a sign of strength for a comic or graphic novel to be able to rely on visuals alone to tell the story. Ricardo Delgado’s ‘Age of Reptiles’ from Dark Horse Comics is a great example of this.

The book contains impressive art from Meaghan O’Keefe. Did you have O’Keefe in mind from the start of the project or did you have to find an illustrator to suite the book once you had started?

Meaghan’s work is beautiful, and I actually approached her with several projects and let her choose the one that suited her tastes best. That was ‘Identity Thief,’ and, as you can tell if you peek inside the book, her work was the perfect match for this story. It’s hard to make a static medium, like sequential art, have the same creep factor that can be achieved on film, but I think we succeed in this area with ‘Identity Thief’ and a lot of that is owed to Meaghan’s artwork.

Does signing big name illustrators (or authors, for that matter) indicate success, acceptance and even quality? How does that reflect on the indie scene and the talent pool of up-and-coming illustrators?

It’s hard for an indie book to gather attention in this industry due to all that is out there and the limited amount of readers, so a big name can help to draw attention and bring guaranteed sales, but I don’t believe it’s a necessity. At FBC we’re very focused on helping to bring attention to new creators in the field. While it’s always exciting to work with those whose past work is admired by many, the industry can’t forget that part of the reason comic book readers return again and again to the medium is to find original and exciting new works unlike anything they’ve seen before. New talent, whether in writing or illustrating, is a great place to find bold, new creations and creators. Who would you list as two “big name” inspirations for you? Can you recommend two authors or illustrators from the indie or up-and-coming scene as well?

Joss Whedon and Garth Ennis come to mind as inspirations. Whedon has an incredible talent for emotionally resonating drama and charismatic characters. Ennis writes brilliant dialogue and isn’t afraid to make his stories complex and cerebral. At the same time, he has a dark, twisted sense of humor that I relate to.

When it comes to the indie scene, there a several creators I feel necessary to point out. First would be writer Kristopher White and his book ‘The Thirty Six’ (The36.net) which tells the Kabbalistic legend of thirty six individuals who hold the fate of the world in their hands. Another exciting indie book out there that is just getting started is ‘Dead Future King’ (deadfutureking.com.) written and illustrated by David Flores which focuses on King Arthur being resurrected into a zombie apocalypse set in current times. Finally, I have to give a shout out to my buddies, Sebastian Kadlecik, John Bring, and Lindsay Calhoon who run JBSK comics and put out a fantastic and hilarious book called ‘Penguins vs. Possums’ (penguinsvspossums.com). All three of them take part in the writing, and both John and Sebastian do the artwork for the book. They even asked me to contribute a ‘Penguins vs. Possums’ pinup to their upcoming issue, which will be released at WonderCon this year. I would definitely recommend checking them out.

What projects can we expect to see from you in the future? Do any of them re-visit ideas and concepts from Identity Thief?

Well, given my tastes, I’m pretty confident that this won’t be the last horror piece I write. In fact, I have a ten-page story called ‘Buried’ that will be included in the upcoming horror anthology, ‘Skin Crawling Comics.’ That story was illustrated by Chris Thorne (christhorneart.info) who does a lot of sketch card work and also provided some art for ‘The Thirty Six.’ You can find ‘Skin Crawling Comics’ on Facebook (facebook.com/skincrawlingcomics).

We also have a completely new story coming from Fanboy Comics this year which is called ‘The Arcs.’ The story is about the last of Heaven’s archangels fighting a losing war against Hell’s armies after God has abandoned them. It’s written by Michael D. Poisson and features the artwork of Matt Jacobs. I think Michael and Matt have done some amazing work with this story, and it’s going to be a really exciting and surprising follow up to ‘Identity Thief.’

Plus, there’s always the possibility of an ‘Identity Thief’ sequel somewhere down the road …

The Identity Thief and Bryant Dillon of Fanboy Comics

Geek Stuff I’ve got a bad feeling about this…