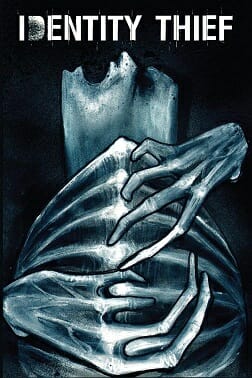 ‘Identity Thief’is the second graphic novel from Fanboy Comics, written by co-founder Bryant Dillon with art by Meaghan O’Keefe. It follows Craig, a man who has moved across the US to be with his long-distance girlfriend, Daphne and escape certain “troubles” back home. Unfortunately their new apartment has an existing, inhuman tenant.

The book itself reads like a good episode of the Twilght Zone. We’re quickly introduced to the characters and the situation and as we go along, we find parallels between the human characters and the other. That said it’s hard to call either Craig or Daphne “protagonists” in the traditional sense. They neither really act, or react to the presence until it’s too late, and the reveal of the troubles from Craig’s past make him an ironic target for this particular monster. 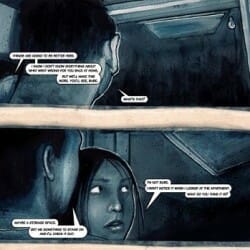 Despite it’s 64 pages, ‘Identity Thief’ is a brisk read. The dialogue is solid, offering insight into the characters without much in the way of idle banter and no real attempt at exposition. This is something I wish more modern comics writers would take to heart. If a word balloon’s covering up half the art, then there’s no point in the art being there. Speaking of which, I found myself intrigued by Meaghan O’Keefe’s art style. Her thick, loose line seems deceptively simple at first, but it evolves into something darker and more impressionistic as the story progresses and the tension ratchets up. Definite elements of late 80s/ early 90s Vertigo about her work. 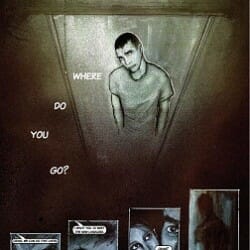 Ultimately, I can reccomend this to anyone who wants a horror comic that’s markedly different to the standard vampire or zombie fare. I’m looking forward to what Fanboy do next. You can grab a copy here. 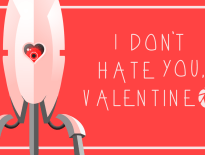 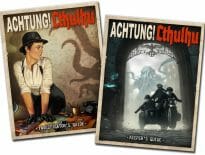