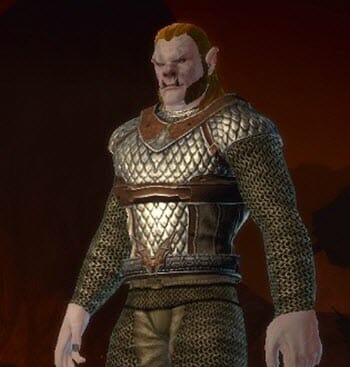 So as I mentioned in Friday’s post, I spent this weekend blasting through the Neverwinter MMO beta. I’d like to thank Andrew for hooking me up with access to the Press beta and my better half for understanding that this weekend I would be here in body only. Over the course of the weekend I levelled one main character to within spitting distance of level 22 and had a look at three of the other four classes the game offers at launch. I think I got a decent feel for the game, at low levels at least.

First thing to get out of the way: this game is not a World of Warcraft clone. Whilst it definitely borrows WoW’s third person over-the-shoulder camera, almost every other aspect of the game reminds me of and action RPG like Diablo 3 or Dragon Age 2.

The first thing you need to do is create a character. Neverwinter has most of the classic D&D races available for you to choose from: Human, Halfling, Half-Elf, Half-Orc, Wood Elf, Dwarf and Teifling. Also people who buy the $199 Founders Pack also get access to the “Menzoberranzan Renegade” race (that’s Dark Elf to you and me) although I assume that will become available in-game for a modest fee later on.

“Your choice in class affects what powers you gain access to and what gear you can equip.”

At launch, there are five classes available, with the promise of more later on. They are Guardian Fighter (sword-and-shield wielding tank), Great Weapon Fighter (greatsword-wielding damage dealer), Trickster Rogue (twin dagger-wielding damage dealer), Devoted Cleric (healer with damaging spells) and Control Wizard (caster with crowd control options). Your choice in class affects what powers you gain access to and what gear you can equip. There’s very little overlap between classes. As a Great Weapon Fighter (GWF from hereon out for sanity’s sake), I generally found myself unable to equip gear intended for the Guardian Fighter.

As with a lot of ARPGs, your main attacks (or At-Will Powers as they’re called, following the convention set in D&D 4th Edition) are mapped to the left and right mouse buttons, whilst you have up to three “Encounter Powers” on a 10-20 second cooldown mapped to the Q,E and R keys. Finally you have the “Daily Powers”, mapped to 1 and 2, which are activated by spending Action Points (AP) from a big D20-shaped meter in the middle of your UI. 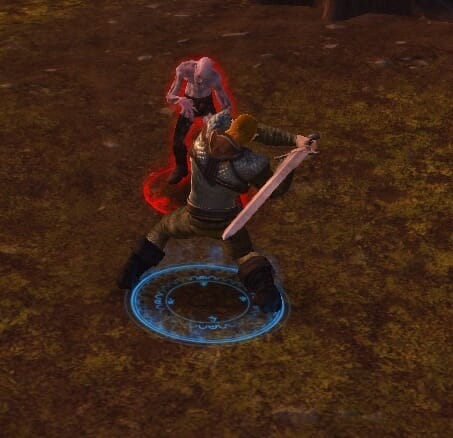 Combat’s pretty straightforward, move in range, press the relevant attack button and you hit whatever’s in your targeting reticule. As befits an Action RPG there’s no auto-attack, but holding down the mouse button will cause your at will to be continuously used, and some powers do extra damage if used in this manner.

The GWF ‘s attacks tend to “cleave” to other enemies in front of him, although I believe most of the classes have some way to deal with groups. If there’s one big tip I can give anyone it’s keep your weapon upgraded. At level 15 I started a series of level 17 quests that frankly kicked my arse to heck and back. Checking my character I noticed that my weapon was a level 11 quest reward. After making a quick search of the weapon vendors at the Enclave for something more appropriate I went back and the quest, whilst still challenging, was at least manageable. 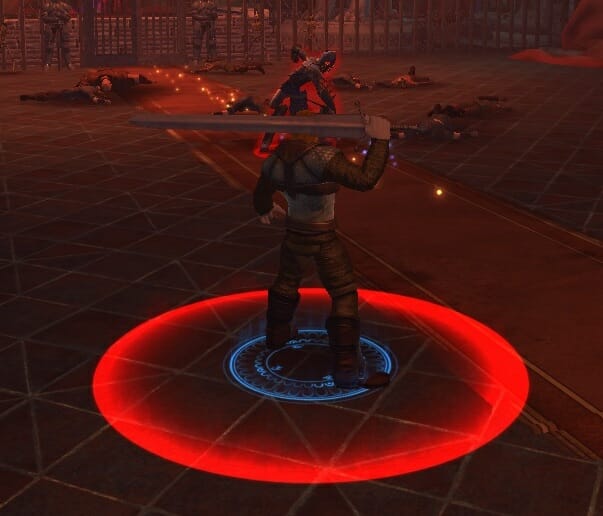 Healing works in a similar way to combat, with the cleric needing to point his targeting reticule at the person he wants to heal. I imagine this will get… interesting in a frenetic group situation, but it does mean that the Cleric needs to develop a lot more battleground awareness than some games where they spend more time watching the party UI.

Out in the World

All of these concepts are introduced in a step-by-step manner in the initial quest line which takes your character up to level 4 and deposits you in the main quest hub: Protector’s Enclave. The quests themselves follow the standard MMO trifecta: “Kill 10 X“, “Collect 10 X bits” or “Save Y from the X“, but unlike a lot of MMOs, you rarely have more than two or three at any given time. I think the most objectives I had to track was four, all in the same general area. 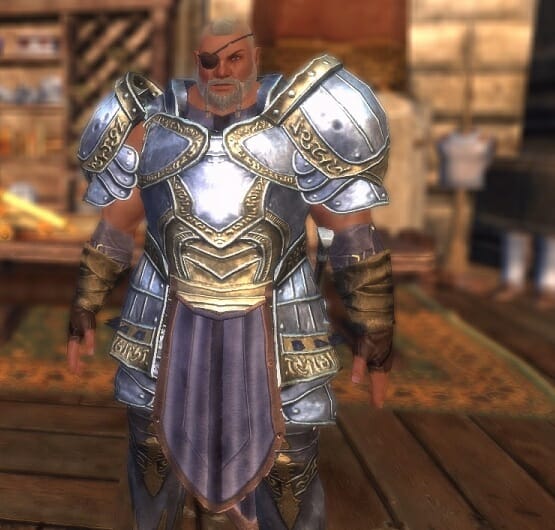 Instead of a massive, sprawling world of interconnected zones like some MMOs, in Neverwinter each quest area is a self-contained zone. The outdoors areas are shared by you and other players whilst interior areas are largely limited to you and those in your party. In the beta weekend there were just enough people in each zone to make it feel like you were playing with others, but not enough so you were fighting each other for questing targets. I only became aware of a massive crowd of players whenever I went back to Protector’s Enclave.

My biggest gripe with the world structure was the lack of any “fast travel” option. Often, after fighting my way across the zone, my next quest would take me back to Protector’s Enclave, which necessitated me running all the way back to the beginning of the zone to get back to the world map.

As well as quests there’s group content in the form of Skirmishes and Dungeons. Skirmishes are small-scale 15-minute quests that require a 5-man party. The two I managed to do in the Beta both followed the same format: kill waves of increasingly-tougher enemies until the boss appears and then kill him. Dungeons are a different beast and require a time commitment somewhere in the region of 45 minutes to complete. 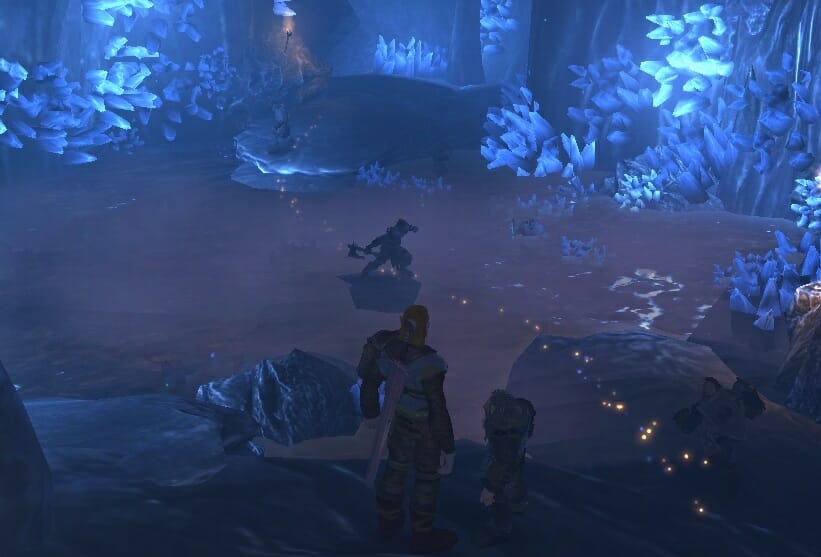 The one area of content I didn’t really get the chance to explore was The Foundry, which I believe will be the heart of Neverwinter’s longevity. The Foundry is a toolkit which lets users design their own instanced quests for other players to run. In doing so Neverwinter has potential access to an unlimited amount of content with minimal developer support. I ran a few during the weekend, and, whilst the quality varies, it’s a nice break from doing the exact same quests over again on a second or third character. Sadly when I tried to create my own meatgrinder for unsuspecting n00bs I came across an error which I haven’t found a way around yet. 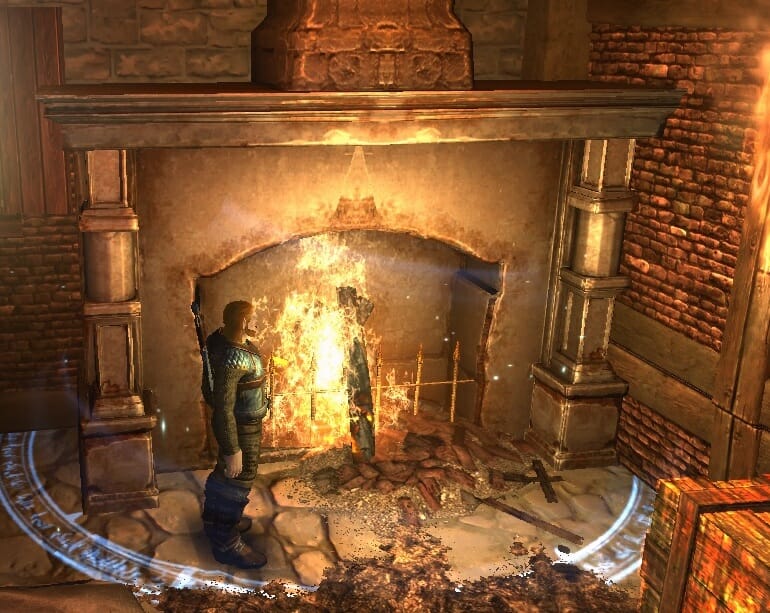 One final gripe I should mention are the graphics, because it’s one thing I’ve seen other people complain about. Personally I don’t go into an MMO looking for high-end graphics, but there’s no denying a lot of the textures look about 5-6 years old. That said they’re perfectly functional to my mind and far from a deal breaker.

Neverwinter is Free To Play, the only investment required to play is the time it takes to download a 3gb client. Once you hit level 10 in-game you’ll be able to start earning a currency called Astral Diamonds. Basically every hour of play time you can invoke your character’s god, which will usually give you a small buff and some Astral Diamonds, which can be saved and then used to buy goods in game. You can even trade them at the in-game auction house for Zenn, the microtransactable currency used in Neverwinter and other Perfect World games. You don’t *have* to spend a penny to get anything you want but if you don’t have the time and do have the disposable income then you can just buy Zenn (which starts at 5 euros for 540) and get your shineys that way. It’s a design I approve of as someone who works full time and doesn’t necessarily have the time/inclination for the grind.

“I’m definitely going to give it a go…”

I really enjoyed the beta weekend. I think Neverwinter’s a fun game with enough of the Neverwinter Nights character and Dungeons & Dragons feel to be interesting to a devotee of the series without being beholden to it. I’m definitely going to give it a go with my better half when it goes live. I doubt it’ll win any new converts to the MMO cause, but if you’re looking for a fun distraction, you could do worse than give it a go. Won’t cost you a penny!

your review is terrible. It provides nearly no insight, all i read about is useless rambling. seriously man, look at how other people review games.

Don’t encourage herd mentality. There is veteran insight in this review and the argument “other people do it differently” is generally a poor one.

This was a review of my entirely subjective experiences sinking around 30 hours into it over the course of the weekend. I can’t speak for how professional reviewers do it, but I figured my best shot was to speak candidly about my experiences as a long-time player of MMOs.

If you have constructive feedback, I’d love to hear it.

Seems a good review to me – it tells me most of what I want to know about the game. The game is new, so nobody knows anything about balance or high-level play, and any reviewer claiming to is lying.

Thanks, I’m a blogger, not a reviewer so I tend to approach things from a more subjective viewpoint.

In addition, try adding a Pro’s and Con’s section into future reviews. It’s nice for people who think bulky reviews are tl;dr like myself. It also forces the reviewer to pull out clear-cut opinions on topics. To be honest it felt more like a description of the game rather than a review. Also after reading a review a gamer should have a good idea if the game is up to snuff or not, this review left me still in the dark.

i want a description of the game. Pros and Cons are always subjective to the reviewers POV and therefore pretty useless to everyone else.

i guess I want a long description from someone who knows the game but also a summary box too. don’t need a yes/no verdict, stars, Pros, Cons, thumbs up, thumbs down or any of that rot.

Thanks for the feedback, I’ll try and bear that in mind for the future. I’ll also see if I can write up and pros and cons section for this article later.

In the meantime, my tl;dr review is it’s absolutely worth checking out if you like the gameplay of games like Dragon Age or Diablo 3. The graphics are pretty far from the cutting edge and it lacks the open world feel of WoW, but there’s always something to do and the Foundry provides a potentially infinite amount of additional content.

Seriously the review is fine. Don’t be negative!

Thanks for the review. All I needed to know.