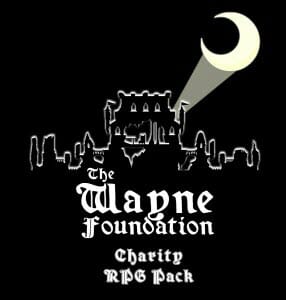 Troll in the Corner have released their third annual The Wayne Foundation Charity RPG Bundle.

The Wayne Foundation is a charity committed to spreading awareness of the commercial sexual exploitation of children and the rehabilitation of domestic minor sexual trafficking. In essence they work hard to get help to child sex workers.

The bundle only costs $25 and contains over $200 worth of artwork, fiction and RPG products. Among the many titles the bundle includesl 6d6 Shootouts, Azamar RPG, d6 Magazine Issues 1 through to 5, Edge Role Playing Game, Fantasy Core Rulebook (Lite Edition), Martial Flavor, Mistrunner RPG and others.

Bundles from Drivethru RPG are many individual products delivered in a series. I’ve seem some gamers get slightly spooked by this but don’t be. Equally, it does mean that you become a customer of all the publishers involved but think of that as helping the industry and rewarding those publishers who are giving away their games for free or hugely discounted prizes.