You are here: Home / GameWyrd / Echoes from the Wyrd / Dominic Covey and Chris Davis e-View | Echoes #9

Dominic Covey and Chris Davis are key authors for the forthcoming Darwin’s World 2 post-apocalyptic d20 RPG. RPGObjects has been one of the pioneers of PDF publishing and one of the first to see their PDF product as a print product. GameWyrd’s questions appear in strange blue, Chris and Dominic answer in typical black.

Dominic: Darwin’s World 2 is really a compilation of all the lessons we’ve learned since releasing our first edition of the game, taking in a lot of the feedback of our fans, reviewers, and from our own playtesting. The game has changed in a lot of ways, and all for the better. The biggest development has been a total shift to the mechanics of the d20 Modern system, which I personally think has benefited the game tremendously. The Modern system just seems to fit the post apocalyptic setting seamlessly, painlessly clearing up many earlier rules issues.

Chris: Darwin’s World 2 is a revisions and expansion. We original intended to do some expansion books for DW 1, but the releases of d20 Modern change that. There were several key game mechanics that were handled better in d20 modern than what we created in DW 1 (such as firearms and vehicle combat). So at that point it made more sense to simply do a new addition and include the expansion ideas in the new editions.

2) What inspired you to do Darwin’s World 2?

Dominic: Mainly the support and enthusiasm of the gaming community, as well as their continued feedback. The comments of DW players helped us figure out what was good, what was wrong, and what needed to change. I think doing a second edition was the best way to address everyone’s needs.

Chris: A desire to make the best PA d20 rules available. We feel very passionate about Darwin’s World and the PA setting in general. Darwin’s World 1 was our first book, and like most companies, we have improved with each new release. So we really want to go back and improve things.

3) Can we expect Darwin’s World 2 to follow RPGObjects usual release strategy of ebook followed by a print edition? Do people who buy the PDF get a discounted print copy?

Dominic: I believe it will be released as an ebook first. After a few months we’ll hopefully get more suggestions and comments to fine tune it before releasing in print.

Chris: We will always do things in PDF first. I love PDFs and love the process of tweaking and expanding books based on customer feedback. People will always get a discounted “upgrade” price when the books get combined and printed, mostly likely in a hardback.

4) Is it true that there are going to be more “core” Darwin’s World 2 books? Why’s that? Doesn’t it just force the public to spend more money to play the game?

Chris: There will be 2 core PDFs. The division is just a way to package the large book. The new edition could be over 300 pages. I don’t think people want a 300 page PDF. Also, it allows use to get the main player rules out there (classes, mutations, feats, equipment) and get feedback while we continue to work on the game master and setting rules.

5) RPGObject’s webpage is different from other PDF RPG publishers in that you’ve got the RPGHost menu bar across the top. That’s the same menu bar that links into the dominant RPGNow. How much of an advantage do you think that has been?

Chris: Well anytime you can get some marketing advantaged it’s a huge plus. Sadly, good sales are often tied to marketing and advertising rather than quality. So it’s important to have that resource to help get the word out on our books.

Dominic: Our first edition had to be built from the ground up, adapting the fantasy-based rules of d20 to a futuristic setting. That posed a lot of challenges, and our solutions were sometimes a bit rough. But with the second edition using a very solid set of mechanics (d20 Modern) it has been a lot easier to make the pieces fit – and a lot more fun.

Chris: Well, the main difference is that the writing and game mechanics have come from both multiple sources. Darwin’s World 1 was predominantly Dominic’s writing and my editing. Darwin’s World 2 has major contributions from myself and Charles Rice, and we had a fair number of play testers and editing support.

7) If you could get anyone to write material for Darwin’s World, who would it be?

Dominic: I think we have the perfect team already. Charles Rice is talented, creative, and enthusiastic, and has been a strong supporter of DW even before coming on board to work on DW 2. He’s done some great work for his own game “Vigilance”, and also with “Blood and Space” and now Darwin’s World 2. Chris Davis has the skills to put everything together and make it all look right – and the patience to take in everyone’s comments, criticisms, and suggestions and work them in. And his writing (and grasp of the d20 Modern rules) is top knotch. For me it’s all about a lifelong obsession with the post-apoc genre, so writing is as fun as playing as far as I’m concerned. I think in the end our combined dedication to the game will show through and make it an outstanding product.

Chris: Monte Cook. He did a review of DW 1 and always wondered what a Monte Cook Darwin’s World adventure would consist of.

8) What do you see yourself doing in five years time? Still writing for and supporting Darwin’s World?

Dominic: That’s a good question. Hopefully we’ll still be putting out adventures and sourcebooks for DW, so long as the interest is still there.

Chris: I hope to see a larger line of Darwin’s World products, including miniature, strategy, board, and computer games. It has always been my ultimate goal. We already have a Darwin’s World miniature game that we haven’t official announced. Also, we should be on Darwin’s World 5th edition by then. :) jk

9) If you could take something back, pretend it never happened, what would you do differently about Darwin’s World?

Dominic: I think a professional product should always be given a thorough examination by its proofreaders. Our first release of DW was still pretty “rough” when we released it, and hearing about the numerous typos and formatting errors was a bit embarrassing. That’s something I wish never happened :)

Chris: I would have expanded it more before printing. I would have included terrors and metal gods in the core book as well as made it a hard cover.

10) What advice would you give to anyone considering taking the PDF RPG route?

Chris: Make sure you do your best to promote your game. Make a website and updated it as much as you can. Don’t just create a product and toss it on rpgnow.com. That will not work in most cases. You need to spend as much time getting the word out as you do creating the product.

(GameWyrd notes – We’re in the Out of the Box section now. A couple of unusual questions for which we expect unusual answers!)

11) Imagine a strangely accented man with oddly coloured eyes thrust a battered and torn scroll at you, explained that it was of utmost importance that you read the words of the scroll from the top of the nearby hill during tomorrow’s dawn and then he then ran off before you could ask him anything else. Would you read the scroll on the hill at dawn?

Dominic: Hmm. I’d sneak a peek first before reading it, just in case the scroll said something like “Okay, Lord, come and take me now!”

Chris: I’m a sucker. I would be on the hill at dawn.

12) You just happen to find and open an old bottle. A genie pops out and reassures you that it’s an entirely honest genie and won’t pervert your wishes, of which you have three, at all. What do you dare wish for first?

Dominic: I’d wish for world peace, followed by giving myself god-like powers. Who wouldn’t? But I’d save the last wish just in case.

Chris: I would wish for mass space travel. I have a life long desire to go to space before I die. It does not look so good at the moment, but I still got a few decades left. Go space program! 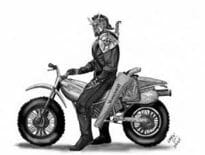