You are here: Home / GameWyrd / Echoes from the Wyrd / RPG Previews: Morningstar | Echoes #13

An 22-paged Morningstar preview can be downloaded at the end of this page. The following text and illustrations are only a small example.

You hold in your hands the gateway to Thraxis, the world of Morningstar. On the other side lies a world of eldritch magic, primeval races, and diverse imperial cultures at the height of their achievements, where a dark Prophesy has begun to uncoil. This is a world that never fell from grace and that continues to meet its highest potential. Immortal elves have retained their fey natures; the dwarves maintain a flourishing empire, wielding powers over earth and stone. These and other races are still vital; humanity has not yet pushed them into retreat. There are spirits in the land, water and sky. Places of power are everywhere, regions where certain magics have greater or lesser effect, which can be exploited to create workings impossible anywhere else. Wondrous treasures wait to be won from the gods in legend-making adventures, and heroes perform mythic deeds in the name of glory… in the name of Empire.

The world is awash in magic, but its nature is such that it promotes large-scale undertakings in addition to personal power. The nine empires are virile, and everything is being discovered for the first time. Great and daring undertakings are funded, trade is strong, and the exchange of ideas creates prosperity for all concerned.

Art and culture are at their peak. Nine empires coexist in relative peace except for minor skirmishes that are not officially recognized. They trade with one another for mutual benefit. This prosperity has allowed for the construction of universities, monuments, and religious and civic buildings of breathtaking grandiosity, and for the development of an astounding way of life. Though far from idyllic, a citizen’s life is reasonably stable. It is an age of wonders, where anything can be done for the right price, though this price is not always monetary. 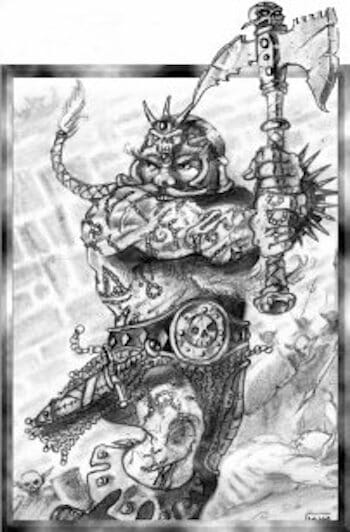 Magic is the force that drives civilization toward its greatest potential in Morningstar. It is a fantastic time to be alive. The spirit of magical exploration pervades this world and the limits of possibility know no bounds. In the Brendirian province of Triskatariot, the creation of constructs has been raised to a high art. Olive groves are tended by golems, ornithopters wheel in the sky, and construct-vehicles carry troops on land and sea to battle. Ijamvians gain the element of surprise with ingenious and deadly mechanisms, such as the spring-loaded viper clamp, used as a grapnel in close combat. Sacred hot air balloons carry paying supplicants from Haseth closer to their gods, while Latoman gliders wheel in the skies of Quetapan.

Thraxis is a world of grandeur and beauty, both natural and architectural. Civilization seeks to match the beauty of creation in its own works, harnessing the magic of the world to erect monuments built to stand forever. In Brendir, columns and arches tower over the people, holding up multi-tiered temples and civic buildings. In Kenabu, giant turtles ferry citizens along the banks of obelisk-lined waterways. The gnomes of Gimmun Gibuldigapp display their technical mastery with an entire city that rotates, whirs, and chimes with clock-like precision.

Magic is a living energy on Thraxis, the result of planar emanations that attract, repel, and destroy one another. These planar emanations suffuse the land and its life forms. These flows concentrate in certain places of power, creating areas tied to the phenomena of the plane or planes from which the energies derive. These areas range in size from a single plot of land to entire empires. These places of power are self-reinforcing; they are created by large congregations of similar beings, and when formed they strengthen those beings, causing more of the same types of creatures to seek them out, for the easy life they offer. This is why Brendir is lawfully inclined and positively charged, and Zeikrus, the draconic empire, is chaotic and in a state of eternal civil war. Smaller pockets are usually much more concentrated than those of the larger area they lie within. The shrine at Nepri, in Hasem-Bura, where desire becomes matter, is one such place. Spellcasters find some of their spells are more powerful, or weaker, in the most strongly-aligned areas. Great acts of daring that would be foolhardy in some areas are a matter of course in others. In the Triskatariot region of Brendir, machines rarely break down inconveniently, while they are much more prone to collapse in the primeval forests of Ynnidon.

Those Who Seek Power

Malevolent forces are stirring, hoping to tame the energies that have raised Thraxis so high, and to recast her in their own perverse images. Chaos is growing, and beings from the odd angles of reality are invading, bringing their eternal wars with them. A bizarre race of outsiders has recently come to the world, called by interested parties. Known only as the Strangers, these sophisticated beings are helping to undermine the fabric of society and to create strife between nations.

Gods can be forged here, and beings from all over the multiverse are becoming aware of that fact. Strange cults rise and fall, as these and other gods lay their claims in the hearts and mind of the peoples of Thraxis.

Men and gods struggle with fate, locked in a battle for the fate of Morningstar. At stake is the key to all the power in the cosmos. Thraxis attracts planar power, concentrating it to a strength that is not even possible on its plane of origin. The newcomers are learning a valuable, and potentially deadly lesson: he who controls Thraxis, controls the multiverse.

On Thraxis, magic made a perfect world. Almost. There is a price for everything, and it is becoming apparent that the abuse of magic on Thraxis cannot be sustained indefinitely. A dark Prophesy, called the Canticle of the Morning Star, is unfolding. It speaks of the end of the great civilizations, and the prices each must pay for their arrogance. Its verses number in the tens of thousands, and each time it is thwarted, it adapts. Verses restructure themselves in the unholy texts, and a new route to destruction is plotted. None know its origin, but all respect its predictions, whether they seek to prevent them or to enable them. It is not entirely certain whether the Canticle seeks to bring the end about, or merely serves as a warning. One thing is certain; Thraxis is under siege from every direction, and by an inscrutable and faceless foe.

The world itself is a threat to the existence of civilization. Thraxis and her massive terraqueous moon have long existed in a state of perfect balance. Now, Arril’s orbit is disturbed, creating great tides and earthquakes. Most of the time, the world’s many tectonic plates disperse the stress, but with certain eccentricities of orbit come devastating earthquakes. Fierce elemental storms sometimes ravage the land as Thraxis seeks to fight the cancer that is springing up within her.

Deep underground lurk great and terrible civilizations as old as the world, which resent the encroachments of surface folk. Conflict so far has been mostly attrition, but with the increased mining that prosperity brings, full-scale war can’t be far off. While most of the underground realms are bolstered with magic and centered within the established tectonic plates, with the most extreme upheavals deep-dwelling creatures can be forced to escape to the surface.

These and other threats are larger than any one person, but there is always a chance to make an indelible mark on history. Morningstar is a world of heroes, villains, and conflicts writ large across the pages of a history that is still being made, where there is still a chance to make a difference. Thraxis has all the makings of a gilded paradise, or of the darkest hell. Which it becomes depends on the bold people of the world, who dare to take the reins of fate and wrestle them into submission. The need for heroes is becoming dire. Will you be counted among them?

Morningstar is a versatile setting, filled with possibility for any style of campaign. There’s a lot to explore, since campaigns can be set in any part of the nine empires with varying degrees of effort. Morningstar is a setting that allows for adventures and stories that could happen nowhere else. 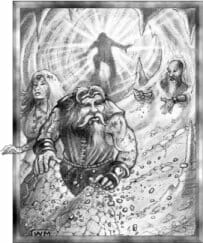 From the oppressive silence of the sand-swept temples of Kula Kor (home of the iguana-priests) to the abandoned sacrificial altars of Quetapan (soaked with the ancient blood of kings who wait for a chance at revenge), there are lost areas ripe for exploration by those willing to forgo the safety of civilized life. Even city life is filled to overflowing with the possibility for adventure: the commotion of the crime-ridden port city of Klephas, or the city of dementia in Xiangur. Soar with dragons in the endless blue sky of Zeikrus, a place of brutality and chaos. Find your destiny in the Hall of Moments, deep within the jungles of Western Min Geng. Find intrigue and mystery in the Brendirian senate. Become a general, an archmage, or hero of legend, command fanciful machines into battle, or become the first Emperor of Brendir. The world is yours to shape, and to remake in your own image. Wield this responsibility wisely.

A Different Path
Morningstar is based upon the paradigm of an ancient world that met its highest potential. Its great empires never fell, never encountered feudalism, and never suffered an age of darkness. It is in the process of continuing through to what would be the renaissance on a medieval-styled world. You won’t find kings and queens, peasants and chivalrous knights. Instead, there are Emperors and Empresses, humble citizens, and bold heroes.
Different Dragons
Thraxian dragons each have their own colorations, and individual appearances, so it is not possible to tell from mere appearance what type of dragon one faces. The power descriptions and types from the MM still apply, tied to habitat, behavior, and alignment, so it is still useful to describe these dragons by the terms “metallic” and “chromatic.” For the sake of easy reference, all references to dragons in this and future Morningstar materials will also use the dragon types listed in the MM when describing the stats of a particular dragon. Keep in mind, however, that a red-colored dragon is not always a “red dragon” on Thraxis.
Different Faith
There is no single unifying pantheon on this world. Each culture has its own religion and pantheons, whose gods are usually beyond the reach of mere mortals, dwelling not on another plane or some pseudophysical realm. They are what they should be – gods. Characters are less likely to follow the standard fantasy model which assumes the character worships and promotes the ideals of a single god. Instead, most people of the world follow a religion of several gods, more so than being vassals of a single deity or set of ideals. Of course there are cults, sects and orders that revere a single god, but these also exist within the framework of a culture and religion. Their myths and values are reflected in their daily life.