You are here: Home / GameWyrd / Echoes from the Wyrd / RPG Previews: The Hamlet of Thumble | Echoes #13

The Hamlet of Thumble

Thumble has long been a quiet and peaceful halfling settlement located on the east side of the River Noddon. Most of the inhabitants are gardeners who rely on growing fruits, vegetables, and flowers to sell to merchants traveling to Grouton. These merchants arrive by bridge. They stop to sell some of their wares before moving on to Grouton and elsewhere in the Kingdom of Calas. Most do not stay here long because Thumble has only one bed and breakfast. Also, the halflings live modestly. Therefore, they cannot afford to buy much, though they would like to.

The halflings settled in Thumble about 80 years ago. They were invited by the king of Calas to help guard the border against Dunmar. A small group of stout halfling warriors and their families arrived under the promise of free land, little taxation, and a great deal of autonomy. Fortunately, there has been no real conflict, and the halflings became complacent over time.

The residents of Thumble live self-sufficiently and have found life generally peaceful and prosperous. Most of the residents engage in barter exchange. Neighborly trading of pies for woodwork is a common sight. There is virtually no market for items priced above 100 gp. Only one of the halflings, Old Roplin, remembers the early years when they first arrived. The others only know of good times and have a carefree attitude.

The Ecology of the Halfling

Halfings love children and because their gestation periods are much shorter than larger people, they tend to have many. There is also a high rate of twin or, even, triplet births among halflings. They are very proud of their many offspring and wonder why other people do not have as many. It is common to find a halfling family of 15 or more children in rural settlements. The children help out on the farm and with chores around the house.

Halfling households also tend to be large because extended family members often live under the same roof. Their sense of family and community is very strong, and, when times are tough, halflings work together as a community to overcome obstacles. Individualism is not as valued as the welfare of the group. Even if a halfling is lazy or does not want to work, the family or community looks after him. That is the main reason why extreme poverty is nearly non-existent in most halfling settlements. Any homeless halfling is one that refuses aid from his fellow halflings.

Halflings enjoy good food and drink; however, diligence and persistence are highly valued. They are not as serious though as some other people, such as the dwarves. Halflings are known for their good-hearted sense of humor and joy for life. They firmly believe in the balance between people and nature and have a deep respect for the woods, even though they spend most of their time in their gardens or on their farms. Most halflings are not very religious, and many small communities do not even keep a spiritual leader or place of worship.

Everything exists in moderation for halflings, which promotes a somewhat conservative culture. As a result, adventurers are few and far between and those that do leave are often considered outcasts or misfits–that is until they come back with riches from their journeys! Because of their communal nature, halflings always expect others to share their wealth and are expected to do the same when they come upon some coin. There is little sense of privacy among halflings and gossiping is almost considered a sport for them. Sometimes, this constant sharing promotes a sense of selfishness and greed among certain halflings. A deep sense of curiosity and propensity toward collecting items encourages some halflings to hide and hoard objects of value such as gems, jewelry, antiques, or books. 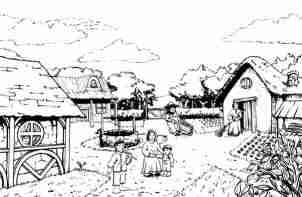 Halflings get along with most other people and easily warm up to strangers, if they appear to have good intentions. Often, visitors are invited into homes to stay for the night. Though they tend to migrate more than other peoples (often because they are chased out by stronger forces), halflings settle in quickly and even forget anywhere else could have possibly been their home.

There is a trusting nature to halflings and they usually rely on other people to protect them. Physically smaller and weaker compared to others, they are generally peaceful and try to seek protection from the stronger world of men in return for taxes and/or allegiance. Many humans view them as child-like in some ways.

Mentally, they can overcome their fears during the most desperate moments. Though fearful of many things, when pressed into a dangerous situation, a halfling reacts quickly and adeptly. They are also good at adapting to change, though deep down they stick to the following fundamental values: diligence, honesty, and good will toward others.

Many view halflings as kind and caring people, but this is not a genetic trait. Because they usually live in small communities, it is difficult to be mean or rude to another halfling when it is likely they will meet again on the same day. This encourages petty or joking ways to get back at one another, instead of outright conflict. There are few secrets in a halfling settlement. Everyone knows the others’ actions.

There are no known halfling cities or towns, since all halflings live in villages or smaller settlements (hamlets or thorps). The ones that do not, live in cities dominated by other folk.

These halflings tend to speak with a long “o” sound in their words, especially when ending sentences. For example, a Thumble halfling may say something like “I don’t kno-ow.” Though they may sound simple-minded because of this, most are quite bright, some being very quick-witted. Unlike most adventurous halflings, the residents of Thumble are not quite as quick on their feet as they have become accustomed to a sedentary lifestyle.

This is a pleasant little dwelling by the river. A dirt road runs through the middle of the hamlet. The landscape is generally flat. Small one-story cottages are nestled closely together. A female halfling sweeps her doorstep, but stops to look up, a bit surprised, to see who is coming. An older male halfling, pushing a cart full of carrots and beets towards the same house, stops in his tracks to stare at you. Another female halfling, middle-aged, peeps out through her curtained window to see what is happening.

Three very curious halfling children stand together looking at your party. One is a boy about five years old and another is a taller girl about 10 years old. The boy wearing overalls has short black hair in a bowl cut and very plump cheeks. The girl has shoulder-length curly brown-gold hair. Both have bare feet. A bold-looking, handsome eight-year-old halfling boy standing behind them approaches you.

The smaller boy is Borendil’s youngest son, Luco. The girl is his sister Megran. The older boy is Calcyrr’s son, Owecyrr. He approaches the party holding a piece of straw in his hand and says, “Hello, who are you?” The other children look curiously at the adventurers and touch their clothing, armor, or weapons. The halfling children have a good sense of character and, if the party is good-natured, many of the other children will approach the adventurers and follow them around the hamlet.

The halflings do not have a name for the dirt road that runs through the hamlet. The entire settlement is located on the east side of the River Noddon. Most of the buildings with farms or orchards are closer to Leaventhale Forest. If the party is friendly, the children lead them to the hamlet elder, Opeeindy. If the adventurers seem unfriendly, the halfling children take them to the sheriff’s house. 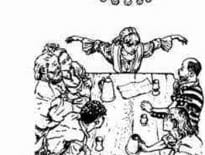