A trending post on Google+ today is a call to arms from William Shatner. The actor, famous for his role as Captain James T. Kirk, is trying to have one of Pluto’s moons officially named “Vulcan”. If successful, Vulcan would orbit Pluto along with a moon called Romulus. 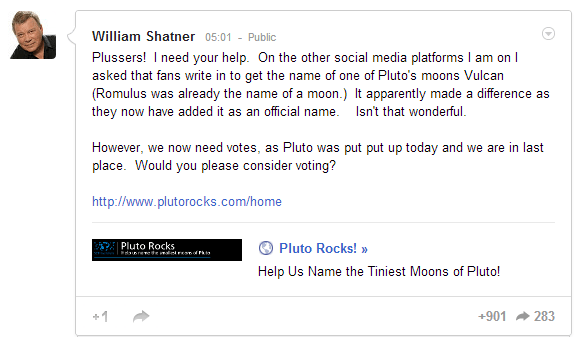 Want to vote? You can do so at PlutoRocks.com, a site set up and operated by SETI.

Vulcan faces competition from Acheron, Alecto, Cerberus, Erebus, Eurydice, Hercules, Hypnos, Lethe, Obol, Orpheus, Persephone and Styx as names. You can see that classic mythology contributes to the names in most cases.

Vulcan, however, was the first addition to the list and placed there just this week after Shatner got involved. In a blog post Mark Showalter wrote;

Mr. Shatner’s second suggestion, Romulus, has a bit of a problem because it is already the name of a moon. Romulus, along with his brother Remus, are the names of the moons of the asteroid 87 Silvia. They were discovered by a team led by my good colleague Franck Marchis, now a senior scientist at the SETI Institute.

So, given there’s already a Vulcan… will you be voting for a second?

The title image is from NASA and shows an artist’s concept of the Pluto system from one of the moons.

Sites Should authors tinker with Conan Doyle’s vis…
💰 Copper Coins 💰 Geek Native is an affiliate and may earn commission on purchases you make from third-party sites.
🍪 Privacy & Cookies 🍪 The site uses cookies to survive. By accessing the site, you agree to use your browser to control cookie use or take 1d4-3 privacy damage (tracking). If you defeat cookies via ad blocking, please consider the Patreon. An intro to cookies, and how to control them, can be found here. I Manage Cookies