You are here: Home / Games / Tabletop & RPGs / Doctor Who: Adventures in Time and Space RPG Review 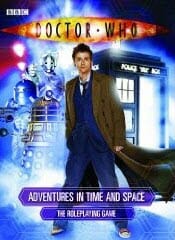 I’ve not written an RPG review in many years but this feels like a special occasion and a reason to return to old bad habits. A about a million years ago (give or take) I threw enough money at a charity auction to win an early copy of the Doctor Who: Adventures in Time and Space RPG that publishers Cubicle 7 kindly auctioned.

It arrived at work today.

The unboxing was a treat. First off; this RPG is a box set, a sturdy seeming coloured box with a flap lid opens up to reveal a bundle of books as well as stack of transparent D6s cunningly placed in the spine.

My thoughts immediately turned to a journal entry I’d read earlier this week from the developer of a forthcoming RPG based on an already very popular computer roleplaying game. This developer had discussed his goals for the game; it needed to be something that would welcome never-roleplayed-before gamers, something that was complete (not a £10 starter pack to a £30 game) and also something that held its own as a serious and significant RPG.

My first impressions of opening the Doctor Who game was that Cubicle 7, under the helpful gaze of the BBC (the BBC logo appears on the box), had succeeded in creating a welcoming game.

The box set contains everything you’d expect; the player’s guide, the gamemaster guide, die, an adventure book and some character sheets. In fact the boxes contains more than some gamers might expect as it also holds pop-out tokens for story points and for items. 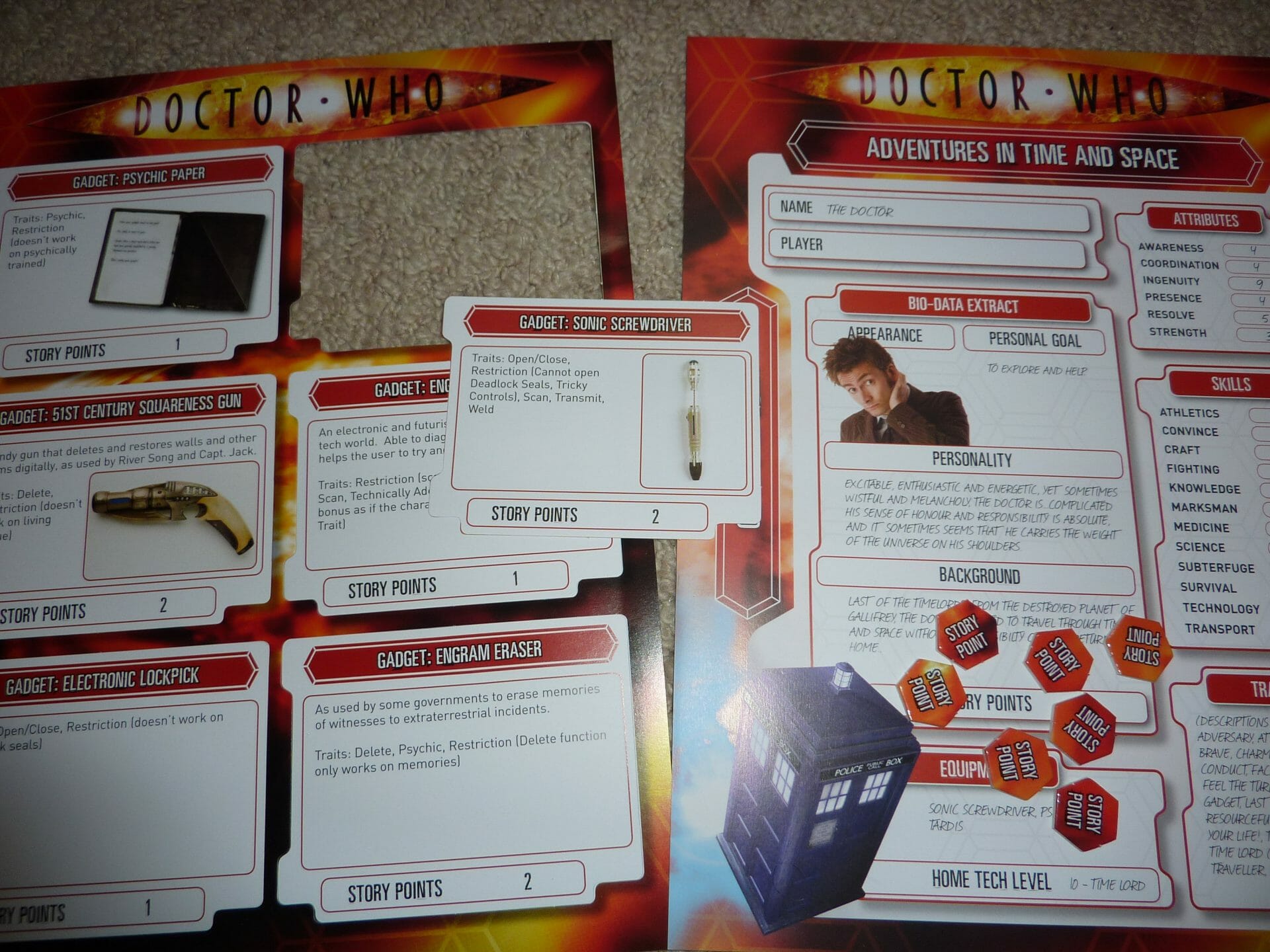 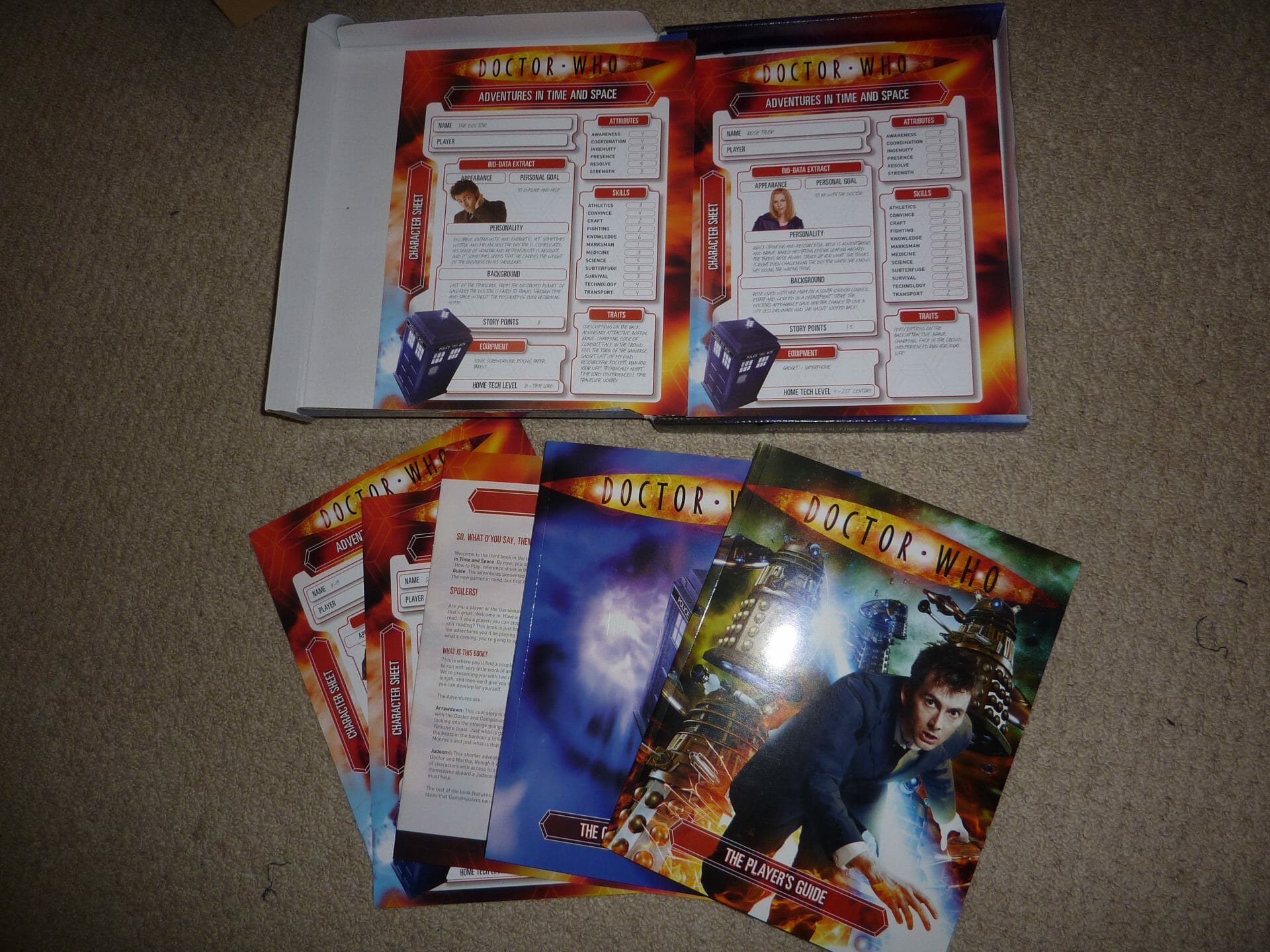 It’s easy to get a “board game” vibe from Adventures in Time and Space. One of the handout tip sheets addresses this in case some first timers were really expecting a board. I think this is actually the right feel for the game – it’ll help families get to grasp with it. If this RPG helps inject some new blood into the hobby then it’ll be a good thing and I think it might be successful there.

The game system itself is old school. The mechanics are a basic attribute plus skill plus 2d6 to determine a result number. This may be an old style but I actually think it works – its familiar enough for gamers like me to recognise or even adapt and yet simple enough for rookies.

The game comes with numerous pop-out “story point” tokens. Making these tactile is another way to make the game more understandable for newcomers – in effect you’re trying to win these. At the same time the concept of a storytelling currency is one that’s explored with enthusiasm in the academic indie roleplaying scene.

Character creation is point based. This is my preferred way of doing things as it means I get to craft the character into the shape I want. While this may be a challenge for the new comers I feel the collection of pre-genned sheets come in handy. If you don’t want (or can’t cope with) creating a character from scratch you can pick from one of the TV characters. You could be Rose, Micky or one of the many others. You could play the Doctor himself.

This, I feel, is my biggest concern with the Doctor Who roleplaying game. This isn’t a comment restricted to Adventures in Time and Space. This is a concern I’ve had for all homebrew and proposed Dr Who RPGs. What’s the point in having a Doctor Who RPG without the Doctor? What’s the point in the group game if only one person gets to be the Doctor? It’s not about ‘power’ or ‘prestige’ or playing the Doctor – it’s my belief that gaming is a collaborative group effort. Characters may be more powerful than other characters but the story should shine the spotlight on them all equally.

To be honest I don’t think Adventures in Time and Space does anything to address these concerns.

However; I think the ‘New Who’ style pioneered by Russell T Davies has addressed these concerns.

Let’s be clear; Adventures and Time and Space is a game that oozes David Tennant’s Doctor. It’s his pictures that are used throughout the books (and hats off to the layout team).

It’s my feeling that the David Tennant Doctor Who series is one in which the camera’s and plot attention is spread more equally along the characters. Captain Jack, Rose and the others are significant in their own right. Arguably they’re not as significant as the Doctor but this Whovian feels that the style does better fit an RPG.

The game itself addresses this. You can play the Doctor – I have his stats! – but you don’t have to. You could do a Unit game, for example. You could do your own spinoff and do some time police action. There’s probably legal or licensing reasons why the game doesn’t urge readers more strongly that they could do their own version of Torchwood with these rules. But they could.

This is a review that’s been written before I’ve had the chance to play the game. Many gamers will dismiss the review out of hand for that. Fair enough, that’s their call but I feel this game is a special case. It isn’t just because this is the Doctor Who game but because it feels as if I have played the game. I know Doctor Who so well. This box set welcomes me so warmly and the rules are so familiar. What’s not to know?

This post was mentioned on Twitter by GeekNative: Doctor Who: Adventures in Time and Space RPG Review http://goo.gl/fb/3qcH…

Would you ever go back to being Doctor Who

Doctor Who: Adventures in Time and Space RPG Review 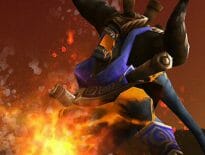