You are here: Home / GameWyrd / Echoes from the Wyrd / RPG Previews: Blood and Guts | Echoes #11

The job of the Air Force’s elite Pararescue Special Operations Unit is to parachute into enemy territory and recover downed pilots, providing any necessary medical attention, and escorting them to safety. If injured personnel are too injured to be moved, the Pararescue unit stays with them until a rescue is possible, making contact with any friendly indigenous forces if possible.

Pararescue was born in the Second World War, when the crew of a C-46, 21 men, ditched into an uncharted jungle near the China-Burma border. Lt. Colonel Don Fleckinger, and a volunteer unit of medical corpsmen, parachuted in, and with the help of friendly natives, tended the wounded for more than a month before escape was possible.

In peacetime, the Pararescue acts as an elite search and rescue force during times of natural disaster, assisting Coast Guard and allied foreign nations. They also provide emergency retrieval teams to NASA.

Pararescue forces wear maroon berets, and live their motto: “These things we do, that others may live”.

Grace Under Pressure: At 3rd level, Air Force Pararescue characters can add their class level to the following skills once per day: Craft (Chemical), Craft (Pharmaceutical), Diplomacy, Hide, Move Silently, Paradrop, Treat Injury. At 7th level this ability may be used twice per day, and at 9th level three times per day.

Bush Medicine: Pararescue characters are used to performing medicine in less than ideal conditions. At 5th level, the character can perform the following skills without the proper tools or facilities, at no penalty: Craft (Chemical), Craft (Pharmaceutical), Treat Injury. The character may also take 10 on Treat Injury skill checks even while under stress.

The character must meet all prerequisites for any feat taken as a bonus feat.

Blood and Guts also has some new skills, and again I’ve picked a favorite.

Airborne insertions are a powerful military tool for inserting soldiers behind enemy lines for scouting, surprise raids, and special operations. In modern warfare, heavily fortified positions can be bypassed, encircled, and defeated with far less casualties than were taken in past conflicts. This skill allows a character to land precisely where she wishes to, and also allows parachuting under less than ideal conditions (from a very fast-moving craft, a low-flying craft and so forth). This skill also covers preparing equipment to be dropped.

Failing this check means the character lands 100 yards off target for every two points by which his roll missed the DC. Failing a check by more than 5 means the character has landed somewhere dangerous (depending on the situation, a dangerous landing could be in proximity to enemy soldiers, power lines, dense foliage, etc).

Failing the check to safely land in dense Foliage such as a forest means the character has become fouled in the brush 10-100 feet above the ground. Getting down usually involves climbing or simply cutting yourself free and falling the remaining distance.

Failing the check from a high speed or low altitude insertion results in 1-4 points of damage per 2 points by which the character missed the DC (in addition to possibly landing off target, and landing somewhere dangerous). The character may attempt either a Reflex save (DC 20), or a Tumble check (DC 15) to reduce this damage by half.

Forces on the ground need to roll a Spot check (DC 10) to detect incoming paratroopers 1-6 rounds (50-300 ft) before landing. Paratroopers in the air are extremely vulnerable to enemy fire, being treated as flat-footed both while in the air, and for 1-4 rounds after they land (while the soldiers get free of their heavy parachute riggings). A successful Paradrop skill (DC 15) will allow a character to get clear of his riggings in the minimum time (1 round).

For these reasons, soldiers will only be dropped into a hostile landing zone when absolutely necessary. Often Special Operations forces will be sent in first, to make sure an area is secure (neutralizing any enemy forces encountered) before more conventional troops are paradropped in.

For special operations, the HALO, or High Altitude Low Opening method of deployment is considered the ideal. Troops are dropped from extreme altitude, making the presence of aircraft harder to detect. The soldiers so deployed then wait until they are extremely low before deploying their parachutes. HALO landings are only spotted by forces on the ground on a Spot check of 20 or higher, and if a HALO drop is spotted, forces on the ground only have 1-2 rounds at which to attack the incoming Paratroopers.

LALO, or Low Altitude Low Opening method of deployment is also very popular, used when aircraft must come in under the radar of a potentially hostile group, or to avoid a diplomatic incident. LALO insertions are risk, as the soldiers are pulled from the craft, their chute opens, and they hit the ground, all in under a minute. On a LALO jump, characters receive 2d6 points of subdual damage from the stress and impacts of the jump.

I know this is a radical thing to include in a book- and you will find this hard to believe, but Blood and Guts has some new feats as well! Just to give you a taste of the book’s flavor, I’ve picked a couple of nice ones.

This character represents extensive training in small unit tactics. When the character takes this feat, he chooses one group for it to work with, such as the SEALs, the Rangers, the 82nd Airborne, and so forth.
Prerequisite: Allegiance (Specific Team)
Effect: Whenever the character is in an engagement with someone with the Teamwork feat for the same team (Army, Navy, Air Firce, Marines, Police, and so forth), he gains +2 to attack and skill checks. Each character serving on an artillery crew with this feat reduces the loading time of the weapon by one round. Characters with this feat can use hand signals to communicate simple information, such as “You and Johnson go left and keep your eyes open, I will go right”.
Special: Characters who have this feat gain a +2 bonus on Promotion checks (team players just fare better in the military at Promotion time).

A new type of ability unique to Blood and Guts, characters who are on Active or Reserve Duty (treated as Allegiances in the game) can take additional training, in the form of a feat. This can either be an MOS (Military Occupational Specialty- your military job) or a training course such as Jungle Warfare. These packages work a lot like Occupations, and represent the fact that an Army Medic, and an Army Infantryman both received some different training,

Arctic Warfare College (All)
Description: The character has learned how to fight and survive in arctic terrain.
Skills: The character gains a +1 bonus to attack rolls, and a +2 bonus to the following skills in arctic terrain: Balance, Climb, Demolitions (for rigging avalanches, landslides, and cave-ins), Drive, Hide, Knowledge (Tactics), Spot, Survival. Characters with this training are also proficient in the use of skis, which negate any movement penalties due to snow/arctic conditions.

Description: The character is trained in combat construction and bridge laying, as well as mine laying and mine removal.
Skills: Choose any three of the following as permanent class skills: Craft (Chemical), Craft (Electronic), Craft (Mechanical), Craft (Structural), Demolitions, Disable Device, Drive, Knowledge (Technology), navigate, Repair, Search, Survival. If a skill the character selects is already a class skill, he or she receives a +1 competence bonus on checks using that skill.
Feat: Surface Vehicle Operation (Heavy Earthmovers and Bridgelayers)

It’s not all work for our men and women though, there’s also glory. Blood and Guts allows you ambitious types to rise in rank, gaining privileges as you ascend the ranks of your branch of service. Rank gives bonuses to Requisition checks, and a Wealth award when you leave the service (in the form of benefits, scholarships, pensions, and so forth). Let’s look at the Army Enlisted ranks for a peek. There’s a table like this for each branch of service, for the Enlisted, Warrant Officer, and Officer ranks.

But Wait There’s More!
I could go on, but I don’t want anyone to fall asleep. Just to let you know what else there is, Blood and Guts has a system for gaining medals, new combat rules to make the game more realistic, or downright gritty, aerial combat, indirect fire, and submarine warfare combat rules, Small Unit Combat rules (not really mass combat, but enough to run engagements with 100-500 combatants on each side without losing your mind), new weapons, and over 50 new vehicles, including some never seen in d20 Modern before, such as fighter jets, bombers, and submarines. 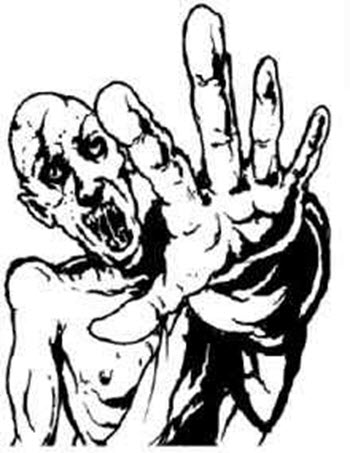 Echoes from the Wyrd RPG Previews: Dark Lore | Echoes #11
💰 Copper Coins 💰 Geek Native is an affiliate and may earn commission on purchases you make from third-party sites.
🍪 Privacy & Cookies 🍪 The site uses cookies to survive. By accessing the site, you agree to use your browser to control cookie use or take 1d4-3 privacy damage (tracking). If you defeat cookies via ad blocking, please consider the Patreon. An intro to cookies, and how to control them, can be found here. I Manage Cookies