When considering the actions of a raider at sea, the distinction is often made between a pirate and a privateer. A pirate is a raider that does not recognize any established governmental authority, and is generally free to attack whichever Prize seems most lucrative and opportune. A privateer, on the other hand, is generally in possession of a letter of marque, given to him by a governmental authority, which authorizes him to raid ships of a particular enemy. In essence, a pirate is a bandit, free to choose his victims, while a privateer is a mercenary, whose pay comes in form of the loot he can gather from the enemy. Of course, from the point of view of the victim, it does not matter much whether the attacker terms himself a pirate or a privateer. In fact, many pirates have good reputations and will fight honorably. Some pirates have even established such firm control in a local area that they are in effect a governmental authority in and of themselves. A few pirates have used such positions of power to negotiate legitimacy within a recognized government, perhaps being rewarded with the designation of admiral of the new royal navy that used to be their pirate fleet. Conversely, the label of privateer in no way guarantees that the raider will fight honorably, and may actually result in more bloody battles due to the enmity between the enemies.

The Code of Conduct

It may come as a surprise to many that pirate vessels tend to be run democratically. The pirate venture requires that each man be willing to undergo severe hardships and endure violent dangers, in order to perhaps achieve a comfortable retirement. The type of people that are drawn to this sort of life are daring and adventurous. They depend on each other for survival, and consider each other equals in the dangerous undertaking they have joined – a company of fellows. On most ships, all pirates are required to sign the Articles of Conduct particular to their ship or company, so that everyone knows what is expected, and what they will receive for their work. They may live outside the law of the land, but they are bonded together, and live by a law of their own, which is respected and followed by all from captain to common sailor. 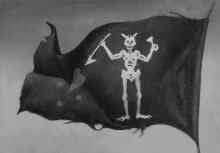 Many decisions on a pirate ship are arrived at by majority vote. One of the most important votes is to decide on the captain. This is often the person who owns the ship, but not always. Once a captain is decided, his orders are final in the case of a battle or similar situation. But apart from that, the captain will not necessarily make the decision on important matters, it could be decided by a majority vote. This level of independence and freedom is frequently much greater than a lawabiding citizen under a feudal system can expect. However, when a person decides to walk away from a conventional life, and sign the articles of a ship, they know that the chances of returning to their former way of life are slim to none. They may never return, dying on the seas, or they may become wanted criminals in their homeland.

As mentioned in the Articles of Conduct, if a pirate loses a limb he will receive compensation commensurate to the type of limb. Table 1-2 expands on this list with common payments. Note the fact that the compensation for a right arm is higher than for a left arm, assuming the person is righthanded.

The Articles of Conduct

There is a defined hierarchy on board of a pirate ship, which follows the most important functions. This hierarchy is not geared towards who has more say on board, but what the chain of command is in any particular situation.

Many people have a misunderstanding about the role and authority of the pirate captain. Most pirate captains are elected by the ship’s crew, and need to possess qualities of leadership and courage that inspire their crew to follow them and rely on their acumen in battle. A captain is expected to be daring and decisive during any engagement. The captain is commonly looked upon with respect, as a knowledgeable leader of men, and if the crew starts to feel he does not fit this role they will throw him out when the next chance for a vote arises. During chase or in a battle the captain’s power is absolute and he can discipline anyone who disobeyed his orders. He also has life or death power over anyone taken as prisoner. The captain usually has skills in navigation and seamanship. But first and foremost he has to have the type of personality required to hold together a rowdy crew of seamen.

This is the officer in charge of piloting, navigation, and the actual sailing of the ship. He determines the course and looks after any and all instruments needed to navigate the ship. Since the skills of a sailing master are very specific and valuable on any ship, many have to be forced into pirate service. 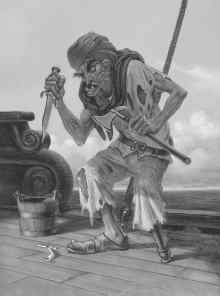 A boatswain’s duty is to supervise the maintenance of the ship and its naval provisions, such as tar, pitch and tallow, spare sails, etc. He must inspect the ship, sails and rigging each day, and report their condition to the quartermaster or captain, as appropriate. The boatswain is also in charge of all deck activities, such as weighing or dropping anchor, and handling of the sails.

The carpenter’s duty is the maintenance and repair of the wooden hull, masts and yards. He works under the orders of the boatswain. The carpenter checks the hull regularly, repairing it as needed. The carpenter has no authority and cannot give any orders; nonetheless he is a privileged person, and on many ships receives a slightly larger share than the rest of the crew.

The master gunner is accountable for the ship’s guns and ammunition. This includes sifting the gunpowder, to keep it dry and prevent it from separating; making certain that the cannon balls are free of rust, and that all weapons are in good repair. A knowledgeable gunner is essential to the crew’s safety and effective use of the ship’s cannons. Many ships seek to attract an Artillerist to their crew.

On large ships there is quite often more than one mate aboard. The mate serves as apprentice to the sailing master, boatswain, carpenter and gunner; helping out wherever he is needed. He takes care of the outfitting of the vessel, and makes certain that the ship is amply provided with ropes, pulleys, sails, and all the other rigging that is necessary. When in port, the mate is responsible for the repair of cables and anchors, and manages the sails, yards and mooring of the ship.

The surgeon is responsible for the fitness of the crew, and the treatment of the sick and wounded. As another person with critical skills that are sought after in many places, the surgeon is also often an unwilling recruit on a pirate vessel. Accordingly, the surgeon may not be allowed to leave the vessel on which he is engaged before the voyage is accomplished, either for boarding parties or for shore leave.

The common sailor, who is the foundation of the ship’s operation, needs to know the rigging and the sails. He needs to understand how to maneuver the ship and how to sail under different wind conditions. A good sailor can discern weather patterns, read the stars, and, most importantly, can anticipate the wishes of his commanders. A ship’s crew must work together in careful synchronization to maneuver a large sailing vessel while tacking or wearing the vessel, or while docking or weighing anchor. A capable crew is critical during battle maneuvers, when the exact position of a ship makes all the difference. 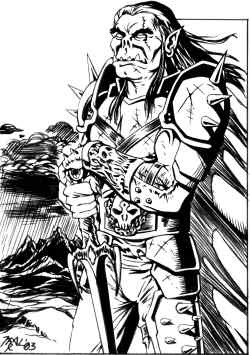 Echoes from the Wyrd RPG Previews: Character Customization | Echoes #11…
💰 Copper Coins 💰 Geek Native is an affiliate and may earn commission on purchases you make from third-party sites.
🍪 Privacy & Cookies 🍪 The site uses cookies to survive. By accessing the site, you agree to use your browser to control cookie use or take 1d4-3 privacy damage (tracking). If you defeat cookies via ad blocking, please consider the Patreon. An intro to cookies, and how to control them, can be found here. I Manage Cookies