The infra-red laser is a special laser with a coated discharge lens that filters out all light except for that emitted at .01 cm wavelength or greater – in effect, generating a beam exclusively in the infra-red spectrum. Though the IR laser is substantially low-powered when compared with other laser weapons (it produces far less energy with each discharge), the IR laser is totally invisible except when viewed with IR goggles (which show the beam solidly).

IR lasers are unaffected by smoke, but are impeded by glitter as normal lasers.

The laser rifle was the standard weapon of the American armed forces before the fall of human civilization. Compared to the military laser pistol (the standard sidearm), the laser rifle is a much more effective battlefield weapon. Incorporating a longer barrel and balanced shape, with superior artificial refining crystals and focus mirrors that allow it to retain tighter photon-beam cohesion at greater distances, the laser rifle’s range is well above that of a conventional chemical-propellant rifle.

The so-called “x-laser” is a bulky and difficult energy weapon to employ. The common x-ray device used in all Ancient-era medical facilities shares the principle behind the x-laser; high-speed electrons, creating an emission of “x-rays”, bombard a tungsten or yttrium “target” inside the weapon. These rays are quite potent, able to penetrate a far greater amount of tissue and materials than most forms of radiation. Unlike the relatively harmless x-ray machine, however, the weapon version of this technology emits rays at a shorter wavelength, causing a more violent “disruption” effect. 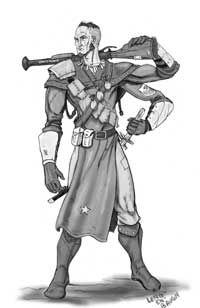 The x-laser causes damage mainly by breaking down and disintegrating the tissues its beam contacts. In addition, an x-laser can fire straight through walls and other obstructions without reduced effect against targets concealed behind them. The x-laser can penetrate 20 feet of cloth, wood, or similar animal or vegetable matter. It can penetrate through up to 10 feet of stone, 10 inches of iron, steel, copper, and brass, but cannot penetrate lead, gold, or platinum. Often an x-laser will be mated with X-ray goggles to allow the firer to see through walls and identify targets behind them to fire at.

X-lasers do not have a continuous wavelength mode.

The mutant’s hair and bone growth has become accelerated and pronounced on the head area, and a pair of “horns” (or even “antlers,” with advanced development) has grown on her head, allowing her to make a gore attack.

Benefit: Mutant gains a natural weapon, allowing her to make a gore attack for 1d6 damage.

Advancement: Each advancement of this mutation increases the damage dice of the attack in the following progression: 1d8, 2d6, and 2d8.

The mutant’s tendons, muscles, and cartilage have developed to allow for extreme stretching without tearing. This permits the mutant to extend her arms, legs, neck and torso to almost twice their normal length without ill effect.

Benefit: By extending her limbs, the mutant can add 5 feet to her reach. Optionally, the mutant can instead increase her base speed by 5 feet. (She cannot do both simultaneously, however). Elongating her body stresses the tendons and muscles and cannot be maintained indefinitely without harm. A mutant can elongate for 5 rounds per Constitution modifier per day (minimum 5 rounds). The mutant also enjoys a +4 bonus to Escape Artist checks.

Advancement: The first advancement of this mutation doubles the number of rounds the mutant can maintain elongation. Each subsequent advancement adds 1 to the multiplier (x3, x4, etc.).

The mutant has a spinal deformity that manifests as a pronounced hump on her back.

Penalty: This defect causes a slight hindrance to movement, reducing the mutant’s movement speed by 5. The mutant also suffers a –1 reduction to his Charisma score.

Advancement: Each advancement of this defect decreases the mutant’s speed by 5 feet and Charisma by -1.

The calcium deposits in the mutant’s skeletal system have been replaced with other minerals (cadmium being the most prevalent in this post-holocaust environment). This mineral substitution weakens and deforms the bones and causes brittleness.

"Abandon the search for Truth; settle for a good fantasy"
Echoes from the Wyrd 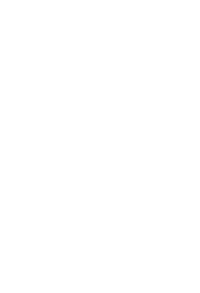