You are here: Home / Games / Tabletop & RPGs / An interview with Paul Elliott of 43AD

Paul Elliott of Zozer Games is responsible for a number of Traveller products like Outpost Mars, the Vietnam roleplaying game GRUNT and more recently 43AD. At the start of the month, Geek Native posted a look inside the game to reveal Roman soldiers, the grim life of the native Britons, druids and ancient horrors. Paul has kindly agreed to talk a little bit more about 43AD and his work for us.

How would you describe 43AD to experienced gamers?

What do they call it? An elevator pitch? I suppose in a nutshell, it’s my reaction to watching the werewolf movie Dog Soldiers: “this movie would be so much more terrifying if the soldiers were Roman legionaries lost in the wilds of Scotland, and if the clan of werewolves were a cursed tribe of Iron Age Britons!” … result a couple of years later: 43AD! Its a fast and violent game of Roman legionaries in the hostile and grim land of Britannia, a place where the local tribes are scared to death of the horrors all around them. 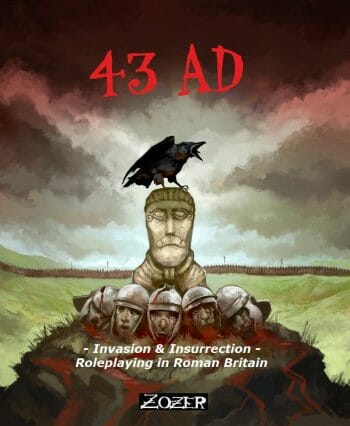 Do gaming groups need to have a good understanding of Roman Britain in order to get the most out of the game? Any tips on quick and easy ways to read up on the era?

Any type of horror requires a basis in normality, the mundane, and the horror is the wrench from normality. In my opinion everyone knows something about imperial Rome, you know, togas, orgies, chariots, those straight roads and penchent for vomitting up the 3rd course to make way for the 4th… if players take on the roll of legionaries they can use that basic knowledge we all have. Britannia is really an unknown, the players are best served not knowing much about iron age Britain to be honest. For the referee, sure there’s a bit of reading, but as I say in the book, it isn’t a history lesson, use what you now, pick out aspects of the setting you like, add a dash of the movies and play the game. I mean, I wrote it to be as accurate as I could, but you’ve got werewolves and vengeful forest demons in the mix, so wearing your sword on the wrong side is hardly a great faux pas!

It is said you’re a bit of an expert on the 4th century period. Where does all this knowledge come from? How did you get involved?

Its a long story that began with a chance book buy at WHSmiths in the 1980s, John Warry’s Armies of Greece & Rome that got me interested. Buying RuneQuest then got me hooked on ancient history and I pursued it academically to degree level, and then continued to write history books. It was only in 2002 that I began to dabble in re-enactment, making slings, attending courses in bronze casting and flint knapping… today I’m a re-enactor who can turn up as a fully equipped Roman legionary or an iron age warrior. Roleplaying taught me the value of everyday items, the life of the poor and humble and gave me that desire to know all those annoying details. Let’s face it, when you’re a referee, players ask you for all those annoying details, don’t they?!

Where did the inspiration for the game come from? Why make dark horror such a feature?

I have played several ‘straight’ games of 43AD where there has been no horror content. It was just tribal shennanigans, double-crosses and mysteries …. but if you want realism, you really need to factor in the beliefs of the locals, and they believed in some truly horrible things. One thing convinced me to make horror ‘real’, and that was an archaeological report that featured a deep pit cut into the chalk downs, in Wiltshire. Excavators discovered the skeleton of a woman at the bottom, tied to a short post, evidently some sort of sacrifice. But…to what? What lived underground and so scared the locals for them to sacrifice this girl? I thought of rock spirits, earth golems and of course the ‘crawlers’ from Neil Marshall’s fantastic movie The Descent, and shuddered… 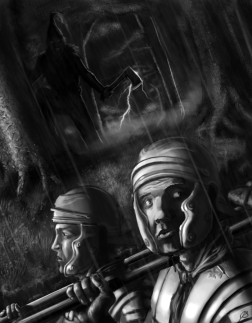 What tips would you give to GMs and players in order to get the most out of the setting and feeling? How can they contribute to the style of the game?

I hesitate to recommend books, because that’s alot to ask your players, but a Simon Scarrow book will see you right for atmosphere. There are plenty of military buddy movies out there, and if you emulate the style of those, a disparate group of men trying to wade through strife, terror and trouble, united by a determination and hatred of the enemy, you will be halfway there. The rules for combat are very fast and fluid because to me, that’s more realistic than modelling the motion and cutting penetration of a shortsword. Speed, lack of time to think, too much to do and not enough time to do it, a couple of rolls on the d6 and there’s blood on your gladius and someone’s screaming – best hope its not you…

Work on 43AD began in 2007. This has been a 5 year project for you. Was that because the book itself proved challenging to complete?

You have high level sources Andrew! How did you know that?! 43AD was actually written by me as a commission for a gamer I’d met once, but knew primarily through RPG.NET. This gamer had funds ready to publish 43AD, and had hired artists for the cover, maps and illustrations but at the same time the manuscript delivered, my friend was hit by a double ‘life crisis’ that essentially brought the whole thing to a shuddering halt. I sat on the game for several years before dusting it off, and giving it an extensive rewrite and adding scores of new sections. So, 43AD began life as a commission!

Warband is the follow up book and its own in PDF format already. How does Warband expand the 43AD gaming universe?

Some game books are big. Some are too big. I wanted 43AD to be readable and playable. That meant leaving out a whole section on playing from the other side of the equation, playing iron age warriors and druids on their home territory rather than invading Romans. My main motivation here was to run ‘Robin Hood style guerrilla scenarios for my own players. But there’s so much else you can do with the Britons, inter-tribal wars, long quests into the Celtic supernatrual wilderness, druid magic … but it needed its own book. Hence Warband.

43AD has been picked up by Chronicle City. A book will be available a little later on this year. What does that mean for the series?

Well I’m certainly hoping Warband will follow in print; working with Chronicle has been great, getting a game like this out in print means the world. I routinely run games using PDFs, but as an old school gamer, nothing gives me greater pleasure than rolling real dice on a large fold-out map and cracking open a softback roleplaying book.

What’s next in the series?

Well, the Roman Empire is big and there are places far to the East that certainly merit the attention of a grizzled bunch of legionaries. So, next, we may Go East!

An interview with Paul Elliott of 43AD