Technically Blood-C: The Last Dark is a sequel but the creative team re-jigs things slightly and the film stands on its own two feet. I didn’t notice or mind that I hadn’t seen any of the previous anime.

Action kicks off in a train. A vampire looses control and goes on a face eating rampage. As it happens one cool and calm, sword welding, school uniform wearing girl on the train turns out to be a practised vampire slayer and battle ensues.

The vampire escapes from the train, grabbing a woman and carrying her off.

This sets up the film. It turns out that the kidnapped woman is a hacker working for an underground youth organisation trying expose a sinister organisation called The Tower.

The Tower is responsible for a wave of anti-Internet and anti-young person laws. This is an anime that features Twitter.

It also turns out that The Tower and the people involved are responsible for orchestrating a mass murder of which are vampire slaying school girl hero is the sole survivor. I imagine this is where previous Blood and Blood-C plots have unfolded but it doesn’t matter. What matters is that the hackers and the hunter both have beef with The Tower.

It’s always hard doing hacking in a visually dramatic way. Blood-C does pretty well; concentrating mainly on the characters and their personalities with only the occasional view of the screen.

Whenever the hackers do manage to dig up evidence of where Tower officials might be is a queue to deploy our suspiciously red eyed vampire slaying hero into a combat scene.

There is politics and intrigue in Blood-C: The Last Dark and even enough plot depth and twists to keep your attention. Mainly, though, this is a clever visual treat. The combat is slick and well choreographed.

It’s worth noting that the Blood series was partly initiated by the desire to showcase (at the time) advanced computer animation techniques, such as night-time scenes, and this heritage shows clearly in The Last Dark.

Vampire anime fans should have no problem sinking their teeth into this Blood-C. 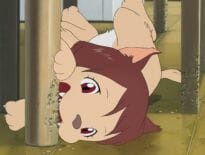 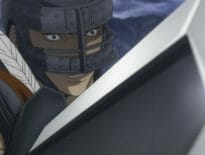