You are here: Home / Books / A review of Dead Space: Catalyst 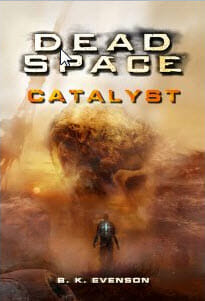 I liked the blood splatters.

That was my first impression of Dead Space: Catalyst. Titan Books had given B. K. Evenson’s Dead Space novel a small but effective treatment and decorated the chapter numbers with a splash of black and white blood.

A few pages into Catalyst and I thought I had the book pegged. In hindsight that was an obvious mistake. In my defence, very quickly, I was getting Clive Barker vibes from the plot. We had two brothers; one younger and responsible and one older and subtly unstable, dangerous and yet with an alien mathematical genius talent.

Early on the plot shits to a high-security prison. We also discover that EarthGov are now tinkering with alien puzzle boxes – the dreaded Black Marker.

What we don’t have is the Dead Space gore.

I have to wonder whether there is an expectation trap. Will die hard Dead Space fans reach for Catalyst, eager to space zombie action, only to be given a thriller of building tension? Will there be disappointment? I think there’s chance. From my perspective and for this review – the building start to Catalyst works well. It brings an extra width to the franchise and gives it some gravitas.

Dead Space: Catalyst is set some 250 years in the future. We’re still building up to the events of the computer game and we’re after B. K.’s first Dead Space book – Martyr. In some ways this is a mythology building book but it does so in small steps and with background only.

When I said there was no gore in Catalyst I was, of course, referring to the lead into the crisis. Crisis seems inevitable in the Dead Space universe. By the time we reach the closing chapters of the book the blood splatters are not just clever typography on the chapter numbers. This should satisfy the guro fans.

Dead Space is a game I prefer to watch being played than to play myself. I note that because I quite enjoyed Catalyst. It appealed to my desire to get deeper into the world without having to wrestle through too many Necromorphs in order to so – and yet, of course, without enough Necromorph menace it wouldn’t be the same.

A review of Dead Space: Catalyst

Sites The Lord of the Rings Project
💰 Copper Coins 💰 Geek Native is an affiliate and may earn commission on purchases you make from third-party sites.
🍪 Privacy & Cookies 🍪 The site uses cookies to survive. By accessing the site, you agree to use your browser to control cookie use or take 1d4-3 privacy damage (tracking). If you defeat cookies via ad blocking, please consider the Patreon. An intro to cookies, and how to control them, can be found here. I Manage Cookies