Kickstarter is the most widely recognised crowdfunding site in the world and, this week, it announced UK launch dates. Publishers can create projects already but cannot begin funding campaigns until Halloween.

It’s worth, just briefly, considering why this is so important for gamers. Kickstarter makes possible roleplaying games, books and miniatures that would otherwise have been impossible. Games are worth millions to Kickstarter, even if they might be unwilling to say ‘roleplaying’.

Not all roleplaying projects on Kickstarter succeed – many good ideas fail – but an example of Kickstarter’s potential strength can be seen in Reaper Miniature’s $3 million success.

It goes without saying that Three Million Dollars is a hell of a lot of money for any publisher. In fact, we might wonder whether Kickstarter’s launch could even influence Games Workshop’s share price.

Although there is a most unusual blip, almost exactly when Kickstarter made their UK announcement the share price of Games Workshop seems largely unaffected. It’s down slightly. It hovers near 666. 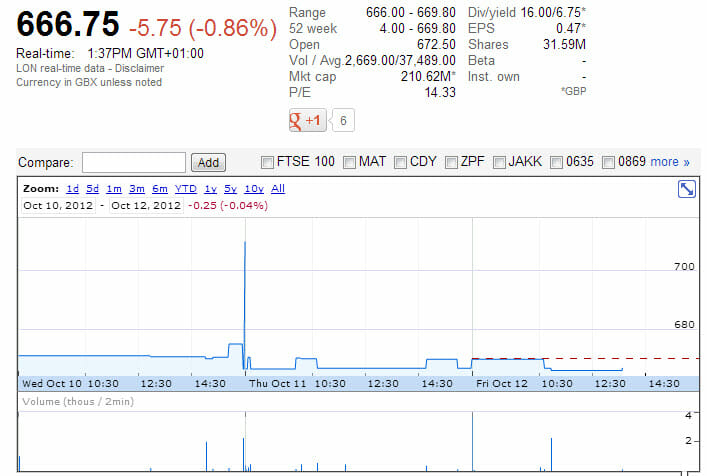 666? Really? Do Games Workshop’s shareholders have a sense of humour? I approve.

Geek Native reached out to Games Workshop for a comment – not on whether their shareholders are holding the price at 666 for a laugh; but on whether they had any opinions on Kickstarter’s UK launch, especially given Reaper’s success. They are yet to comment.

Whereas Games Workshop have been silent, other British based RPG authors and publishers have responded to Geek Native’s requests for insight.

The tl;dr is this – largely positive, but some concerns enthusiasm may be waning.

Kickstarter launching in the UK is obviously going to support the UK gaming scene. WE’ve had alternative crowdsourcing platforms at our disposal (Indiegogo being the main one) but there is no denying that Kickstarter is the dominant platform for crowdfunding, and especially in the RPG/Board games category. They have more name recognition than their competitors and with the social networking ‘Friends’ aspect of the site you get an instant way of being able to have your campaign go viral as everyone who follows you on Kickstarter will be notified when you launch a project and all of their friends will be notified when they follow a project. I’ve found that an invaluable method of discovering new projects and it can only help UK publishers to be able to have that visibility for their projects too.

It can potentially help the UK scene, but the Kickstarter ‘fad’ seems to be fading a bit and there have been other services (IndieGoGo for example) available for some time. How much impact it will make and how long it will be before Kickstarter fatigue sets in fully… I don’t know. British ideas tend to be a more quirky and edgy and Kickstarter’s ‘family friendly’ nature and limited options may prevent it being the best choice.

Absolutely, the UK has a wealth of gaming experience and, even more importantly, a creative drive not seen anywhere else in the world. This is a chance for many UK designers and writers to put forward their ideas and to develop their worlds without the influence of other, more controlling, companies that might perhaps steer them in the wrong direction (creatively). This is a truly great opportunity for anyone wishing to get their work out there.

Have Kickstarter got the balance between not being a pre-order engine and allowing supporters to earn products through pledges right?

I’m not sure because I think a lot of people using the site see it as a gameified pre-order engine. No matter what Kickstarter say or do, most people will stick to that view.

I think it’s down to the pledger and the pledgee. I don’t like seeing so much control. Buyer beware.

I think so. It gives the opportunity for fans to offer patronage and support, to see their dream project become a reality and to be a part of the process. It gives designers a means of being able to propose things they might not otherwise be able or willing to offer (particularly in the current economic climate).

What sort of British launched Kickstarter campaign would you like to support?

6d6 of course! More generally, I would like to see some Kickstarters with a real British flavour and cultural references the American won’t understand. Such as ‘NHS: A Role-Playing Game’.

Our own, of course!

I’m launching a campaign on the 31st so we’re rather hoping people sponsor my campaign.

I’d personally like to see more gaming developers free to explore new ideas and to create new worlds and new civiliza… Oh that’s Star Trek. Sorry. Ahem, yes, this is an opportunity for those designers who have previously gone unseen, to really shine.

I wouldn’t back a campaign purely because it was British based. I’d back it because it interested me and the extras available through the Kickstarter campaign meant it was worth me backing it *now* instead of just getting a copy when the project was eventually released and in stores. There is a lot of British talent out there and I’m looking forward to seeing what projects come through the ranks.

What about you? Do you think Kickstarter’s arrival in the UK is a good thing for British gaming? Or do you think the fad is dying out?